By Simeon Gholam at the Kiyan Prince Foundation Stadium 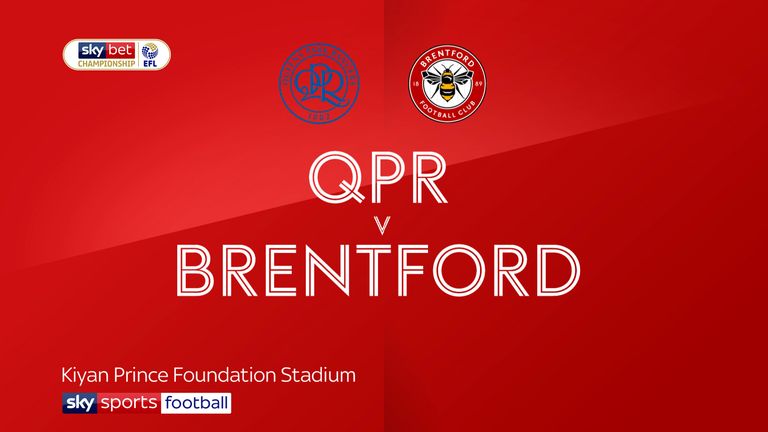 Highlights of the Sky Bet Championship clash between QPR and Brentford

Brentford were victorious in the west London derby as an Ollie Watkins double helped secure them a 3-1 win at QPR on Monday night.

Watkins headed the Bees in front after 23 minutes at the Kiyan Prince Foundation Stadium, before Grant Hall equalised for QPR after 48 minutes.

Brentford then sealed the win from the penalty spot as Said Benrahma struck on the hour, before Watkins struck again deep into stoppage time. The victory saw Thomas Frank's side secure back-to-back away wins and rise to 12th in the Sky Bet Championship table.

Bright Osayi-Samuel and Grant Hall came into the side for QPR, as Jordan Hugill and Yoann Barbet missed out. Brentford were unchanged.

How Brentford claimed the bragging rights in west London

Bryan Mbeumo missed a glorious opportunity to put Brentford in front after 16 minutes after being slipped clear into the QPR box by Josh Dasilva, seeing his effort saved by Liam Kelly, but he atoned for his effort by creating the opener seven minutes later.

Picking up the ball out on the right, the winger crossed beautifully for Watkins, who arrived unmarked at the near post to glance a header past Kelly, who got a touch but could not do enough to keep it out.

Three minutes after the break, QPR were level. David Raya did brilliantly at first to tip a Nahki Wells header wide of the post from Ebere Eze's free-kick, but Eze then whipped the resulting corner in for Hall to nod home at the near post.

Parity for QPR was shortlived, however. Josh Scowen was the guilty party just before the hour as he brought down Mbeumo in the box, and Benrahma stepped up to send a pinpoint penalty into the top corner.

QPR could have gone second with a win over their fierce rivals, but Watkins netted from close range in the fourth minute of added time, having latched onto Mathias Jensen's cross, meaning the hosts remain in eighth in the Championship table.

Any hopes of Brentford lacking a focal point and a goal scorer this season after the departure of Neal Maupay in the summer have been dispelled thanks to the impact of Watkins, who has adjusted superbly to life as a central striker, grabbing his ninth and 10th goals of the Championship season to put QPR to the sword.

QPR boss Mark Warburton: "First half, we didn't move the ball quickly enough. We fell into their trap and deserved to be 1-0 down. Second half we were much better, we got the goal back and looked in the ascendancy.

"It was always going to be a tight game with fine margins and I've got to say it was a very, very soft decision [for the penalty]. Again it's cost us. I didn't want to come in and bemoan the penalty but that's a poor decision."

Brentford boss Thomas Frank: "We all know how much it means to everybody - the fans, the players and the staff. It's a massive win for us, but it's also three wins in a row, which is a good step for us.

"I need to praise [Watkins] first and foremost. He has developed into a clear No 9, having been a 10 or a winger in the past, and praise the staff who have worked very hard with him to get into the right positions. The first goal was a real striker's goal."

Both sides are back in Sky Bet Championship action at 3pm on Saturday. QPR head to Leeds, and Brentford host Huddersfield.