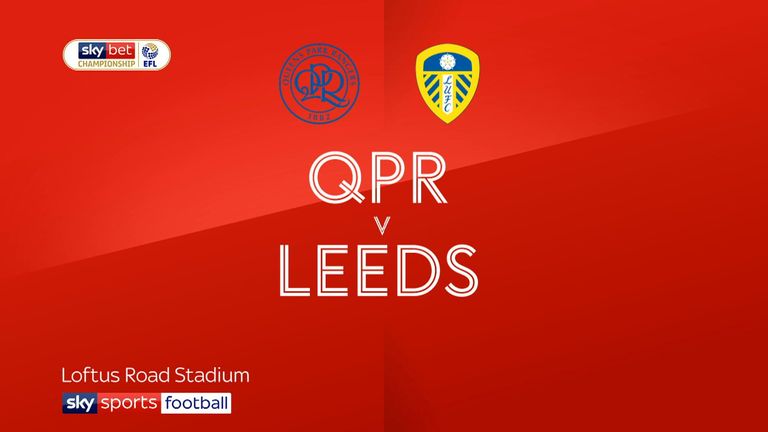 Highlights of the Sky Bet Championship game between QPR and Leeds.

The midfielder cleverly flicked home Massimo Luongo's cross from close-range just four minutes into the second half to cap an impressive return to the side having missed Saturday's 2-0 defeat to Middlesbrough.

Leeds had placed their hosts under intense pressure at times in the second half, but their failure to convert early chances, coupled with some intelligent saves from Rangers stopper Joe Lumley ultimately cost them.

Man of the match: Luke Freeman

The stakes were high for both sides going into the clash in west London. For Rangers it was a chance to arrest the drastic slump in form that had seen them fail to win in nine league outings; for Leeds, winning their game in hand would see them move a point clear at the top of the Championship.

Backed by a raucous away following, within seconds the visitors had their first sight of goal. Tyler Roberts freely waltzed through the middle of the park and dropped off to Pablo Hernandez, who put a shot wide of Lumley's right-hand post.

At frequent intervals, the visitors turned the screw and peppered QPR's goal with shots, but each time they returned without reward. Lumley tipped over Kalvin Phillips' flick, before Hernandez's low cross was missed by the onrushing Bamford at the far post just after half an hour.

Four minutes after the restart, though, the Freeman capped an energetic return to the side by giving Steve McClaren's men the lead with a close-range flick from Luongo's cross into the six-yard box.

Marcelo Bielsa named an unchanged Leeds side following his side's 2-1 win over Bolton on Saturday, while Steve made two changes as he looked prevent an eighth straight league defeat.

Ryan Manning and Tomer Hemed, therefore, made way for Nahki Wells and Luke Freeman, the latter of whom returned having missed Saturday's defeat to Middlesbrough with a slight hip injury.

The hosts' confidence grew almost immediately and after an hour they came close to doubling their lead. Freeman's low shot careered into the path of Nahki Wells, but Kiko Casilla produced a strong save to clear the danger from the follow-up.

Over the course of their seven-game losing streak, QPR had tended to concede late on in games and Leeds increased the pressure inside the final 10 minutes, but Lumley tipped over Ezgjan Alioski's awkward cross and twice denied Bamford as Rangers held on to a much-needed three points.

Man of the match - Luke Freeman

Having turned in a performance full of energy and invention, Freeman got his just rewards when he netted what proved to be the game's winner after 49 minutes.

The 26-year-old could be spotted all over the pitch, tracking back to win the ball back in defensive areas and creating threatening situations for the Leeds backline to deal with. The standing ovation he received upon being replaced by Josh Scowen late on was more than deserved.

Steve McClaren: "[Freeman] showed his real quality and infectious enthusiasm that he gives to the team. When you're looking for leadership and looking for people to have courage and take the ball, he's got all that. He was our talisman tonight. There were a lot of heroic performances but his was incredible.

Marcelo Bielsa: "If you watch the game you can see that this team has much energy. What our team has shown in every game is that we have an excess of energy.