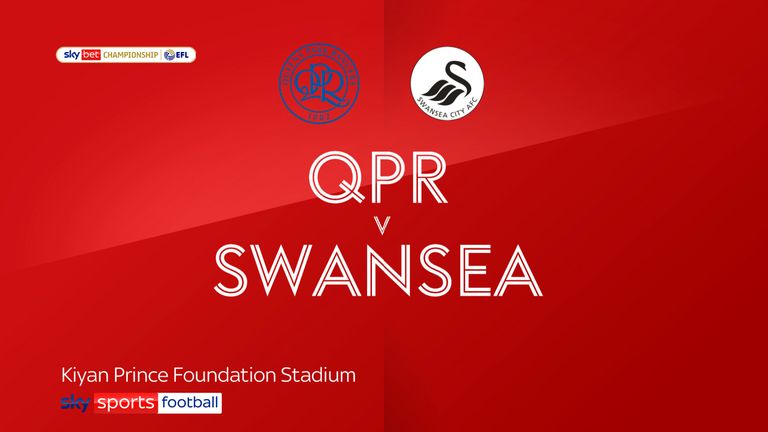 Highlights of the Sky Bet Championship match between QPR and Swansea

Goals from Andre Ayew and Jamal Lowe gave promotion-chasing Swansea a 2-0 victory at QPR and increased the pressure on Mark Warburton.

Rangers have now gone eight matches without a win and Warburton's position as manager is under scrutiny.

There are no such problems for Swans boss Steve Cooper, whose side moved up to second in the Sky Bet Championship table.

Ayew put the visitors ahead in bizarre fashion a minute before half-time.

The frustration was too much for QPR chief executive Lee Hoos, who aimed a foul-mouthed tirade from the directors' box at referee Steve Martin as the officials left the pitch at half-time.

Both sides had created chances during what was a fairly even first half up to Ayew's opener.

Lowe was put through by Ayew's pass but shot straight at Dieng, who later saved a long-range effort from Yan Dhanda.

At the other end, Ilias Chair caused problems for Swansea on the right, serving up a cross which just evaded Macauley Bonne, who also headed over after being found by Barbet's diagonal ball from the left.

Conceding such a soft goal was a sickener for Rangers, who fell further behind after being caught on the counter-attack nine minutes into the second half.

Lowe raced onto Matt Grimes' ball forward and slotted past Dieng - his fourth goal in as many games and sixth of the season.

Warburton had switched to two up front in an attempt to halt his team's slump, pairing Bonne with Lyndon Dykes and dropping winger Bright Osayi-Samuel to the bench.

But Bonne failed to make an impact and missed another decent chance when he was unable to get a firm header to Rob Dickie's cross.

While Dykes has been a revelation for Scotland, establishing himself as their number nine since his summer move from Livingston, he has scored only once from open play for QPR and was easily contained by Swansea's impressive defence.

Cooper's men were more than comfortable, although substitute Charlie Kelman did almost pull a goal back when he was just unable to make contact at the far post with Barbet's cross from the left.

QPR's Mark Warburton: "The table doesn't lie. I can't sit here and sound like an idiot saying 'no we're fine' - the table tells you where we are.

Swansea's Steve Cooper: "I think it's important for Jamal to score in successive games. It was a brilliant goal. Jamal ran in behind and showed great composure and technique to score and he made it look a lot easier than it was. When you play in that position you are always going to be judged by goals and assists.

"At the moment the strikers are playing well. They know they have the responsibility of scoring when chances come and they've got to keep going. I'm really pleased with the win. It was a tight game in the first half and the second half was all about managing the game.