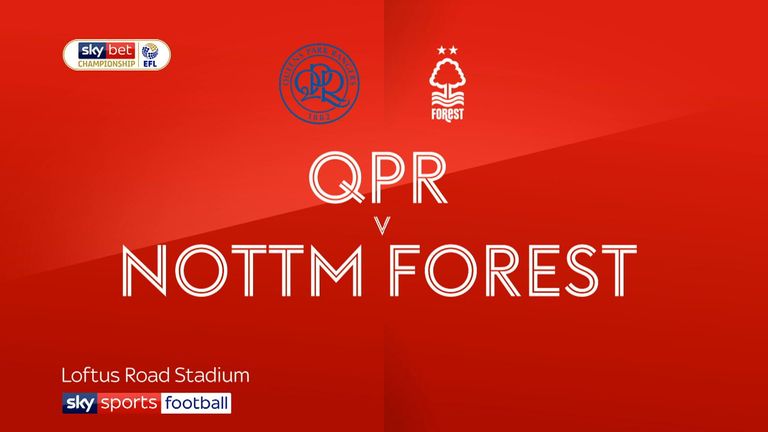 Highlights of the Sky Bet Championship match between QPR and Nottingham Forest.

Ansarifard applied the finish to a lovely move 10 minutes into the second half.

The home side were given a chance to equalise with three minutes remaining when former Rangers defender Jack Robinson was adjudged to have handled Josh Scowen's corner while challenging Matt Smith in the air.

But Wells, on as a substitute, saw his spot-kick pushed away by Pantilimon.

Ansarifard would have scored seven minutes before the interval but for a combination of Joe Lumley and the woodwork.

Rangers were opened up by a clever pass from the outstanding Lolley, who sent Ansarifard through on goal.

Keeper Lumley used his legs to deflect the Iranian forward's shot on to the underside of the bar and then reacted quickly to grab the loose ball as Ansarifard attempted to follow up.

QPR had made much of the early running, with Darnell Furlong heading wide from Scowen's corner and Geoff Cameron heading over a free-kick from Ryan Manning, who later curled a free-kick wide.

As Rangers continued to threaten in the first half, Pantilimon held Tomer Hemed's ambitious overhead kick and an effort from Ebere Eze.

After Ansarifard's goal, Pantilimon twice denied Hemed, keeping out a low shot and a far-post header from the on-loan Brighton man.

It was the 11th home league defeat of a miserable season for QPR, who have won just twice since Boxing Day.

They face a difficult summer of cost-cutting as Financial Fair Play restrictions continue to bite.

Their new manager will be expected to work with a tight budget and develop youngsters as the club look to balance the books.

And there was a full senior debut for Lewis Walker against the club the 20-year-old forward's father Des made his name with as a player.

Walker worked hard up front before being substituted in the second half.

He was replaced by another youngster, winger Olamide Shodipo, who was also lively.

Wells, on the other hand, twice blasted well over after coming on - and then failed to take Rangers' big chance to rescue a point

John Eustace: "That game summed our season up. We haven't been clinical enough. It's something that we need to get right in the summer and recruit players who are winners and want to put the ball in the net.

"It's important that we recruit winners - players who aren't used to losing. I think over the last two or three seasons the standards haven't been good enough and the recruitment is going to be massive this summer. Obviously there's Financial Fair Play and things like that. We need to recruit hungry players who it means everything to them to win games."

Martin O'Neill: "Whether it's a penalty or not seems to be debatable. I would have been very disappointed if we'd have conceded a goal from it. Robbo is absolutely convinced that he didn't touch the ball at all. It seems as if it's come off their centre-forward's head.

"QPR threw everything at us but I think the most clear-cut chances fell to us. The goal that we worked was terrific. I thought we played some delightful stuff and the goal itself was in essence of that."