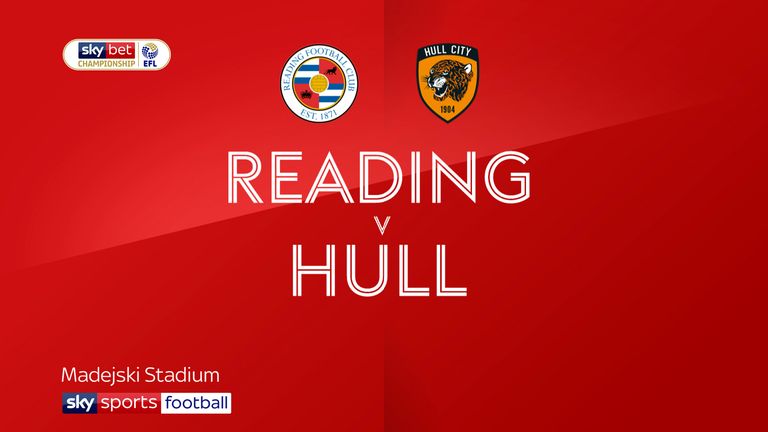 Highlights of the Sky Bet Championship match between Reading and Hull City.

Mallik Wilks struck eight minutes from time to rescue a point for Hull in a scrappy 1-1 draw against Reading at Madejski Stadium.

The point ended Hull's run of four successive defeats as they bounced back from last weekend's 5-1 hammering at home to Brentford.

Hull could have gone ahead soon after the start but home goalkeeper Rafael made an acrobatic save from January loan signing Marcus Maddison's powerful effort.

Maddison broke free on the right and unleashed a fierce cross-shot that Rafael parried on to a post. Jackson Irvine tried to net the rebound but his close-range attempt was deflected wide.

Hull maintained their early tempo but no one was able to get on the end of a teasing left-wing cross from full-back Callum Elder.

Irvine then found space 20 yards out only for his curling effort to drift narrowly wide.

Reading gradually got into the game but, for all their patient approach work, had little to show for it.

When they did manage to penetrate the tight Hull defence, Obita volleyed off target from a Sam Baldock lay back.

Yakou Meite then bore down on the away goal but keeper George Long saved well with an outstretched leg.

Reading continued to press but Baldock, after spinning cleverly in the Hull area, fired hastily wide.

Long made decent stops from Ovie Ejaria and Pele either side of the interval.

But he was at fault when Reading went ahead 11 minutes after the break.

John Swift played the architect, releasing Obita with a short pass inside the Hull box, who escaped attention in the Hull area and slid the ball home from a tight angle.

Long should have done better at his near post but carelessly allowed Obita's shot to squirm through his legs.

Hull's response lacked any real threat but Reading failed to finish them off, missing several chances, and paid for it in the 82nd minute.

Wilks fired goalwards and the ball took a looping deflection over the stranded Rafael and into the net.

Reading's Mark Bowen: "That was definitely two points lost today. My take on the game is that, at times, I thought we looked jaded and fatigued. That was coming out of a really hard-fought win against Cardiff in the week. I thought our passing game was not at it as a team and as individuals.

"You're looking to get on the ball as much as you can, to be in charge of your own destiny. But today it became like a basketball match because we were so sloppy in our passing. We got our noses in front and then we were looking to see the game out. But it was poor defending on our part for their goal and then it's two points lost."

Hull's Grant McCann: "Yes, it stops that run a little bit. Not really with a sense of relief because I thought that, in what we set out to do, we were in control in the first half.

"We frustrated Reading and you could see that by how quiet the stadium went. But as in the Championship, teams are going to have a good spell against you, especially when you're away from home. Reading were good in the second half. You have to give them credit for that. We were a bit disjointed for their goal. But the response of my team to come back, on the back of a bad run, showed great determination and willpower. And, to be honest, we could almost have won it at the end. But we'll take the point and move on."