By Dan Long at the Madejski Stadium 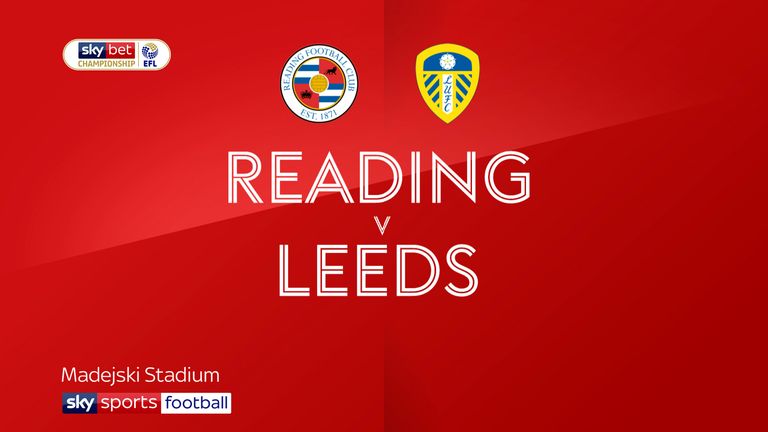 Leeds moved above West Brom at the top of the Sky Bet Championship after a late Jack Harrison goal earned them a 1-0 win over Reading at the Madejski Stadium.

Yakou Meite went closest with a header for the hosts in a first half devoid of meaningful chances for either team, while Stuart Dallas' thunderous drive cannoned off the crossbar towards the end of the second.

But when it looked as though both sides would have to settle for a point under the lights in Berkshire, Helder Costa delivered an inch-perfect cross that Harrison headed home from close range (87) for the Leeds winner.

A fourth successive win sees Leeds sit pretty at the top of the division, for 24 hours at least, with West Brom in action at home to Bristol City on Wednesday night. Reading's second successive defeat leaves them in 18th, four points above the relegation zone.

How Leeds rallied to keep up their title charge

The 1-0 loss suffered by the Royals against Brentford at the weekend brought an unbeaten start under Mark Bowen to a close and such is the beast the Welshman has rapidly transformed them into, they set about putting that right straight away.

Meite looked intent on being the player to inflict early damage and he saw a cross skid across the penalty area after three minutes, while the ever-impressive Ovie Ejaria later danced in from the opposite flank, only to be stopped in his tracks by Dallas.

Marcelo Bielsa made just one change to the side that beat Luton last time out, with captain Liam Cooper fit enough to replace Gaetano Berardi in the heart of the Leeds defence.

Leeds were patient in the build-up and methodical in their attempts to play out from the back, but throughout the first 45 minutes they failed to register a shot on target. They were almost punished minutes before half-time when Meite headed John Swift's corner goalwards but, fortunately for them, Kiko Casilla stood firm.

The tempo increased after the break, with the visitors clearly in the ascendancy. Patrick Bamford, perhaps, should have done better when he met a Mateusz Klich cross at the far post, but, within minutes, Dallas had silenced the home fans when his stunning 30-yard drive was kept out by the woodwork alone.

Hearts were in mouths when the Northern Irishman smashed a volley into the side-netting as full-time approached, but his near-misses were forgotten three minutes from time as Ezgjan Alioski and Costa combined to deadly effect.

The latter was the recipient of a sumptuous cross-field pass from his team-mate, allowing him to clip a cross in towards the six-yard box, where the onrushing Harrison headed over the line to secure the victory.

Reading's Mark Bowen: "That was a very tough one to take . We had a game plan, we'd done a lot of homework and preparation on Leeds. They are a team that creates a lot of chances and dominates play.

"But although they had a fair bit of possession, I don't think our keeper had a real shot to save. So, that's a tick in one box. But I'm a little bit bitter about how it ended."

Leeds' Marcelo Bielsa: "When you are top of the league, it is better than other positions in the table. But it is also true that today, it doesn't mean a lot. The most important thing is what happens in May. Tonight, it was a tight match. It was difficult for us to create danger in the first half.

"In the second half, we changed and we attacked a little more. And enough to deserve the win. We defended well when we had to. Reading's chances were linked only to set-pieces. It was a very demanding match but we were able to stay without conceding a goal. We had patience. This is a signal of our maturity and experience of the team. It showed in the way that we managed the ball, especially in the centre of the pitch."

Man of the match - Ben White

Before his loan move from Brighton to Leeds in the summer, Ben White had not played in the Sky Bet Championship, but you would never have guessed it.

The 22-year-old has, arguably, been one of the best players for Marcelo Bielsa's side this term and he impressed against the Royals, helping to keep Meite and George Puscas' threat to a minimum, while proving a nuisance from set-pieces too.

Reading travel to the DW Stadium to face Wigan on Saturday afternoon, while Leeds welcome Middlesbrough to Elland Road. Both games get kick-off at 3pm.