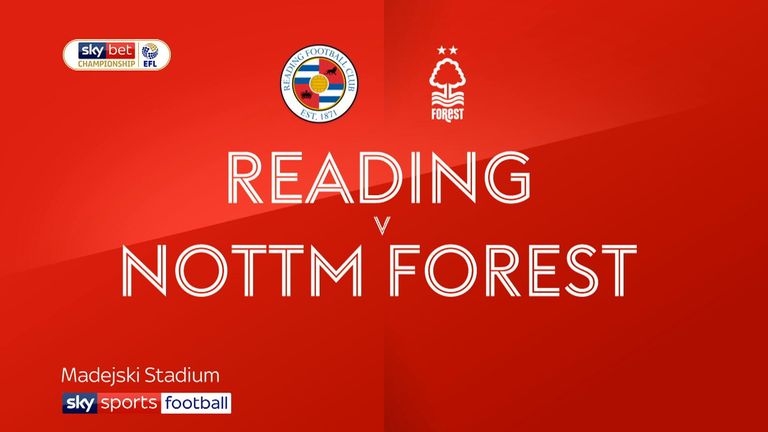 Highlights of the Sky Bet Championship game between Reading and Nottingham Forest.

Managerless Nottingham Forest suffered a setback to their Championship play-off hopes as they finished with nine men in a 2-0 defeat at struggling Reading.

Under the guidance of caretaker boss Simon Ireland, after Aitor Karanka had asked to be released from his contract on Friday, Forest went behind midway through the first half when Royals midfielder John Swift combined well with Mo Barrow to score from inside the six-yard box.

Things got worse for the visitors when captain Danny Fox was dismissed in the 62nd minute for a second booking after a mass brawl, while defender Tendayi Darikwa also saw red and Forest's misery was compounded when Jack Robinson scored an own goal four minutes later.

Following Karanka's departure after 12 months at the City Ground, first-team coach Ireland took temporary charge of a Forest side that had won only one of their past six league matches.

However, they visited Madejski Stadium only four points adrift of the play-off places.

Although relegation-threatened Reading had not won in 10 Championship matches, Forest began sluggishly and could have gone behind in only the second minute.

Jon Dadi Bodvarsson crossed from the right but Ovie Ejaria, making his Reading debut after a loan move from Liverpool, failed to keep his header down at the far post.

Forest survived the scare and built patiently going forward. Daryl Murphy nodded straight at home goalkeeper Anssi Jaakkola from a Ben Osborn corner and Matty Cash was blocked out as he prepared to shoot from close range.

Reading resisted the growing pressure and went ahead in the 23rd minute. Swift released Barrow on the right and quickly raced into the middle of the Forest area to tuck home Barrow's subsequent low cross.

Forest responded positively, with Cash driving wide and Osborn forcing an athletic save from Jaakkola, but Reading hit back strongly, with keeper Costel Pantilimon having to save from Ejaria and Barrow.

Pantilimon did well to tip over a fine 20-yard free kick from Swift in the early stages of the second period before the major incident of the game on the hour.

Murphy badly fouled Swift, for which he was booked. After the ensuing melee between numerous players, referee Oliver Langford issued four more cautions.

Reading's Liam Moore and Andy Yiadom went into the book with Forest's Robinson and Fox, who had received an earlier yellow card and was subsequently sent off.

Ten-man Forest barely made any headway afterwards and were reduced further when full back Darikwa was red-carded seven minutes from time for a late lunge on home substitute Danny Loader.

Robinson then diverted Yiadom's low cross into his own net to gift Reading a much-needed victory.

Jose Gomes: "I'm very happy for Reading. It was not my game. My victory was for the Reading club. It was a very important three points that we got today, three very important points for the future. But we still have 19 battles in front of us until the end of the season.

Nottingham Forest caretaker manager Simon Ireland: "No one is going to win all their games in the Championship. You have to keep yourselves in there, in that pack. We're just below the play-offs (four points) and we're only a couple of results from getting ourselves back in the top six.

"We've got a couple of home games coming up against Bristol City and Wigan so we can do that. Today was just an off-day."