Yakou Meite and Mo Barrow score as Reading move away from bottom three. 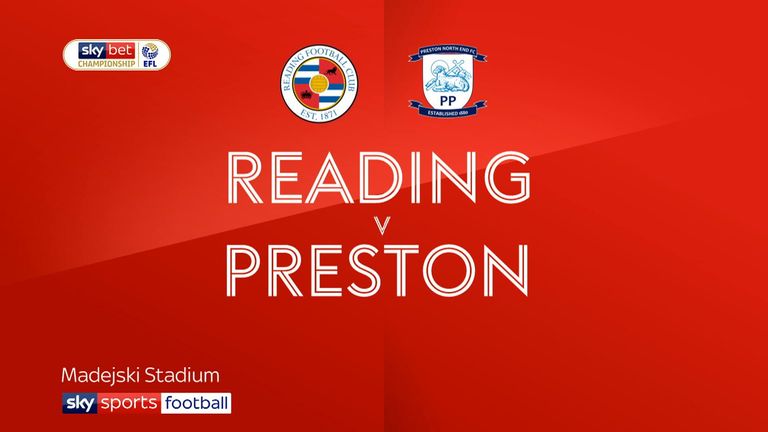 Highlights of the Sky Bet Championship match between Reading and Preston.

Although Preston dominated much of the second period, they found the net only once through Jayden Stockley's late finish.

Preston had been unbeaten in 12 league matches, which included six away victories in a row, and had won their past three games to sit outside the play-off places only on goal difference.

They opened encouragingly, with midfielder Ben Pearson orchestrating many of their moves from his deep-lying position.

Chances were hard to come by but North End had a good opportunity after Callum Robinson had been fouled on the edge of the home area by Lewis Baker.

Captain Paul Gallagher struck the resultant free-kick but it cannoned into the defensive wall. Daniel Johnson then latched onto the rebound but his effort was also blocked.

Meite tried an ambitious shot from 30 yards that flew well wide before Ovie Ejaria was crowded out by the Preston defence.

Andy Rinomhota blazed over and Meite did the same after another quick home break.

Reading were growing in confidence and struck twice in six minutes before the interval.

On the half-hour mark, John Swift released Barrow with a superb pass along the left flank. Barrow crossed low into the Preston box and Meite met the ball at the far post to tuck home his ninth goal of the season.

The Royals then increased their lead when Ben Davies' poor back-pass fell short of 'keeper Declan Rudd. Barrow nipped in to steal the ball before guiding it into the empty net.

Reading almost had a third soon after when Rudd tipped a goalbound Ejaria effort onto a post and away to safety.

Preston manager Alex Neil brought on substitutes Brandon Barker and Stockley at half-time but his new plans were soon disrupted when Barker had to go off injured and was replaced by Louis Moult.

Although Neil's side improved in the second half, they were still struggling to create opportunities and they were left increasingly vulnerable at the back as they pushed forward.

Reading could have made it 3-0 just past the hour when Garath McCleary broke free down the right, but Ejaria completely missed his cross.

Preston rallied towards the end but Stockley's late strike from close range deep into stoppage time proved too little too late.

Jose Gomes: "I'm happy for all the players. They really followed our game plan. We were very solid defensively and we attacked with a lot of danger. In the first half, we could have scored another goal. It was a very good shot from Ovie (Ejaria).

"It was a very important three points for us against a team that didn't lose in their last 12 games. So those results speak for themselves. Preston are a very tough team, very difficult to play against. So we deserved the three points."

Alex Neil: "It was frustrating. In the early part of the game, I didn't think that there was much in it. Both teams passed the ball about a lot, with a lot of probing. But without any real penetration for either team.

"For the first goal, we dived in. Defensively it was poor from us - that very rarely happens. For the second goal, we knew that we had to get it if we were going to get something back from the match. But we didn't, they did. It was a bit of a mix-up or a lack of decision making and the lad (Barrow) nips in to get his goal. We've only really got ourselves to blame for those goals."