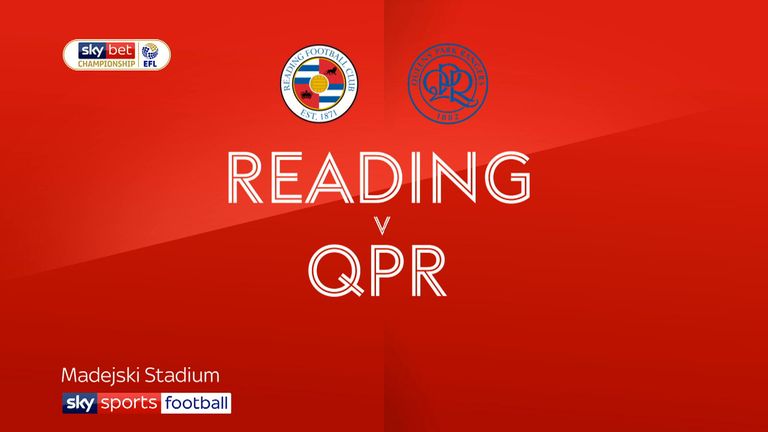 Highlights of the Sky Bet Championship match between Reading and QPR

QPR ended a run of three successive defeats as they gained a deserved 1-0 Sky Bet Championship victory at Reading on Tuesday night.

Rangers dominated much of the match, especially in the first half when Jordan Cousins and Nahki Wells missed presentable opportunities.

Skipper Toni Leistner grabbed the winner, against a poor Reading side who offered too little too late, in the 64th minute.

Rangers had lost their past three matches, including a 2-0 defeat at League One Blackpool in the Carabao Cup third round, and had failed to score in all of them.

They lost 3-0 at Swansea in the Championship on Saturday.

Reading had shown improved form, losing only once in their four previous league outings. They drew 2-2 against Brentford at the weekend, conceding a stoppage-time equaliser at Griffin Park.

Reading suffered a setback before kick-off when striker Jon Dadi Bodvarsson, their six-goal leading scorer, was injured during the warm-up. Yakou Meite replaced the Icelander in the starting XI, with 18-year-old Danny Loader coming in on to the substitutes' bench.

Rangers were quick to take advantage of Reading's initial and inevitable disorganisation through a series of pacy attacks. But the home side survived unscathed and created the first half-chance when Liam Kelly's cross-shot was deflected to safety.

QPR replied almost immediately, with defender Jake Bidwell crossing superbly from near the left byline after a good run.

Cousins rose unmarked, but, with home goalkeeper Sam Walker stranded, he directed over a poor header.

Rangers threatened again when Cousins crossed from the right to the near post. Reading captain Liam Moore slipped when trying block it and the ball struck fellow centre-back Tiago Ilori before ricocheting narrowly behind for a corner.

Saeid Ezatolahi, Kelly and Meite squandered openings for the hosts, but QPR should have gone in front before the interval.

A quick break allowed Eberechi Eze to set up Wells, but Walker, on his 27th birthday, made a fine smothering save to deny him.

Reading began brightly in the second half, with Ezatolahi releasing Meite with an excellent 40-yard pass. But Meite completely lost his composure when faced by QPR keeper Joe Lumley and blazed his effort high over the crossbar.

Rangers were soon back on the offensive and went in front after Walker had produced a stunning near-post save to keep out Cousins.

From Luke Freeman's resulting corner - and after a frantic melee in the home area - Leistner thumped the ball home from close range.

Meite twice went close to an equaliser in the closing stages, but jabbed a shot against a post and then, soon after, nodded just wide. But QPR held on relatively comfortably to end their winless run.

Paul Clement: "I'm not happy with the performance, even if we had nicked a draw at the end. I still would have been disappointed at the way that we played. We started off the season poorly, then we made some improvement.

Steve McClaren: "We were very disappointed at Swansea, it was never a 3-0 game. The players knew that, but you still have to go out and prove it. And they did that tonight. Credit to them. They got together [after the Swansea defeat], we all did. And there were a few home truths told.

"The players sorted it out and they were ready to play at 8pm tonight. I said that the first 10 minutes were going to be huge for us and that was so important. We were so good in those 10 minutes in terms of the aggression that we showed, our courage to play and our control in possession. It's a small step and we've got to take another one on Saturday [at home to Derby]."