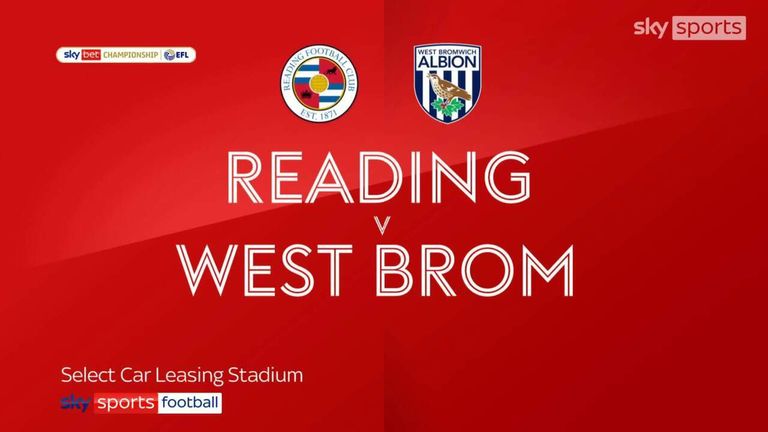 Highlights of the Sky Bet Championship match between Reading and West Brom.

West Brom's disappointing Championship campaign at least moved towards its close on a positive note with a 1-0 victory at lowly Reading.

In a drab first half of few chances, Albion went closest when centre-back Semi Ajayi nodded against a post from close range.

The fare was not much better after the interval but West Brom secured the win in the 78th minute, when leading marksman Karlan Grant pounced after a quick break.

Neither side had anything to play for at the SCL Stadium in their penultimate match of the season.

West Brom's stuttering push for a possible play-off spot ended when they managed only a 0-0 draw at home to Coventry last Saturday. They had won only two of their past seven games.

Reading finally secured second-tier survival despite a 3-0 defeat at Hull - courtesy of the 1-0 home loss of relegation rivals Peterborough against Nottingham Forest.

A decent run of only two defeats in eight outings had proved crucial.

Reading interim manager Paul Ince faced Albion boss Steve Bruce, his former Manchester United team-mate, but neither can have been too impressed with the early exchanges.

West Brom did fashion the best opening, when Conor Townsend found space on the left flank from a Grady Diangana pass.

But Townsend's subsequent cross carried too much weight and the opportunity went begging.

Albion did better when Adam Reach crossed from the same wing.

Central defender Ajayi rose highest in the crowded area but his header clattered against the left-hand upright of home goalkeeper Orjan Nyland.

Grant then tried his luck from 20 yards only to see a poor effort dribble wide.

Little had been seen of Reading going forward until, on the half-hour mark, they went close to breaking the deadlock from a well-directed Junior Hoilett corner.

Home skipper Michael Morrison made a clean connection on it but nodded narrowly past the far post.

Albion made most of the running in the early stages of the second period.

Dara O'Shea played in a clever chipped pass to Grant in the home danger area but the forward's sloppy control cost him any chance of a sight of goal.

Matty Phillips almost deceived Nyland with a curling, deep cross that looked like dropping into the net before the keeper tipped it over the crossbar.

Albion were swiftly back on the attack and finally broke through 12 minutes from time following a quick counter and incisive pass from substitute Callum Robinson.

Grant did well to engineer space for himself before drilling home his 16th goal of the season.

Reading's Paul Ince: "I suppose it was a bit of an end-of-season game. It kind of had that feeling to it. It's never nice when it's your last game at home for the season.

"The fans came along to show their support and, when they do that, you want to try to get a good result for them. When you have two teams who are safe, I think that, subconsciously, it can all pan out that way."

West Brom's Steve Bruce: "I thought we were comfortable in the match. At the start, it was a bit like a testimonial. There was nothing really on the game and it was a nice sunny day.

"In the second half, we were also comfortable and maybe should have put the game to bed earlier. We've had three or four chances after we've gone 1-0 up. But there were a lot of things I was pleased with.