Report and highlights from the Sky Bet Championship clash between Rotherham and Middlesbrough at the New York Stadium as the Millers take the lead through Angus MacDonald, but Matt Crooks sent off before Boro turn it around to win. 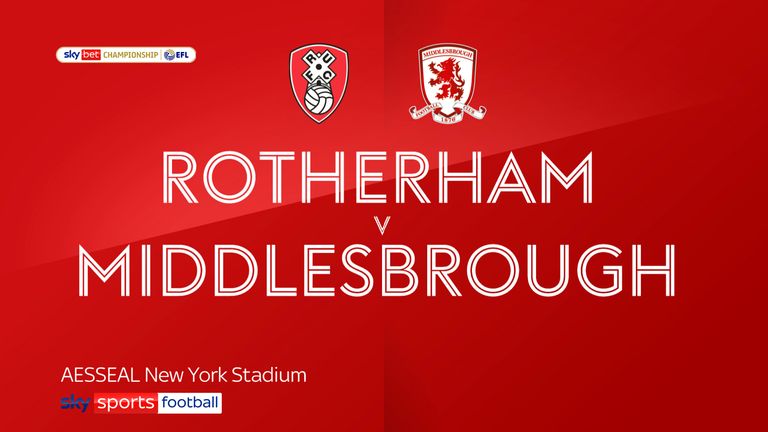 Highlights of the Sky Bet Championship match between Rotherham United and Middlesbrough.

Angus MacDonald had earlier headed the hosts in front but their chances of victory were dealt a significant blow when midfielder Matt Crooks was sent off after 19 minutes.

An equaliser from George Saville then sent the sides in level at the break before former Arsenal forward Akpom struck early in the second half to leave the Millers four points from safety with two games in hand on 21st-placed Derby.

MacDonald opened the scoring in the third minute when he rose unopposed to meet Joe Mattock's right-wing corner from six yards to claim his first goal in four years.

But Middlesbrough's response was spirited and Duncan Watmore was unfortunate not to claim a swift equaliser when he netted, only to be harshly penalised for a foul on Viktor Johansson after MacDonald had attempted to shepherd the ball back to the Millers keeper.

Akpom's downward header then bounced wide following Yannick Bolasie's cross to the far post and he also had a second effort kicked off the line by MacDonald after ghosting past Wes Harding far too easily.

At the other end, Freddie Ladapo's 20-yard attempt was safely gathered by Jordan Archer before Michael Ihiekwe missed the target with a free header from Harding's centre.

Moments later, Crooks was heading for his early shower when he clattered into an aerial challenge close to the halfway line on Grant Hall, who was then substituted after a lengthy period of treatment to a facial injury.

It was Crooks' first dismissal since the 2017-18 season when he was red carded three times.

Boro looked to quickly capitalise on their numerical advantage, with Bolasie firing over from the edge of the box at the end of a powerful surge after Kieran Sadlier had carelessly surrendered possession and the visitors drew level on 33 minutes.

Neeskens Kebano tricked his way past Ben Wiles with a stepover before pulling the ball back from the left byline for Saville to crash a 10-yard strike into Johansson's top-right corner.

Rotherham were then fortunate to reach the interval level after more good work by Kebano teed up a 20-yard chance for Jonny Howson that he thudded against the bar with Bolasie's follow-up header also clipping the top of the home goal.

The visitors did go on to take the lead on 55 minutes when Johansson's weak punch from a high free-kick delivery into the box by Marvin Johnson was returned quickly into the box by Kebano and Akpom finished smartly from 10 yards.

Just past the hour mark, Howson headed against the bar following more clever play by Kebano, but a stretching Ladapo should have hit the target in front of an inviting goal with a volleyed chance, created after Ihiekwe had headed down Harding's free-kick.

Ladapo also hooked a late chance over as the Millers lost at home for the eighth time in nine contests.

Rotherham's Paul Warne: "Crooksy is not a dirty player and I want him to attack the ball. That's how we play. It's a contact sport and I would be amazed if he went to maliciously hurt him. But their bench all went up and made a furore and, while it might have looked like a red from where the referee was, I thought it was harsh and we will certainly appeal it.

Middlesbrough's Neil Warnock: "I was disappointed with the goal we conceded but it didn't affect us. We carried on playing the same way and I thought poor old Jonny Howson was playing the crossbar challenge with the two chances he had.

"Overall, I was happy to get the points but I'm disappointed it was against Rotherham because I want them to stay up. I want the lads to try twice as hard on Saturday for them and for me being a United-ite."