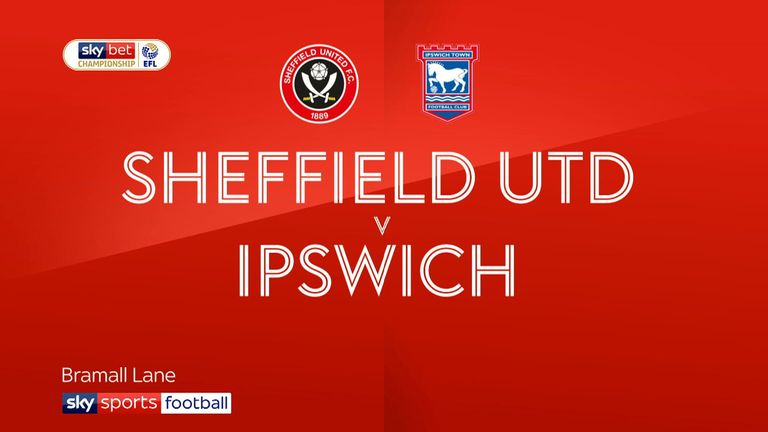 Highlights of the Sky Bet Championship match between Sheffield United and Ipswich.

Sheffield United are on the verge of automatic promotion to the Premier League after they beat Ipswich 2-0 at Bramall Lane.

The gulf in class between the two sides was evident early on, but it took almost half an hour for Scott Hogan to tap home the game's first goal from Jack O'Connell's cross (24).

Chris Wilder's side passed up several chances after the break, but sealed the victory midway through the second half as O'Connell powered a header past Dean Gerken (71).

Man of the match: Jack O’Connell

The victory means the Blades are all-but promoted, though their return to the top flight is not mathematically secure, with closest rivals Leeds, who have an inferior goal difference, in action on Sunday afternoon.

How Blades closed in on PL return

With Leeds' defeat to Brentford on Easter Monday leaving the Blades in charge of their own fate, they started at an electric pace, with the reunited back three of O'Connell, Chris Basham and John Egan exerting their influence from the outset.

David McGoldrick missed an enticing cross from Basham by mere inches inside three minutes, before the defender put in a key block to deny Teddy Bishop at the other end, with Ipswich's first opening of the game.

Therefore, when the deadlock was broken, it was done so in familiar fashion. O'Connell found a pocket of space on the left flank and crossed to the near post, where his former Brentford team-mate Hogan deftly side-footed past Ipswich 'keeper Gerken.

Four minutes after the break, Oliver Norwood crashed a free-kick off the woodwork, before McGoldrick spurned a chance of his own when he nodded the midfielder's cross into the side-netting at the far post.

Just one change was made by Chris Wilder for the visit of Ipswich, as Chris Basham started in defence in place of Martin Cranie. Meanwhile, Billy Sharp was named on the bench.

At this point, it felt as though a second chance might never manifest; John Egan mistimed his jump and powered a header over from another Norwood set-piece, but no sooner had nerves begun to set in, they were extinguished in little more than a minute.

John Fleck took time to consider how to place his corner from the right and the deliberation paid off as O'Connell barged through a crowd to power a header over the line off the underside of the crossbar to the delight for the home fans.

Chris Wilder: "We still have a game to play but we're going to try and win the Championship. That's how our mindset is. Who says we can't? We've taken an unbelievably massive stride today but the game's not done yet. It's got to be an unbelievable swing between now and next Sunday. Hopefully we've done it, which is an incredible feeling for everybody connected with the club.

THIS IS WHAT IT MEANS 🔴 pic.twitter.com/TZISE6VYUr

"I thought they were absolutely outstanding. I thought the way we played and the way we started, we probably should have taken it from one to two a little bit quicker. We possibly should have taken it from two to three but we dominated the game. The clock never shifted. It's just a fabulous experience. We've taken the knocks and we've come roaring back." 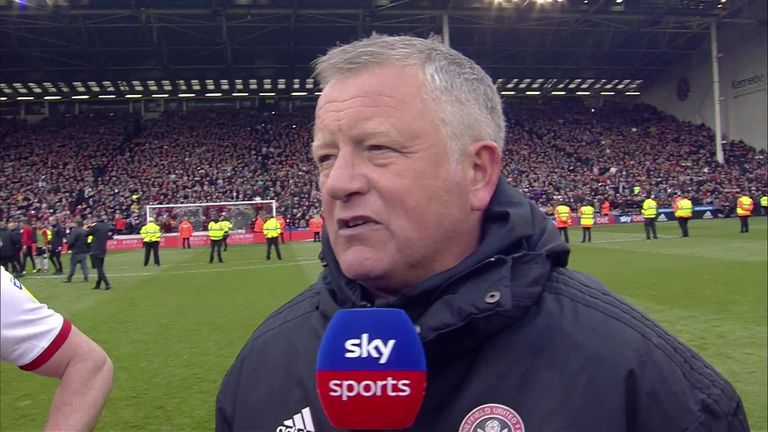 Chris Wilder reflects on a 'huge day' for Sheffield United as they all but secured promotion to the Premier League with victory over Ipswich.

Paul Lambert: "Congratulations to Sheffield United. They're nearly, nearly there. They're a very good side. I think they're the best team we've played. What I did say to the lads is 'remember that atmosphere because we could have that next year'.

"We never capitulated, which was good. All credit to the team, they kept going. I can't fault the players for their effort because we stayed in the game as long as we could. The team kept on battling and they gave it everything.

Sheffield United travel to Stoke for their final fixture of the season on Sunday, May 5, while Ipswich end their 17-season stay in the Sky Bet Championship by hosting Leeds at Elland Road. Both games kick off at 12.30pm.