By Kate Burlaga at Bramall Lane 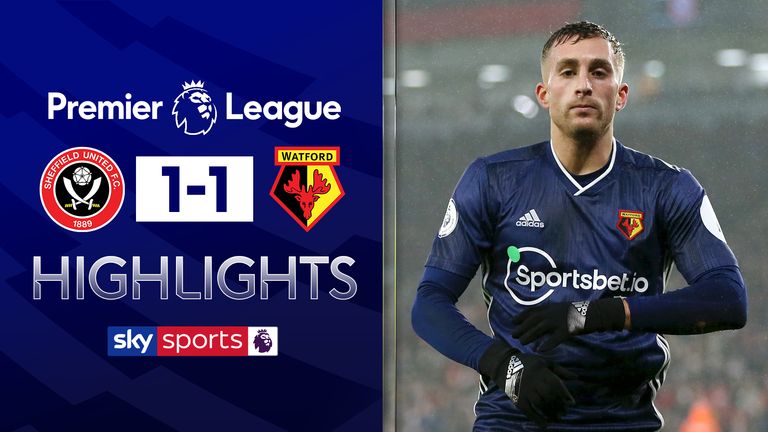 FREE TO WATCH: Highlights from Sheffield United’s draw against Watford in the Premier League.

Ben Foster starred as resurgent Watford thwarted high-flying Sheffield United to earn a 1-1 draw that lifted them off the bottom of the Premier League table.

Gerard Deulofeu had given Nigel Pearson's newly-buoyed side a 27th-minute lead against the run of play, before Oliver Norwood's spot-kick (36) restored deserved parity for the hosts.

Chris Wilder's men, seeking a fourth successive victory, probed for a second-half winner without weaving their slickest patterns but John Fleck was scuppered by a stunning instinctive save from Foster.

Despite slipping below Tottenham into sixth - albeit on goal difference - the Blades move to within three points of beaten fourth-placed side, Chelsea, while the Hornets clamber a point above Norwich but remain six from safety.

How the Blades rallied - but found a winner elusive

Kick-off under rain-laden Bramall Lane skies was delayed by 10 minutes for what both managers later described as a "security issue" and the home side belatedly settled as they sought to keep unlikely pace with the European football-chasers.

Oli McBurnie forced Foster into a first smart low save when he prodded Jack O'Connell's delivery goalwards - and made the Watford goalkeeper work again moments later when he rose to meet a curling ball in from the left.

Fleck soon had the ball in the net, only for VAR to confirm the raised offside flag, but the hosts then found themselves behind when a Foster punt was flicked on by Nathaniel Chalobah and Deulofeu raced between red and white shirts before beating a hesistant Dean Henderson at his near post.

That had been the Hornets' first shot of the contest but the Blades' patient build-up play was rewarded when Will Hughes upended the industrious George Baldock in the box, Norwood firing hard and low inside Foster's right-hand post from the penalty spot.

The second half brought renewed Blades purpose and David McGoldrick, backed by a bellowing Bramall Lane crowd as he desperately sought his first Premier League goal, struck the upright after the restart - only to see a raised flag.

Wilder's side were ascendant if not quite in their final-third groove, though Foster denied Fleck with a brilliant improvised save from close-range shortly after the hour mark, substitute Lys Mousset making a swift impact with a thrilling dart down the right before delivering a ball that seemed destined to ripple the net.

A string of home set-pieces were repelled as a winner proved elusive, the travelling fans staying to serenade their goalkeeper, as well as celebrating another small step towards a once-unthinkable escape.

Man of the match - Ben Foster

Foster proved the difference at Bramall Lane, where, on another day, Wilder's side could well have been comfortable. His first-half work was smart, his second-half contribution spectacular. Wilder felt Fleck should have done better but the Scot could hardly have expected to see his first-time effort ricochet off the back of the goalkeeper's scrambling frame.

"There were a couple of good saves and one unbelievable one," Pearson said after the contest. "He's an experienced goalkeeper who has fire in his belly to perform. I can look him in the eyes and know he'll do what he can to deliver."

What he delivered was a contender for save of the season - and a potentially priceless point.

Sheffield United's Chris Wilder: "I thought it was a fair result. There was always going to be an upturn when Nigel went in. We weren't at our best. We were better second half but we didn't quite find that last little bit. It's disappointing that we haven't got the win we wanted on Boxing Day but I don't think we did enough as a home team. We set the game to take it to the next level but we never built up momentum. It was huff and puff."

Watford's Nigel Pearson: "For all their pressure and possession, I think we still kept them at arm's length. I wouldn't suggest we were on top of the game but we made it difficult for them to find that winner. We showed traits of resilience. They play a fabulous brand of football but we tried to exploit what we thought was their weakness, the swift counter-attack."

Watford host Aston Villa in a 3pm kick-off on December 28, while Sheffield United travel to the Etihad to face Manchester City a day later, with kick-off at 6pm.