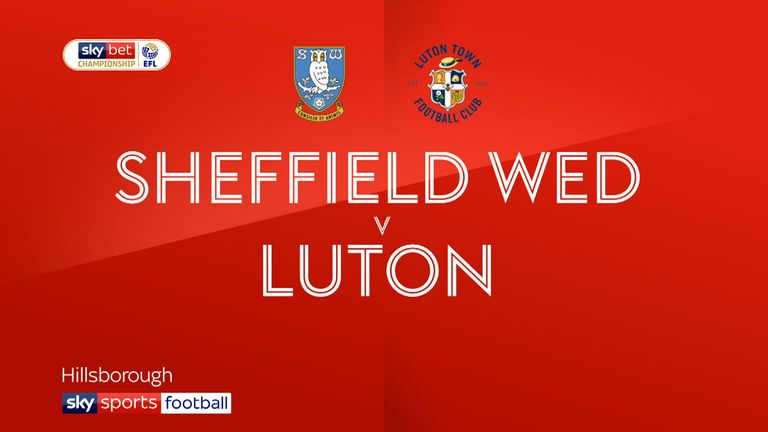 Highlights of the Sky Bet Championship match between Sheffield Wednesday and Luton Town.

Sheffield Wednesday went top of the Championship with a narrow 1-0 home victory against Luton thanks to Kadeem Harris' second-half goal.

The defeat means newly-promoted Luton are still yet to win a match back in the Championship.

Both sides went into the game on the back of defeats, making three changes apiece to their starting line-ups.

Wednesday welcomed Barry Bannan back into their XI following his calf injury, alongside Moses Odubajo and Morgan Fox.

The visitors had the first opportunity of the game when LuaLua's low cross found Ryan Tunnicliffe in the box but his shot was fired wide.

LuaLua looked lively and threatened again when his long-range effort troubled Keiren Westwood who awkwardly palmed the shot away.

Harris then struck a fierce shot of his own, collecting the ball on the right and darting inside before arrowing a curling effort to the far post which Simon Sluga acrobatically saved.

Westwood nearly gifted Luton the opener by not dealing with a back-pass, his eventual clearance went only as far as Shinnie who cracked a half-volley goalbound but the keeper recovered brilliantly to tip the ball over.

In the first half, the two sides nullified each other well. They both brandished a similar variation of 4-3-3 and struggled to create clear opportunities, but Luton had come to Hillsborough to play and looked the better of the two sides at the break.

The breakthrough came in the 54th minute and arose from a sloppy Sluga throw from Luton's goal.

His attempt to quickly start an attack backfired and ricocheted into the path of Jacob Murphy, whose clipped ball to the far post was nodded down by Steven Fletcher for Harris to prod home from close range.

Wednesday thought they had doubled their lead when Julian Borner jumped highest to direct a header across the face of goal for Fletcher, but the flag was up for offside before the Scotsman could tap in.

Another Murphy cross found its way to Fletcher who went close once again with a powerful header which brushed the top of the crossbar.

Luton were struggling to penetrate the Wednesday back line but as they pushed numbers forward they were leaving gaps at the back.

Harris looked to exploit that when he raced through on goal before finding Murphy in the box but his misguided header went over the bar.

Substitute Massimo Luongo went close to stretching the Owls' lead in stoppage time, working space for himself before releasing a strike which went narrowly wide.

Sheffield Wednesday interim boss Lee Bullen: "That could possibly go down as one of the most important three points we've got all season. I thought first half we were in and out of the game, never really got a rhythm to our play.

"Luton played well, caused us problems - especially in the midfield area they had good rotation. We seemed to always be a yard off. We had one or two good spells in the first half but not what we really wanted. At half-time we tweaked our midfield formation and it paid dividends."

Graeme Jones: "I feel like we deserved something from the game, but we can't keep repeating that story. All I will say from a progress (perspective) is that we are getting closer to winning a game of football.

"We will get there. If playing in the Championship was easy everyone would be doing it. We are there technically, tactically and physically. We need to believe we can win. The stats were all in our favour, but it's got to go in the back of the net."