Report and highlights from the Sky Bet Championship clash at Hillsborough 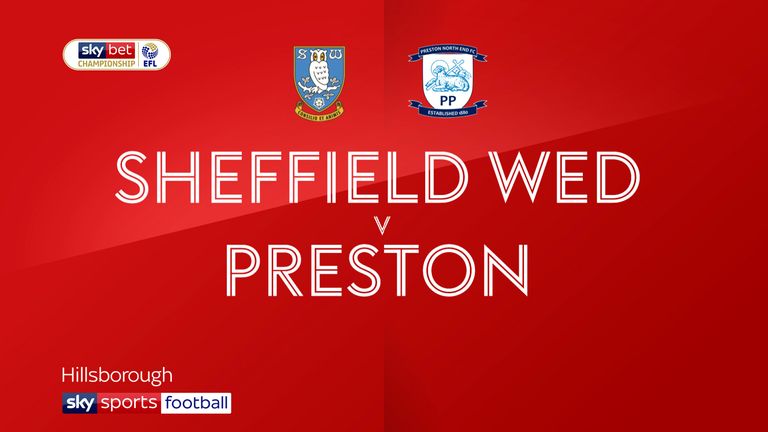 Highlights of the Sky Bet Championship match between Sheffield Wednesday and Preston.

Wednesday broke the deadlock early in the second half through Jacob Murphy's fine effort, but Preston hit back to turn the game on its head with goals from substitutes Scott Sinclair, Jayden Stockley and Brad Potts.

The victory halted a seven-game winless run for Alex Neil's side, who have climbed up to eighth place, three points adrift of the top six.

Wednesday slipped to a third straight league defeat, but the scoreline was harsh on Garry Monk's side, who hit the crossbar through Dominic Iorfa in the first half.

Neil made his intentions clear, switching to just three at the back in a bold bid to end his side's poor run and it helped make for a lively opening.

Patrick Bauer's downward header was held by Wednesday goalkeeper Joe Wildsmith and at the other end Iorfa headed Barry Bannan's corner against the crossbar.

Tom Barkhuizen was next to make a hash of a clear scoring chance for Preston as he shot wide after sprinting through on goal at the end of a swift counter.

The Owls had spells of concerted pressure as half-time approached and striker Alessio Da Cruz was thwarted by Jordan Storey's excellent block after Bannan's clever ball over the top.

Wednesday continued to dominate possession at the start of the second half and broke the deadlock with a moment of genuine quality in the 58th minute.

Murphy cut in from the right and after evading several challenges, played a one-two on the edge of the area with Atdhe Nuhiu before steering the return pass beneath Preston goalkeeper Declan Rudd.

Wednesday's goalscorer limped off injured soon after and was replaced by Moses Odubajo.

Neil responded by sending on Daniel Johnson and Potts for Ben Pearson and Ryan Ledson and soon after Sinclair and Stockley replaced Hughes and Maguire.

In a dramatic finish, Wednesday defender Julian Borner thought he had headed his side back in front in the 86th minute, but the linesman flagged for offside and a minute later Preston forged ahead.

Stockley fired home an excellent low finish into the bottom corner from outside the penalty area.

Wednesday went close to a late leveller when midfielder Joey Pelupessy headed inches wide, but Potts settled it for Preston with a thumping finish in time added on.

Sheffield Wednesday's Garry Monk: "I didn't see a big interference for it (the disallowed goal). It was a bitter blow. It would have put us in a good moment to win. But it's about being able to focus in the big moments. It is game management. We lack concentration in those moments."

"There is a lot of work to do here, but I'm determined to get it right."

Preston's Alex Neil: "It looked like it was going to be another frustrating night. First half we were fantastic, we could have been 4-0, 5-0 up, we had plenty of opportunities. On another night we could have been 4-0 up at half-time and in the second half we didn't get up to tempo quick enough before their goal changed the game.

"We probably got that bit of luck, albeit that was a free-kick on Declan for their second (disallowed) goal. But we got that one and that's swung the game in our favour and then the second two finishes were fantastic to finish the game off."