Report and highlights from the Sky Bet Championship clash between Sheffield Wednesday and Wycombe at Hillsborough as the Owls climbed out of the bottom three thanks to goals from Jordan Rhodes and Adam Reach. 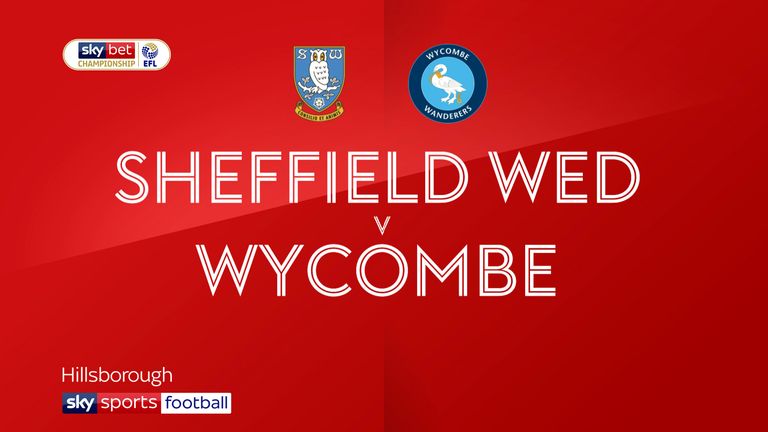 Sheffield Wednesday climbed out of the Sky Bet Championship relegation zone thanks to a 2-0 victory over Wycombe at Hillsborough.

Neil Thompson made four changes to the Wednesday team that lost to Millwall at the weekend.

Wycombe manager Gareth Ainsworth made six changes to the side who lost to Nottingham Forest on Saturday, with Anis Mehmeti, Scott Kashket, Adebayo Akinfenwa, Jason McCarthy, Curtis Thompson and Anthony Stewart all coming in.

McCarthy had the first chance of the game, a right-footed shot from outside the penalty area which was blocked in the fifth minute.

In an open start to the match, the hosts came close to taking an early lead.

Reach found Callum Paterson with a measured pass from the left flank and Ryan Allsop kept out the Scotland international's first-time effort in the 18th minute.

The Owls continued to apply pressure in the final third and they got their reward as Rhodes headed Wednesday in front in the 34th minute.

Wycombe's Ryan Tafazolli had twice denied Thompson's side a minute earlier, but a pinpoint Harris cross was enough to find Rhodes, who directed the ball past Allsop.

The Chairboys pushed for an immediate equaliser in the 39th minute. Nnamdi Ofoborh picked out Akinfenwa, but his header was comfortably saved by home keeper Keiren Westwood.

Ofoborh concluded the first half with a freekick hit wide in the 45th minute.

Barry Bannan had the first attempt on goal of the second half, driving his way into the six-yard box and forcing Allsop into a 60th-minute stop.

Mehmeti then tried his luck, blasting wide from a tight angle, before Akinfenwa gave way for Uche Ikpeazu.

Shaw attempted to double Wednesday's lead as he met a Bannan cross but could only head over.

Reach scored a second for Wednesday in the 76th minute. An initial Harris shot was blocked by the Wycombe defence, but with the help of a substantial deflection, the winger powerfully struck past a helpless Allsop to put the game to bed.

Stewart tried to pull one back for Wycombe in the 79th minute but the defender was denied by Westwood, who ultimately kept a clean sheet.

Sheffield Wednesday caretaker Neil Thompson: "It's still tight at the bottom. We know we've got to win football matches. We've won six from our last nine and we're going to try and keep doing that. In the first half we did well tonight. We got the ball out wide and got the ball in the box. The second half was a bit of a scrap, but the boys remained very professional.

"Everyone wore their hearts on their sleeves today. We showed great character against a team at the bottom fighting for their lives. It's not a given you're going to win the game. You have to work hard and do the right thing. We know we haven't won as many away from home. We've turned results around at home and we'll treat every game on its merits."

Wycombe's Gareth Ainsworth: "Mistakes always cost you and we made a couple or errors, for the second goal especially, and we'll be putting that right behind closed doors. The boys gave me everything again. We sorted the way we wanted to defend against them at half-time and we were much better in the second half.

"One goal and you're always in it. The second one was a killer. It allowed Sheffield Wednesday to slow the game down and do what they wanted. We were chasing the game from that moment. I'm proud of the boys. They're a good bunch and it could only be a good thing, the young boys getting minutes in the Championship.

"We go game by game. I want to enjoy our time in the Championship, be aggressive and go for it. I want to attack teams. There are a lot of positives from today, but we got beat and I don't like getting used to it."