Report and highlights from the Sky Bet Championship clash between Sheffield United and Stoke City at Bramall Lane as late goals from Lys Mousset and David McGoldrick saw the Blades secure a comeback win. 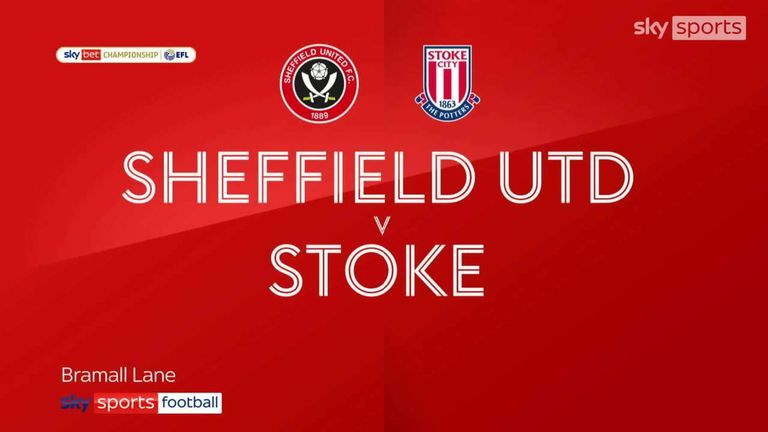 Highlights of the Sky Bet Championship match between Sheffield United and Stoke City.

Jacob Brown gave Stoke the lead early into the second half before the subs turned the game around, with Mousset equalising and McGoldrick finding the winner.

Following their 2-1 defeat against Bournemouth, Slavisa Jokanovic made one change to the Sheffield United line-up, with Jayden Bogle replacing the injured George Baldock.

Michael O'Neill made one change to the Stoke side that won 1-0 against West Brom, with Romaine Sawyers coming in for Jordan Thompson.

The Blades made a lively start to the game with Ben Osborn posing a threat down the left flank. He found Morgan Gibbs-White, whose headed effort went wide of goal.

United continued to cause trouble down the left-hand side. Oliver Norwood floated a cross into the danger area which John Egan couldn't make a headed connection with.

The Potters went close as Mario Vrancic's corner found Brown at the back post, and his powerful headed effort was cleared off the line by Billy Sharp.

Josh Tymon's low cross from the left found its way to Tommy Smith in space on the right side of the box, and his driven shot was kept out by Robin Olsen.

Sharp picked out Gibbs-White and his close-range headed effort went wide, while Vrancic's shot from the left side of the box went narrowly wide of the right post.

Sharp latched onto an aerial ball played over the top of the defence by Osborn, and his headed effort forced Adam Davies to make a diving save.

The first chance of the second half fell to the Blades, Enda Stevens' driving effort from the left side of the box skimming past the right post.

Stoke opened the scoring in the 55th minute. Brown turned well on the edge of the box and fired a right-footed strike into the bottom corner. His excessive celebration earned him a yellow card.

A corner whipped in by substitute Sam Clucas found Sawyers unmarked near the front post, and his header went over the bar.

United equalised in the 80th minute thanks to the two substitutes linking up. McGoldrick squared the ball to Mousset, who slotted his shot past Davies.

The Blades got the winner in the 83rd minute. Stevens played in McGoldrick, who calmly shot into the bottom right corner.

Sheffield United's Slavisa Jokanovic: "We were really pleased with the game. For 85% of the game we played really well, we moved the ball well and tried to find spaces. For us this is a massive win. With energy and trust we can play well. We are looking for progress. We need to carry on working to get more good performances in the future. We don't trust ourselves enough at times, I hope this will give them confidence because these are a good team in the Championship.

"This is the Championship, if you are not concentrated and ready, then you can pay the expenses, which we have already found out this season. The substitutes participated very well in this victory. It's important how we start a game but it's more important how we finish." David McGoldrick is intelligent. He was one of the most important players for us last season and he's a guy that can change a game."

Stoke's Michael O'Neill: ''They are a good opposition, they made it difficult for us. At half time we asked for a reaction and got that. We were excellent for the first 30 minutes, we were 1-0 up and in control of the game. I just felt we had control of the game, our play was a lot better, we scored a good goal and we looked like we were going to score another goal.

"The lesson for us is that if we don't score that second goal, then the opposition are still in the game, that was the key. Then the game turned on its head with the substitutions the opposition made. We've got to do better to stop the cross, especially the second one. It's a tough one to take, we have to accept it and move on to Tuesday now."