Southampton 4-1 Brentford: Ralph Hasenhuttl's side up to 11th in Premier League

Match report and free highlights as Southampton ease past Brentford at St Mary's; Saints hit four goals in a league game for the first time this season; victory comes in front of new owners Sport Republic; "They saw a good game today and a deserved three points," said Ralf Hasenhuttl 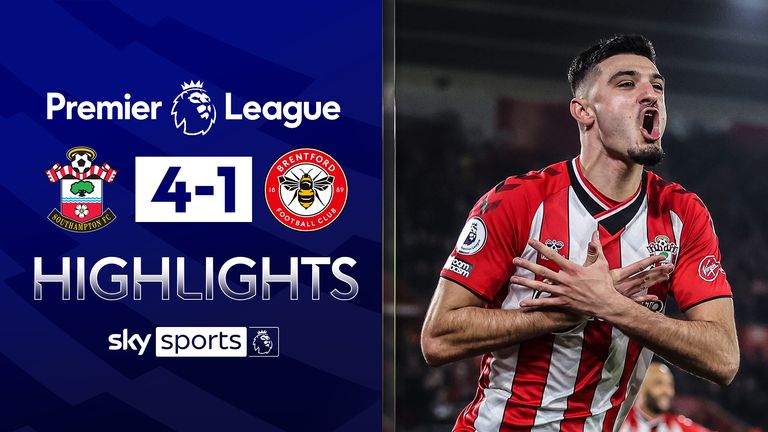 FREE TO WATCH: Highlights from Southampton's 4-1 win against Brentford in the Premier League

Southampton - in front of new owner Dragan Solak - hit four goals in a Premier League game for the first time this season as they thrashed Brentford 4-1 at St Mary's.

In a game that was originally postponed because of a Covid-19 outbreak in the Brentford squad, Southampton wasted no time, going ahead inside five minutes as Jan Bednarek found space at the near post to glance James Ward-Prowse's corner into the far corner from close range.

Only Norwich (15) have conceded the first goal in more Premier League games this term than Brentford (13), who have done so in 12 of their last 13 matches.

Brentford struggled to get going as Southampton continued to pin them back, but Thomas Frank's side did find an equaliser in the 23rd minute courtesy of their first attempt on goal in the match. Bryan Mbeumo did brilliantly to dig out a cross and it was met with a fine volley from Vitaly Janelt to beat Fraser Forster.

In an action-packed first half, Saints restored their advantage eight minutes before half-time following an unfortunate own goal from Bees goalkeeper Alvaro Fernandez. Ibrahima Diallo's low shot rebounded off the upright before hitting the Brentford goalkeeper's hand and nestling in the back of the net.

After the break, there was no stopping the hosts as Armando Broja stretched Southampton's lead with a breakaway goal just four minutes into the second half. The Chelsea loanee raced clear from halfway following Oriol Romeu's exquisite through ball before calmly beating Fernandez.

The hosts were now enjoying themselves as the club's new owner watched on, and they put the finishing touch on performance which was described by Saints boss Ralph Hasenhuttl as 'one of the best performances at home' when substitute Che Adams lifted the ball beyond Fernandez.

Victory sees Hasenhuttl's side, who are now unbeaten in four league matches, move above Brentford and into 11th in the Premier League table. Meanwhile, it was a poor night for Frank and his side as the heavy defeat sees them move down to 13th.

'Saints put on a show for new owner'

"They put on a show for the new owner. They didn't hold back at all. Everything they did was on the front foot. Considering the great start to the season, Brentford were miles off it.

"Southampton were exploiting the lack of pace in the Brentford defence. Thomas Frank will just want to put it down to a one off."

Saints alive! Hasenhuttl's side impress in front of new owners...

"Dragan Solak was all smiles, and why not, as he witnessed his new team emphatically sweep aside Brentford.

"In what was the first game at St Mary's since it was confirmed that Sport Republic had bought an 80 per cent stake of the club, Southampton put on a show for the new owner as the goals flowed freely for Hassenhutl's side.

"Brentford had no answer for Saints' free-flowing attack, which was admirably led by the impressive Armando Broja, who grabbed his side's third.

"After a showing like that, the new Southampton owner will be wondering if it is like this every week at St Mary's, but maybe he shouldn't get too excited. The next visitors to St Mary's... Manchester City!

"In contrast, there were Brentford fans heading for the exits early. They'd seen enough and you can't blame them. It was a poor showing from Frank's side, especially when they had the carrot of a win seeing them move back into the top half of the table.

"The defeat is Brentford's heaviest top-flight defeat since May 1947, when they lost 0-3 at home to Blackburn.

"Now, Brentford, who are still 12 points ahead of the relegation places, face a difficult run of fixtures coming up with Liverpool, Manchester United and Manchester City their opponents in three of their next four league games.

"And Frank will be hoping his side can bounce back quickly and avoid getting dragged into a relegation scrap as we move into the business end of the season."

Hasenhuttl: Performance one of our best at home 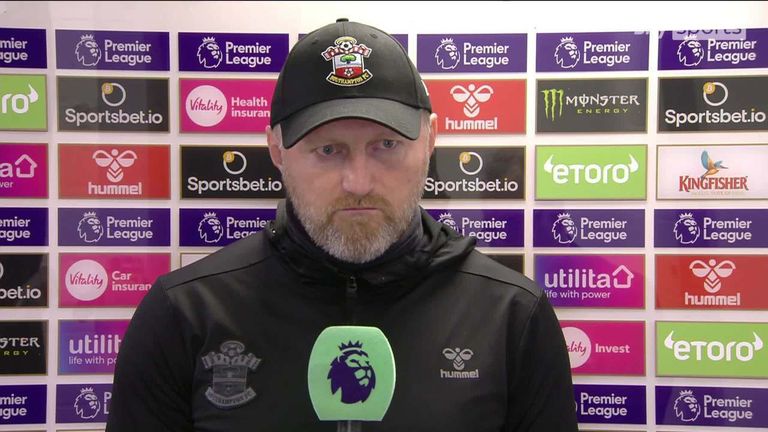 Southampton boss Hasenhuttl was delighted his side could put on a show for new owner Solak, describing his team's performance as one of the best he's seen at St Mary's.

The German was particularly impressed with the intensity of his players, especially after playing 120 minutes on the weekend in the FA Cup.

"They [the owners] saw a good game today and a deserved three points," he said.

"We had 120 minutes on Saturday so to see our energy today from the beginning was impressive. Scoring four goals for the first time since 2017, it's not very often that injury-time plays out and we feel comfortable because sometimes it's tight here. Today we had a fantastic performance.

"Our attitude today was don't give up, go for every ball. You could see there is a reason Brentford are having a good season and we knew we had to keep them away from our goal, they are dangerous on set pieces and around the box. We had quick strikers up front and it was a very controlled and disciplined performance today.

"It was an important result for us. Unbeaten in five games now and even longer at home. We spoke about getting a second and third goal and being able to play calmer football so that was fantastic to watch. Today was one of the best performances at home." 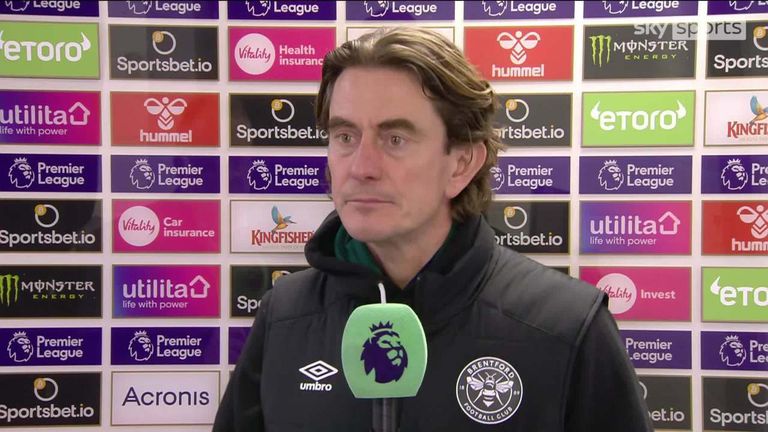 Brentford boss Thomas Frank was left disappointed after his side's heavy defeat on the south coast, saying he felt his players did not give 100 per cent at St Mary's.

"Fair play to Southampton but my job is to look at my team's performance. If we are not playing every second of every Premier League match 100%, then we are not getting anything out of it.

"We needed to do better at 2-1. We can't give three of the goals away, especially the last two.

"We tried to change it offensively [when Wissa came on]. We were slightly better but it didn't help.

"That is why it hits so hard. The big thing we want to be good at is defending well and we have done it well this season but didn't today."

Broja is fast becoming a fan favourite at Southampton after another impressive display.

He capped off his and Southampton's night with the third goal, which is his fifth league goal of the season.

When asked about the goal after the game, he said: "It was a great ball from Oriol Romeu, I knew the defence were quite open there so I didn't think they would catch me from there. It was a good goal so I'm happy.

"When it's 2-1 they are driving forward, and they could always get a lucky goal which changes the perspective of the game so when you get a third goal you can keep going.

"It's an honour to be playing in the Premier League for such a good club and be around a club like this and players like this so I'm thankful to be around the team. I am trying my best to help the team and score goals, that's all I can do."

And when asked about how the Saints fans have taken to him, he added: "It's amazing, there's no better feeling than having the fans behind you, it's amazing, touches the heart and to have that response I am really thankful for them."

"He's a great threat. He didn't have many poor games this season so today he showed again how dangerous he can be for the opponent and he's very helpful for our game."

Southampton travel to face Wolves at Molineux in the Premier League on Saturday; kick-off 3pm. Brentford visit Liverpool at Anfield on Sunday at 2pm.