Report and highlights from the Sky Bet Championship clash between Stoke City and Blackburn Rovers at the bet365 Stadium as Reda Khadra's goal steered Tony Mowbray's side to victory and lifted them to fourth in the table. 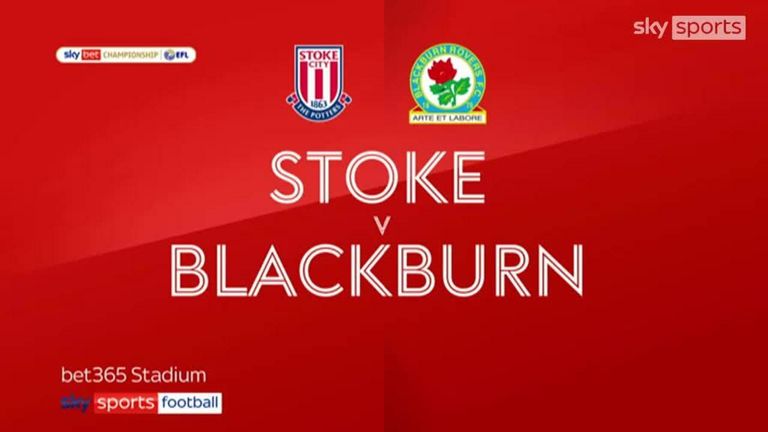 Highlights of the Sky Bet Championship game between Stoke and Blackburn.

Blackburn leapfrogged Stoke in the Sky Bet Championship with a 1-0 win at the bet365 Stadium.

Reda Khadra scored the winner early in the second half and Rovers never looked like allowing Stoke back into the game.

It was a good run from the Brighton loanee, who struck a beautifully-hit ball into the bottom left corner past Adam Davies from just inside the box.

The goal did, however, come with a hint of controversy as Stoke were denied a corner before Rovers took the ball up the field to score.

Romaine Sawyers' effort was turned around the post by Thomas Kaminski and Stoke's Mario Vrancic had another long-distance effort from outside the box.

It took a wild deflection which somehow went unnoticed and the referee gave a goal kick, from which Rovers went up the other end to take the lead.

Stoke nearly stole a point in added time through Danny Batth as he flicked a shot goalwards but it was brilliantly saved by Kaminski to hold on to the three points.

Rovers nearly doubled their lead through Darragh Lenihan. Joe Rothwell whipped in a free-kick from the right to the back post and Lenihan's volley flashed in front of Davies' eyes as it went wide of the post.

Stoke held the majority of possession in the opening 45 minutes but looked toothless going forward. That all changed in the second half, with the Potters' creativity just beginning to show when Rovers took the lead.

After 12 minutes, Scott Wharton caught the Potters' high back-line sleeping with a long ball over the top which found Ben Brereton Diaz. The Chile international picked the ball up on the left wing and audaciously tried to chip Davies but his effort went just wide of the post.

Moments before half-time, Rovers should have gone into the break a goal ahead. Harry Pickering found space down the left flank and drilled in a wonderful cross across the face of goal but nobody gambled and it trickled out for a throw-in.

It is now back-to-back defeats for Michael O'Neill's side, who drop out of the play-off spots after an incredibly bright start to the season, while Rovers have now gone four games without defeat and climb to fourth in the table.

Stoke's Michael O'Neill: "I think we played quite well in the first half in difficult conditions. We tried to build the game and it was difficult for the players. Ultimately, the game was decided by one moment and it was always going to be that kind of game I felt. And unfortunately, Blackburn had that moment. If you look at the goal really, Mario puts in a strike that's on target and it takes two deflections and the referee, in his wisdom, decides to award a goal-kick.

"The ball was kicked forward, we have to defend that and I think Romaine picks it up and plays it to Ben (Wilmot) and his clearance was closed down and the next thing is the ball is in your net. It was a good finish from the lad (Khadra) but ultimately we should have been asking Blackburn to defend a corner as opposed to us having to defend a goal-kick and that's what leads to the goal. It's disappointing from that aspect and it's a poor decision from the referee. One of many."

Blackburn's Tony Mowbray: "At half-time, I was unhappy with where we put the ball. We were playing with the wind in the second half and what we said was to shoot with the wind. If you get a yard, whack it and shoot low. Reda is a great kid and I feel as though he's still learning about the mentality to play for this team and yet he still has amazing attributes that we have to give him the opportunity to play.

"With that pace, the rocket of a right-foot - he did a job for us today and we're delighted he did. With total respect to Romaine Sawyers and Mario Vrancic, they're wonderful footballers but they're not as mobile as Joe Rothwell and we needed him out there today. He showed moments where he can run away from people. In the Championship it's very hard to win games and I've talked long and hard about the mentality of this group of players and how wonderful they are. It's good to see a lot of young lads in the dressing room happy and bouncing tonight and proud of each other."