Goals from Peter Etebo and Benik Afobe earn victory for Nathan Jones' side. 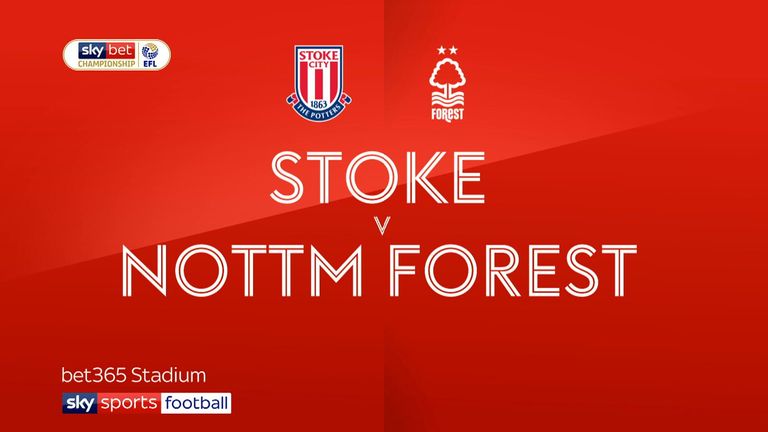 Peter Etebo and Benik Afobe fired Stoke to a 2-0 victory over play-off chasing Nottingham Forest and end a six-match winless run in the Sky Bet Championship.

Midfielder Etebo opened the scoring after 15 minutes at the bet365 Stadium when he guided in a low shot following a well-worked counter-attack.

The goal, which was the 23-year-old's first for Stoke since his arrival from Las Palmas last summer, was added to by Afobe's fine 74th-minute finish, wrapping up a professional performance from Nathan Jones' men on a crisp afternoon in Staffordshire.

Stoke started brightly and created their first chance inside three minutes. Joe Allen weaved into the box to find Tom Ince, but the former Forest loanee saw his low strike tipped around the post by visiting goalkeeper Costel Pantilimon.

At the other end, Jack Butland had to spread himself well to thwart Ryan Yates' hooked effort from close range after the hosts failed to clear a cross.

The Potters were soon in front, though, when Etebo ran on to Ince's pass from the right, driving into space before thumping a right-footed shot from the edge of the penalty area into the bottom right-corner of Pantilimon's net.

Not disheartened by going a goal behind, Forest duo Ben Osborn and Joe Lolley both had strikes from distance charged down by a resilient Stoke defence.

When play resumed for the second half, Martin O'Neill's Forest pushed for the equaliser and Jack Robinson's long-range shot was well watched and saved by Butland down to his left.

Minutes later, Butland was forced in to action again, pushing away Joao Carvalho's powerful attempt from the left side of the box after a neat cutback from the left by Jack Colback.

Osborn would be the next Forest player to try his luck, sending an effort from 20 yards through a sea of players and just wide of Butland's left-hand post.

Stoke made the three points safe 16 minutes from time when Ince fed forward Afobe, who raced onto the pass to fire home a low shot from the edge of the penalty area.

Having set up two, Ince was looking to get on the goalscoring act himself but saw his low rasping drive across goal pushed behind by Pantilimon.

Forest substitute Adlene Guedioura headed Osborn's corner from the left narrowly wide late on, as Stoke saw out the final few minutes to claim their first league win since mid-January.

Nathan Jones: "I thought that was probably our most complete performance in terms of starting a game, the football we played at times, and I thought we had more cutting edge today. I thought we were more of a threat, defensively we were very strong and really did limit them today, and once we got the second goal, we could have got a third or a fourth.

Martin O'Neill: "Stoke proved equally as tough as I thought. They have some very, very decent players playing, some with wide experience and so in terms of themselves.

"They played strongly, and I thought they would play exactly as they did so it was no surprise to me how strong they, physically, but I was hoping that we would be ready for it after our result on Monday evening, but no, we were beaten today."