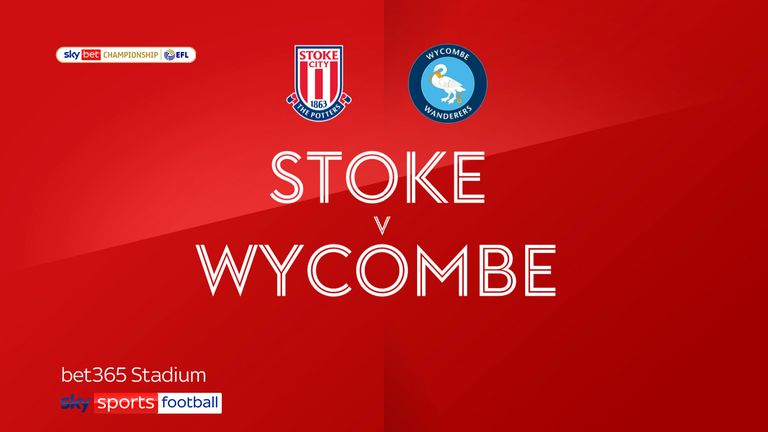 Stoke scored two goals inside five minutes to end a three-game losing streak with a 2-0 win at home to Wycombe.

Rhys Norrington-Davies opened the scoring midway through the second half before Harry Souttar wrapped up victory after heading home a corner.

But the Potters were made to work hard by the basement boys with Steven Fletcher and Nick Powell seeing chances go begging during a dominant opening half-hour.

Wanderers failed to make the most of a good spell either side of half-time with Josh Knight and Admiral Muskwe both coming close to an opener.

They paid the price for not taking their chances and never looked like getting back into it after falling behind.

Fletcher scuffed a shot at David Stockdale inside the first 30 seconds as Stoke came out of the traps fast.

Powell headed against the crossbar in the fifth minute after getting on the end of Tommy Smith's cross.

Fletcher drilled a low shot straight at Stockdale after the ball dropped favourably after 10 minutes.

The Stoke striker made a mess of an attempted header over the 'keeper after Joe Allen played him in four minutes later.

Norrington-Davies saw a curling effort deflected wide for a 14th-minute corner as Stoke kept up the early pressure.

Jacob Brown was inches away from tapping in Powell's pass across the six-yard box after 38 minutes.

Wycombe had a penalty shout waved away after Muskwe went down easily under a challenge by Norrington-Davies three minutes before the break.

Knight headed wide from a stoppage-time corner before Muskwe had a long-range shot deflected narrowly wide.

Brown blazed a cross-shot over in the 49th minute before Allen failed to find the target with a free header.

Allen missed an open goal from a couple of yards out after 57 minutes after he misjudged the ball and made contact with his standing leg.

Angus Gunn beat away a powerful shot by Muskwe seconds later as the game opened up.

David Wheeler had a shot blocked for a corner after a good first touch and turn created the opportunity.

However, Norrington-Davies calmly slotted through Stockdale's legs after a brilliant one-two with Fletcher opened up Wycombe in the 64th minute.

Wycombe had shouts for a penalty turned down after Anis Mehmeti went down with eight minutes to go, while Adebayo Akinfenwa headed wide from Mehmeti's cross late on.

Stoke's Michael O'Neill: "We deserved to win the game, there is no doubt about it. We were wasteful in the first 20 mins of the game and should have scored two or three during that period of play. We got dragged into a battle in the first half which we were trying to avoid. Wycombe had two time-outs in the first half based on the goalkeeper supposedly being injured, which the referee allowed.

"That is their strategy. They want the game to be stop start and to frustrate the opposition and that is something they do well. We played well in the second half and it's disappointing we didn't win by more. We had got into some good areas and some of our play was good. We were just wasteful in terms of the end product. We have gone through a mixed spell over the last six games and it was important to win the game."