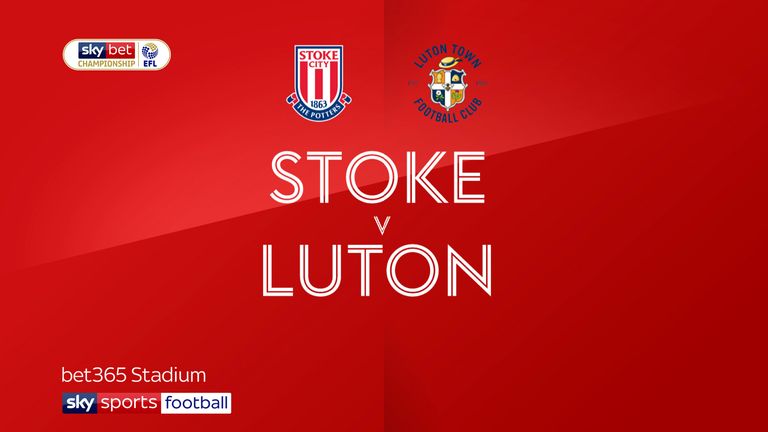 Highlights of the Sky Bet Championship clash between Stoke City and Luton Town.

Midfielder Allen scored either side of half-time and winger James McClean was also on target as the relegation-threatened Potters ended a miserable run of three straight defeats with a comfortable home win.

It was the first time the club had scored three goals at home since December 2017.

Republic of Ireland international McClean fired the hosts ahead with a clinical 35th-minute strike and then picked out Allen to score with a glancing header in first-half injury-time.

And the night got even better for the Welshman when he slotted into the bottom right corner five minutes after the restart with a smart finish.

It was the first time the 29-year-old had scored two goals in a league game in just over three years. The last time being a double in a 2-0 win against Sunderland back in the Premier League.

Victory for Stoke was also their first home league win against Luton since August 2005.

Stoke boss Michael O'Neill made three changes to his side as they looked to bounce back from their miserable losing run.

Ryan Woods and Danny Batth dropped to the substitute's bench, but Bruno Martins Indi did not even make the matchday squad despite having started in Saturday's 2-1 away defeat to Hull.

Luton manager Graeme Jones made one forced change to his starting side with the injured Dan Potts replaced by captain Alan Sheehan.

The Hatters impressed with a battling 2-1 home win over Wigan at the weekend - and they started full of confidence against the Potters.

But it was Stoke who came within a whisker of scoring through Shawcross after only eight minutes.

The former England centre-back hit the underside of the crossbar from Sam Clucas' dangerous inswinging corner that had the visitors all at sea.

However, Shawcross' first game of the season ended with further frustration after he hobbled off with a leg injury after only a quarter of an hour played.

Winger Tom Ince picked out Clucas with an inch-perfect pass, but the midfielder rifled wide with a sweet left-foot volley.

Midfielder Ryan Tunnicliffe had Luton's first chance of the game just before the half hour, but the former Manchester United man wasted a golden opportunity.

He took a touch too many with only keeper Jack Butland to beat, but that allowed Shawcross' replacement Batth to make a superb last-ditch block.

And that block proved pivotal as Stoke broke on the counter and scored the opener.

McClean clinically fired under keeper James Shea for only his third goal of the season.

Harry Cornick had a shot charged down on the edge of the box just before the break, but the hosts held on to their slender lead.

Clucas went close to doubling the lead but Shea produced a fine save to turn the left-foot shot wide for a corner.

But the second goal came in the second minute of four minutes of injury-time as McClean picked out Allen who headed home at the near post.

And Allen got on the scoresheet again with the Hatters' defence caught out soon after the break. His bursting run was not tracked and his finish too good for Shea.

Allen could have had a hat-trick but his powerful drive was deflected wide late on.

Stoke's Michael O'Neill: "I'm very pleased with the result and attitude, as well as lots of aspects for the performance. But we'll not get carried away because there were aspects of the performance that can still be better.

"We got the goal at a good time, but overall it was a good night for us. We're learning all the time about the players. Not only in terms of what they bring tactically, but also about their character. I said to the players before the game let's not be judged on the game on lack of character. We should some really good quality."

Luton's Graeme Jones: "Ultimately the players need to accept responsibility. I'll take responsibility for tactics, no problem. But what you can't do is shoot yourselves in the foot. That's exactly what we did tonight, we left ourselves with another mountain to climb.

"We can't keep doing it, at the minute that's our Achilles heel. It's not frustrating as a manager, it's just impossible to legislate for those mistakes. It's happened too often and, as a result of those errors, you can't play at this level of football and give goals to the opposition. That what we're doing at the minute."