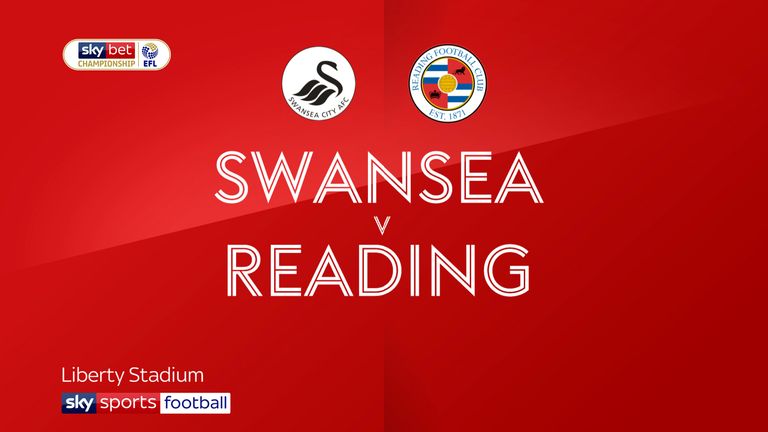 Highlights of the Sky Bet Championship match between Swansea vs Reading

Andy Yiadom scored a last-minute equaliser as Reading salvaged a 1-1 Sky Bet Championship draw to deny Swansea a return to the top of the table.

The Royals wing-back's unstoppable strike earned a hard-fought point and ended his side's three-game losing streak in the league.

It looked as if Swansea were set to reclaim top spot, having protected the lead given to them by Borja Baston's early header after just three minutes.

The Spanish striker's sixth goal of the season sent him to the top of the goalscoring charts but could not stop Swansea's winless run extending to four matches in all competitions.

The visitors avoided a fourth straight defeat ahead of another two testing matches against Fulham and Bristol City.

Reading showed signs of revival despite exiting the Carabao Cup after a penalty shoot-out defeat against Wolves in midweek.

But Jose Gomes made eight changes to his starting XI, with only Tyler Blackett, Andy Rinomhota and Lucas Boye retaining their places in the side.

The Swans' flying start to the season had hit a bump after a draw and a defeat in their previous two matches, but they raced into the lead after three minutes.

Connor Roberts moved the ball forward to Andre Ayew, who made a yard of space and delivered an inch-perfect cross in between Michael Morrison and Liam Moore. Borja spotted his opportunity, moved into the space and glanced in a header.

George Puskas latched onto a scuffed Jordan Obita shot and flashed a shot inches over the crossbar as Reading went in search of an equaliser.

But Ayew looked determined to double Swansea's lead. First he surged down the right and hit the side netting, before he was put one-on-one with Rafael Cabral following a rapid breakaway by Bersant Celina and Borja.

The Royals goalkeeper rushed out and got to the feet of Ayew to smother his effort.

Boye was lucky to avoid a second yellow on the stroke of half-time for tugging back Matt Grimes, following his earlier booking for a late challenge on Roberts.

Ovie Ejaria almost turned Reading's second-half pressure into a goal when he left Grimes and Jay Fulton in his wake and charged into the penalty area.

But the breakthrough finally came when Yiadom was given space and time to fire a lethal shot across the face of goal and past Freddie Woodman into the top corner to snatch a share of the points.

Swansea boss Steve Cooper: "They should definitely have been down to 10 men. We are definitely on the end of some poor decisions at the moment.

"I was pleased we had an experienced referee today for the first time, as we seem to be getting the ones who are maybe a bit new to it. But we still got the same luck.

"He is going to have his excuses and his reasons, but I could tell he and the fourth official knew they probably were not at their best."

"Lucas Boye is a fighter, he is really physical and he uses his body. He adapted really well to the Championship and I thought it was better not to expose him to the chance he might get a yellow card so I took him off."

"For the way we controlled the ball in the offensive half we should have scored more goals. It would have been so unfair if we went back to Reading with no points. It's a very important point, if we couldn't win at least we got a point and in the way we played."