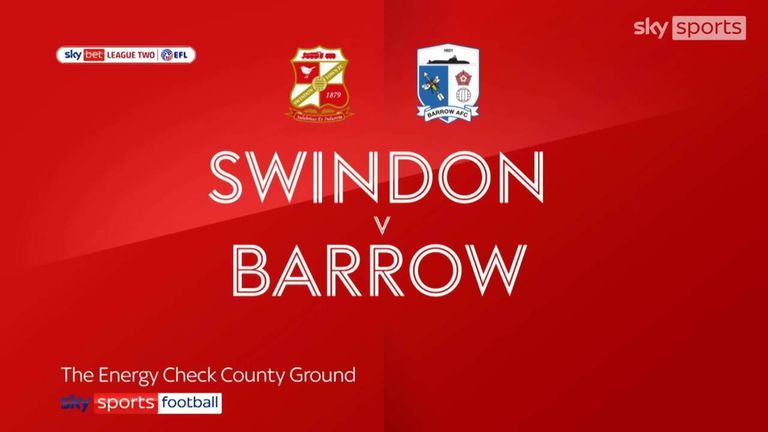 Highlights of the Sky Bet League Two match between Swindon Town and Barrow.

Swindon surged into the League Two play-off positions as Louis Reed’s late winner earned them a 2-1 win over Barrow.

A third straight victory, coupled with Sutton's home defeat to Bradford, saw the Robins move into the top seven with one game to go.

It looked like they were heading for a draw after Matt Platt's late goal cancelled out Josh Davison's first-half opener, but Reed struck with five minutes left to secure a vital home victory.

Davison scored the only goal of the first half in the 22nd minute when the Charlton loanee capitalised on lacklustre defending to meet Akin Odimayo's cross.

Midfielder Reed dictated play and was at the heart of a move in the 39th minute that saw Harry McKirdy fire an edge-of-the-box effort over the bar.

Louie Barry and McKirdy both wasted second-half goalscoring opportunities, with the latter left red-faced after rounding the keeper in the 71st minute but making the wrong decision as his shot was blocked.

Platt restored parity in the 83rd minute with his header creeping past Lewis Ward.

But Reed rounded off a brilliant individual performance to save Swindon with a close-range goal just two minutes later.