FREE TO WATCH: Highlights from Tottenham's win over Leeds in the Premier League.

After an abject first half in which Spurs failed to register a shot on target and deservedly trailed courtesy of Daniel James's close-range finish (44), Conte saw the perfect response from his players in the second period as Tottenham's creative energy came flooding back.

Hojbjerg swept home the equaliser from Lucas Moura's pass (58) and the turnaround was complete when Reguilon was quickest to react to Eric Dier's deflected free-kick striking the post to thrash home his first Premier League goal.

The result in this 100th meeting in all competitions between the two sides means Spurs climb three places in the league to seventh position while Leeds remain 17th, two points above the relegation zone.

Man of the match: Sergio Reguilon.

After seeing Tottenham fail to register a single shot on target in the goalless draw at Everton, Conte warned that patience would be needed while his players get used to his methods.

Conte - with his all-action charismatic demeanour on the touchline - was facing a Marcelo Bielsa team for the first time in his managerial career, and he witnessed the visitors make the more confident start as Pascal Struijk stole the ball off Moura to set up Stuart Dallas for a low drive that fizzed a yard wide inside eight minutes.

It wasn't quite clicking for Spurs, who began the game playing like a side that is being stitched back together after a tough opening to a season under a new manager, and certainly following an international break.

Conte hasn't had much time at all to impose those rigorous methods of his, and Spurs' first meaningful attack midway through the opening period saw Heung-min Son's run and cross towards Harry Kane snuffed out easily by Kalvin Phillips.

Kane's confidence looked visibly lifted, fresh from seven goals in two games for England, and he very nearly had a clear sight of goal when Reguilon's cross was brilliantly taken off his head by the retreating Liam Cooper.

Leeds made a quiet start to the campaign as a result of persistent injuries but they arrived in the capital having taken eight points in their previous five games.

Bielsa will feel his players are now slowly finding their feet, and Adam Forshaw came close to crowning his recent return following a lengthy spell out of the game when his speculative shot had Hugo Lloris scrambling as it veered wide.

Antonio Conte made two changes for his first home Premier League game in charge of Tottenham against Leeds.

Cristian Romero was out injured and Oliver Skipp was suspended so Japhet Tanganga and Harry Winks came in.

Leeds also made two changes, with Joe Gelhardt coming in for Rodrigo, who has a foot injury, while Mateusz Klich replaced ill Raphinha.

Leeds, who were 2-1 winners at Fulham in March, were looking to record consecutive away league wins in London for the first time since April 2008 - and they deservedly took the lead on the stroke of half-time. Harrison beat Emerson Royal far too easily having been fed down the left, and his low cross was gleefully accepted by James inside the six-yard box.

Bielsa's biggest problem has been fragility at the back; just one clean sheet so far. This was a chance then for Spurs' stuttering attack to have another shot at making a better impression, but they ended a sixth consecutive half of Premier League football without an effort on target.

That changed within a minute of the second as clever work from Moura slipped Kane through but his shot was blocked by the underworked Illan Meslier onto the post. Kane looked to the skies, but Leeds broke from the resulting corner to test Lloris once more through James' unorthodox toe-poke having cut inside from the right.

Conte had clearly ripped into his players at the interval as within minutes of the restart, his side struck the woodwork for a second time as Moura found Son only for his shot to deflect up onto the crossbar off Diego Llorente.

Joe Gelhardt saw two shots fielded by Lloris and an eventful start to the second period took another turn when Son went down inside the box under a challenge from Phillips. The incident was referred to VAR Darren England but no penalty was awarded.

Tottenham had their tails up now, however, and duly levelled when the lively Moura latched onto Reguilon's pass before Meslier could sweep it, and the Brazilian picked out Hojbjerg to bundle his first-time finish into the unguarded net.

Tottenham were in the ascendancy now as Leeds started to look weary having been so disciplined in the absence of so many key personnel, as Kane rolled Cooper but Struijk came across to make a vital block. Ben Davies was next to get in behind Cooper, managing to get his shot away as he went to ground but Meslier made yet another smart save.

Leeds' respite would be short-lived, however, as following a foul by Cooper on Moura, Dier's free-kick deflected off Struijk onto the base of the post before Reguilon was on hand to poach his first Premier League goal.

Rather than form the foundations of a newly-confident Tottenham, the goal inevitably led to them retreating as Kane survived a penalty scare when Gelhardt's shot on the turn struck his hand by his side.

There was plenty of tension as Conte frantically prowled the touchline urging his players to keep getting forward in search of a third to kill the game off, and he bayed for a reaction from his supporters in the final minutes, but two was enough. 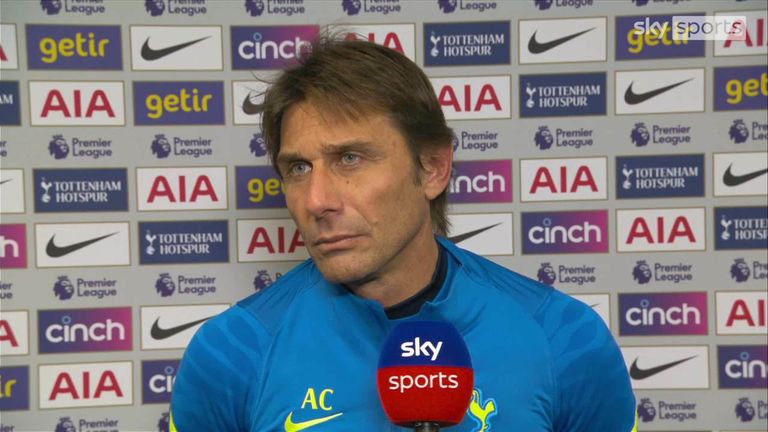 Tottenham boss Antonio Conte gives his post-match reaction to Sky Sports after watching his side come from a goal down to win 2-1 against Leeds.

Tottenham boss Antonio Conte: "We celebrated the win because I think that it was difficult and we knew this. I read the stats of Leeds and they were the first to bring high intensity and run. In the first half, we struggled a lot because they played better than us, they won tackles and they led the game. We conceded possession too much.

"In the second half, we changed the plan tactically and we started to put pressure in every area of the pitch. We created chances to score and maybe we deserved to score more goals. For sure it's an important win because we needed this.

"After the first half, the fans weren't satisfied with the football and I agreed with them. In the second, we changed it totally. I changed the plan tactically but they then played well and with personality.

"I said to the players that we have a lot of space for improvement and I'm pleased as many players were involved today. Winks struggled in the first half but played with personality in the second. Sessegnon coming on was also important so it's right to celebrate with passion.

"I have a great passion and I want to transfer it in all the environment. When it comes to passion, you either have it or you don't. 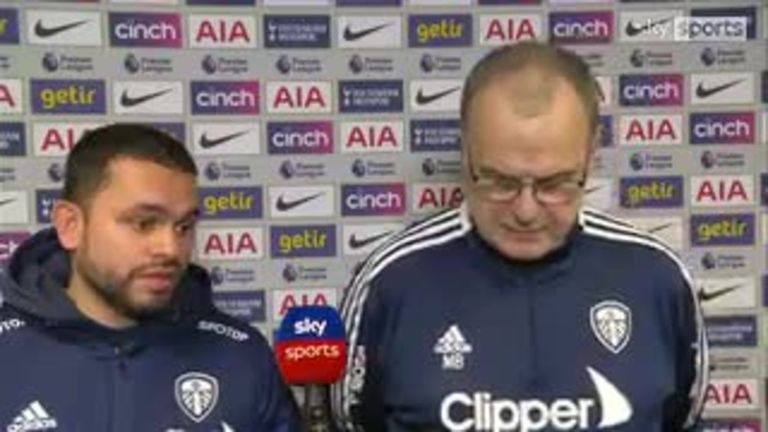 "This win is very important because we struggled today. We played two different games and they beat us on the tactical aspect in the first half. To play against Leeds and against Marcelo Bielsa is not easy. We must be satisfied. This is only a point from which to start for the rest of the season."

"The final half an hour of the game was difficult for us. The game presented a difficulty that I saw clearly. In that first half, on their back three and two midfielders, we had a lot of presence which stopped them getting the ball to their front three but we lost that in the second half.

"Their two midfielders managed the ball a lot better and their forwards received the ball in better conditions. I started seeing the problem and tried to solve it in different ways."

Analysis: Conte brings back the noise

"He has only witnessed two games so far, but Antonio Conte doesn't do matches at the Tottenham Hotspur Stadium by halves. Following that chaotic victory over Vitesse Arnhem here in the Europa Conference League, his side staged a brilliant comeback to ensure momentum remains intact under their new ebullient head coach.

"As Andre Marriner blew on his whistle for a final time, Conte turned to his bench and the first person he hugged was Reguilon. The match-winner looks set for a very important role under the Italian. Noticeably, Steven Bergwijn brushed past him in disappointment at having not been called upon, but that is the mentality under Conte. It is his way or the highway.

"Conte is constantly active and he will try to turn this world-class stadium into a fortress under his stewardship. He has now won each of his last 17 home league games as a manager, with the previous 16 all coming with Inter. The Italian has won his first home league match with each of his last five clubs (Siena, Juventus, Chelsea, Inter, Spurs).

"The last time Spurs were here in the league fans turned on Daniel Levy and the board and dispersed in their droves long before their 3-0 loss to Manchester United was confirmed.

"That United win papered over the cracks and they remain in disarray as Tottenham acted to prise away one of the few elite managers available. Conte has brought the noise back and here was the perfect example of why Spurs wanted him all along."

Man of the match - Sergio Reguilon

Reguilon claimed the last week in training had been one of the worst in his life given the mental and physical demands placed on him and his team-mates by Conte.

The former Inter Milan and Chelsea boss is known for working his players extremely hard on the training ground and that is clearly no exception for the Italian in north London.

"Now I'm the most happy person in the world. My first goal in the Premier League. We get three points. It's unbelievable, it's amazing. And now we continue," said Reguilon.

"They started really good. On the half-time, the gaffer said 'go man-to-man' and we did and we went with everything. This is the way. We were losing the first half and our mentality was like a big team and we get the three points."

He became the fourth Spaniard to score in the Premier League for Spurs after Nayim, Roberto Soldado and Fernando Llorente.

Tottenham face NS Mura in the Europa Conference League on Thursday at 5.45pm before returning to Premier League action on Sunday against Burnley at Turf Moor; kick-off 2pm.