Ajax put one foot in the final of the Champions League with a 1-0 semi-final first-leg victory over toothless Tottenham.

Slicker and sharper than their hosts, Ajax's crop of talented youngsters pinned Spurs back during an utterly dominant opening 30 minutes with Donny van de Beek (15) scoring a priceless away goal.

Spurs looked short on confidence and quality in the final third without the suspended Heung-Min Son as they failed to test Andre Onana with any meaningful attempts, with just one of those hitting the target. Mauricio Pochettino's men have now scored just once in their last four matches in all competitions as Harry Kane's absence starts to become very apparent.

Jan Vertonghen had to be helped from the field just before the break after suffering a nasty gash to his nose. He received treatment on the field before attempting to play on, but moments later signalled he could no longer continue and was steadied by Pochettino before being guided down the tunnel by medical officials.

Ajax winger David Neres almost put the tie beyond Spurs but his low strike bounced back off the post to keep Tottenham's hopes alive ahead of the return leg.

The result was another impressive away victory for Erik ten Hag's side, who are now nine games unbeaten in this season's competition, with wins at Real Madrid, Juventus and Spurs to savour.

Man of the match: Daley Blind

Both sets of players were welcomed to the pitch by a message across the South Stand that read, 'To Dare is To Do'. Only only one team heeded that advice and it was the visitors.

When is the second leg?

Spurs stood off, with a ploy of playing on the counter, but Ajax's midfield drove their team forward and got their reward on 15 minutes. A one-touch move sliced through the Spurs defence with Van de Beek the man on the end of the final ball. Kieran Trippier was keeping the Ajax star onside and he calmly finished past Hugo Lloris from 10 yards out.

Van de Beek tried to add another to his tally on the half-hour but decided to test Lloris from a tight angle instead of squaring to Dusan Tadic and his effort was dealt with by Lloris.

Vertonghen had to be helped from the field just before the break due to the injury to his nose, which allowed Pochettino to bring on Moussa Sissoko and switch to a 4-4-2 formation. The Frenchman's introduction lifted Spurs, who settled into a better rhythm with Dele Alli testing Onana from 20 yards.

Ajax did not have things their own way as the game ticked on but Spurs were careless in the final third.

Despite their clear satisfaction with a 1-0 lead, the Dutch side almost doubled their advantage with 14 minutes remaining when Neres fired a low strike which cannoned back off the post.

Only one of the 17 previous teams to lose the first leg at home in a European Cup/Champions League semi-final tie has progressed into the final. Spurs are still in the tie but a huge improvement is required.

"I wasn't involved. It was the doctor's decision. I think it's so important, the rules and the protocol. Our medical staff follow the protocol." 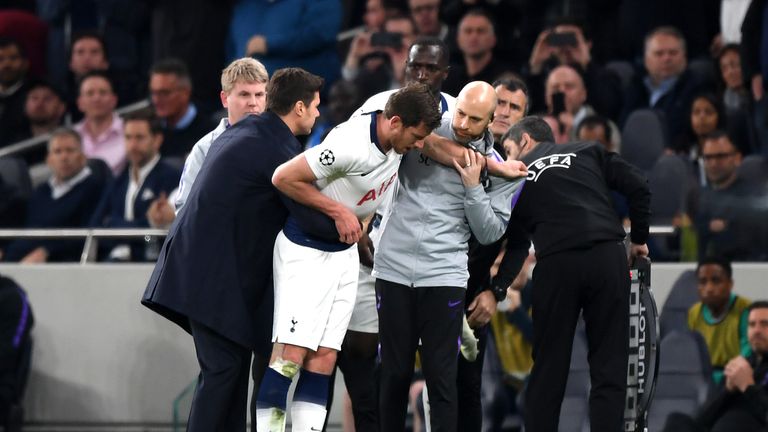 Man of the match: Daley Blind

Manchester United will be looking on enviously at this performance. The Ajax defender was near-faultless at the heart of the Ajax back-line, making a game-high eight clearances and four interceptions as Fernando Llorente and Lucas Moura were completely outplayed by Blind. In a side full of such youthful exuberance, Blind's experience is playing a key role in Ajax's remarkable run.

Pochettino said: "We didn't create many chances. We arrived in the last third but didn't find a way to create chances. I think we felt though that we can be in the tie in that second half. We took more risks. It gave us the hope that the second leg is going to be tough for us and them. Today wasn't our best game and we cannot start the game like this." 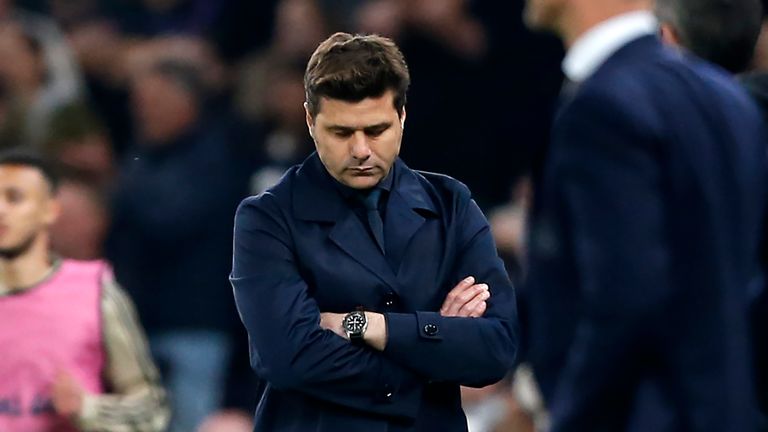 Tim Sherwood on The Debate: "We have to give credit to Ajax. They came out of the blocks in the first half. They're young, energetic, exciting - lots of pace and movement. Their passing was on point and they really opened up Tottenham. Sissoko came on because Vertonghen was injured but it kick-started Spurs. He gave them some drive in midfield and they finished the stronger side. Spurs have been down several times in this competition - it's all to play for."

Liam Rosenior on The Debate: "What would Pochettino have learned? Not to play 3-5-2 against Ajax. As soon as they changed to a diamond, they pressed Ajax higher up the pitch. Being 1-0 down is difficult - Ajax have some incredible young players - but Pochettino will have learned some tactical lessons. And having Son back will be huge because Ajax leave big spaces in behind." 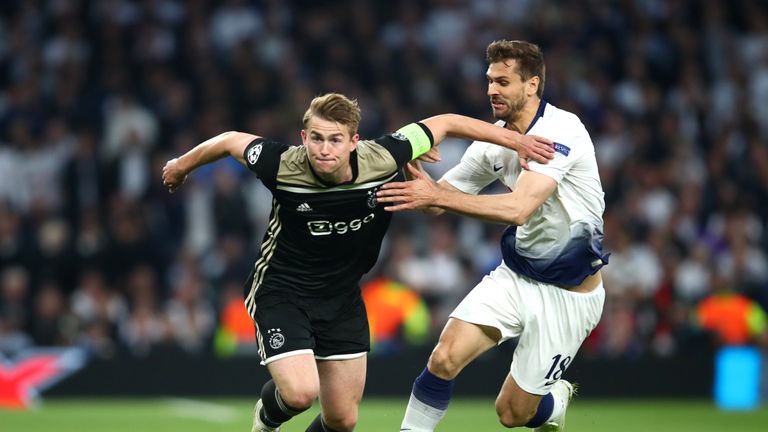 Spurs are back in action on Saturday lunchtime against Bournemouth, live on Sky Sports, as attention turns back to the race for a top-four spot in the Premier League. Ajax will have eight days off now to prepare for the second leg in Amsterdam.