Gavin Gunning was sent off after 15 minutes for Forest Green, before a thumping effort from Banks secured a first leg win for Micky Mellon's side. 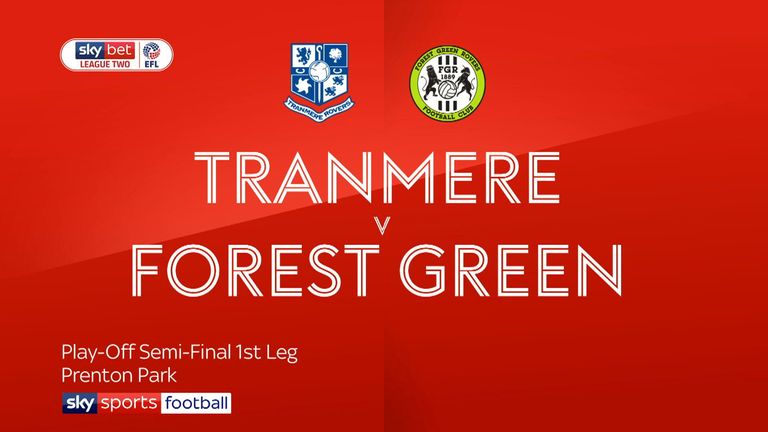 The visitors were reduced to 10 men after just 15 minutes, when Gavin Gunning's indiscipline saw him shown a red card, before Tranmere made their advantage count through Banks' wonderstrike (26).

James Norwood - the highest-scoring player in the top four levels of English football - passed up several chances as Micky Mellon's side failed to make their numerical advantage, but a steely display from Forest Green's defence ensured Monday's clash at The New Lawn remains open.

Man of the match: Nathan McGinley

How Tranmere earned a narrow victory at Prenton Park

Forest Green had already edged a feisty affair 1-0 on Good Friday and though the opening exchanges were relatively even, an early altercation perhaps shaped the proceedings that would follow.

After Gunning was bundled to the floor by Tranmere's Jay Harris, he appeared to lose his cool and lash out at his opponent - catching him in the thigh with his studs - leaving referee John Busby with no choice but to show the red card.

Placed into a similar position, some sides would capitulate, yet the visitors coped well and only went behind after a brilliant strike from Banks; his thumping shot hit the underside of the bar and bounced clear, but was soon awarded by the Goal Decision System.

From certain angles, it looked as though Norwood had volleyed a second just after the half-hour, before he spooned a close-range effort over from the resulting corner and, on the stroke of half-time, he struck over twice from a pair of whipped crosses from right-back Jake Caprice.

Rovers boss Micky Mellon made no fewer than six changes after his side's 3-1 defeat to Crawley on the final day of the season. Connor Jennings and Jake Caprice were among the players to return, with a group, including Harvey Gilmour, Ben Tollitt and Chris Dagnall making way.

It was, seemingly, all about damage limitation from Mark Cooper's Forest Green after the restart, though striker Christian Doidge was fortunate to stay on the pitch after an apparent elbow on Banks; his frustration evident after being denied a penalty three minutes into the second half.

Cooper's tactics paid off in the second half as his side, with Nathan McGinley leading by example, stopped Tranmere in their tracks time after time. Goalkeeper Lewis Ward was called into action twice inside the final 15 minutes, but the hosts simply couldn't find a way to beat him.

Man of the match - Nathan McGinley

In a game where the Forest Green defence was, at times, placed under significant strain from the Tranmere front four, McGinley coped superbly well, making a good block to deny Jay Harris in the first half and, generally, working well with central-defensive partner Farrend Rawson to help decrease the influence of Norwood and Co.

Micky Mellon: "I'm delighted - it is what it is, isn't it? You have to come out of the home tie, I believe, with something to take into the second. We obviously wanted to try and get another one, but it wasn't to be; it's difficult to play against a camped in back-five with three players in front. 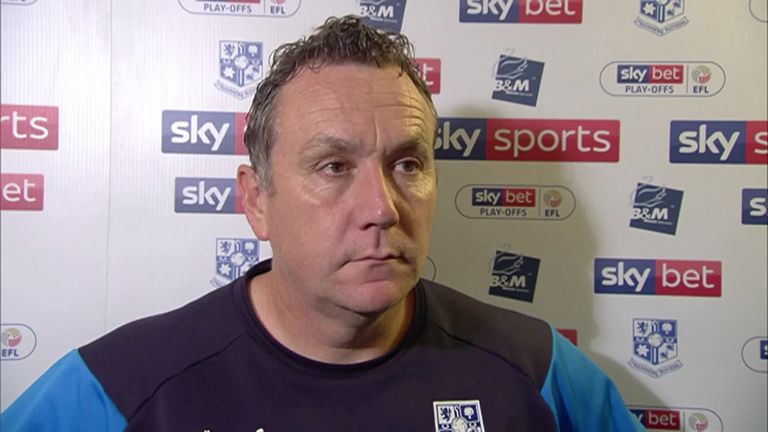 "It's difficult because there are a lot of bodies in there. At the end of the day, you take any advantage you think you can in these play-off games and you move on.

"I haven't seen it [the Doidge penalty decision], so they must have better eyesight than me.

"I see us 1-0 up with two halves of football to play. We'll get the boys rested, get down there and go and get involved in another fantastic atmosphere. That's what it's all about, managing and playing in games at this stage of the season."

Mark Cooper: "It was outstanding, wasn't it? You look at the way we played with 10 men and it was incredible, I never had any doubts about that. It did feel really unfair throughout the evening, I must say, in terms of what we had to put up with, but we've come through it and we've given ourselves an opportunity on Monday.

"There's no excuse for it [Gavin Gunning's apparent kick] but if you are going to send people off every time there is contact, then it's a bit harsh. Gav knows better, but I think it's a bit harsh. 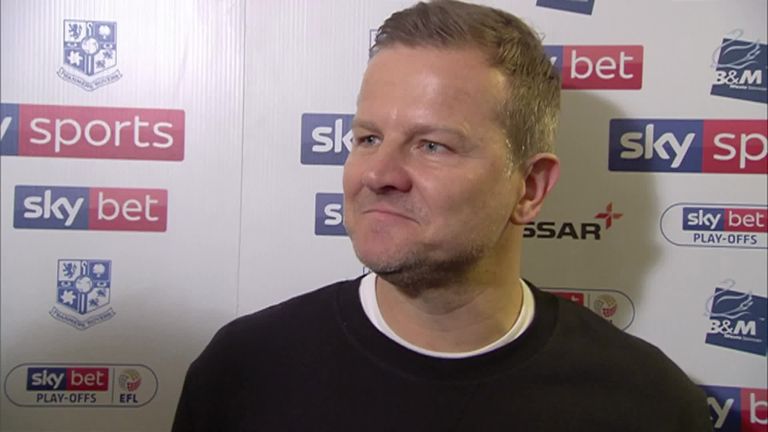 Forest Green manager Mark Cooper praised his players for their resilient performance, having gone down to 10 men in the first 15 minutes of their League Two play-off semi-final first leg defeat to Tranmere

"When you come to Tranmere, they've got a really good team and really good players, so you know you're going to have to defend, but also try to keep the ball as well and we did. We created a couple of brilliant opportunities.

"You saw last night in the Newport game - we aren't playing tiddlywinks, this is professional football and livelihoods are at stake, so things need to be better than that. It's a blatant penalty [when Doidge was brought down] and a red card.

"We approach Monday with a lot of confidence, a lot of belief and a lot of determination. I know we'll take it as far as we can, give everything and go into it fully confident."

The two sides meet back at Forest Green's home, The New Lawn, for the second leg on Monday evening. Coverage gets underway on Sky Sports Football at 7.30pm and kick-off is at 7.45pm.