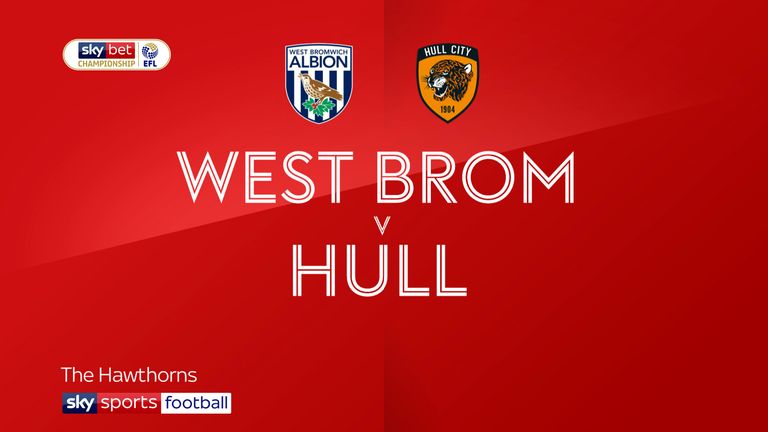 Highlights of the Sky Bet Championship match between West Brom and Hull.

West Brom secured a thrilling 4-2 victory over Hull to move closer to a Premier League return.

Charlie Austin, who turned 31 on Sunday, grabbed his 11th goal of the season as the Baggies clinched the win over the relegation-threatened Tigers at The Hawthorns.

Ahmed Hegazi, who was sent off late on, Kamil Grosicki and Grady Diangana also netted for Albion to close the gap to Leeds at the top of the Sky Bet Championship to a point.

Kevin Stewart and Mallik Wilks twice levelled for the Tigers who remain a point above the drop zone.

Second-placed Albion started the day just two points ahead of chasing Brentford, after the Bees' 3-0 win over Wigan, while Leeds had stretched their lead to four points.

But the Baggies responded in style by taking a fourth-minute lead.

Matheus Pereira drilled in a cross which Stewart failed to deal with and Austin was left unmarked to control and fire past George Long.

It was the perfect start but Hull nearly hit back nine minutes later when Hegazi scrambled Josh Magennis' deflected header off the line.

The struggling Tigers ended a run of 13 games without a win with victory over relegation rivals Middlesbrough last week and had clearly been boosted by the change in fortune.

Grant McCann's side refused to wilt despite Albion's early goal and the Baggies surrendered their advantage after 24 minutes.

The hosts had not looked comfortable defending corners and when Sam Johnstone flapped at George Honeyman's delivery Stewart's deflected drive flew in.

Albion needed a response and when Grosicki forced Long into a near-post save it paved the way for their second goal eight minutes before the break.

Pereira swung in the corner and Hegazi ran unchecked to head in his first goal since November 2018.

It sparked an Albion onslaught as Jordy De Wijs denied Pereira and Austin while Rekeem Harper drilled over before Austin miscued after being picked out by Dara O'Shea.

In first-half injury time Long saved well from Pereira and the Baggies briefly looked like they might rue their missed chances.

Hull had ridden their luck but levelled three minutes after the restart when Wilks' firm header from Leo Da Silva Lopes' cross found the corner.

But, just 76 seconds later, Albion made it 3-2, Pereira's pass dissecting the Tigers' defence for Grosicki, who moved to The Hawthorns from Hull in January, to curl beyond Long.

The game was suddenly wide open and Wilks could have made it 3-3 only to blaze over after an excellent run.

De Wijs glanced over as the Tigers chased another leveller but the Baggies wrapped up victory with 14 minutes left when substitute Diangana cut into the area and fired in low off the post.

But they ended the game with 10 men after Hegazi was sent off in injury time for a second yellow card.

West Brom's Slaven Bilic: "The teams who are below us, Brentford, Fulham and Forest are doing well but they are hoping.

"We have to continue being brave and relax in a positive way. Today was a game to enjoy.

"It was a very frantic match, the stage is frantic. It was a very open game, we didn't want it to be open when they were getting the ball.

"On the ball we were excellent but they put us under pressure with a very simple way of football. We were a little afraid they were going to hurt us.

"We are back on track and I'm really pleased with that."

Hull's Grant McCann: "I think some of the goals are unacceptable.

"The first one we tried to bring it down rather than head, we switched off for the third and the fourth was a sucker punch. In an attacking sense we were excellent.

"The second goal was the worst. Jordy (De Wijs) knows himself, he made a mistake and hopefully he doesn't make any more.

"We've worked hard on attacking set-pieces. We're seeing benefits of that. Every ball (George) Honeyman put in we were so close. The work has gone in and we're looking better defending and attacking set plays."