Matt Smith earns point for Millwall after an Alex Pearce own goal had put West Brom in front. 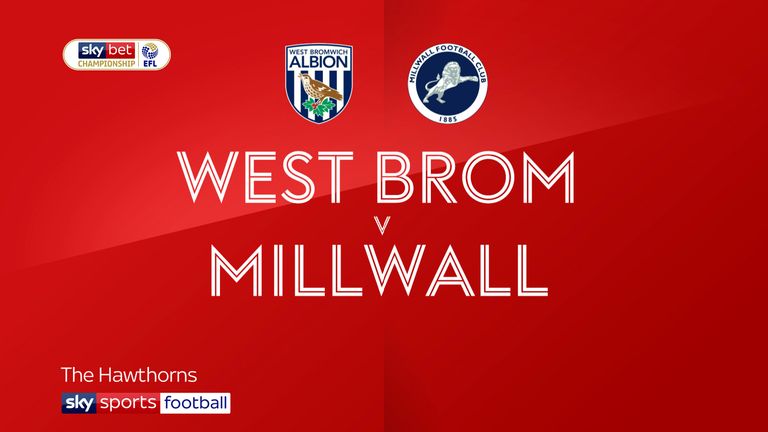 Highlights of the Sky Bet Championship match between West Brom and Millwall.

West Brom and Millwall both moved onto four points from their opening two fixtures after an entertaining 1-1 draw at The Hawthorns.

Having won on the opening day, both sides had to make do with a point apiece.

The hosts, who had the lion's share of possession, took the lead through an Alex Pearce own goal in the 57th minute.

Substitute Matt Smith salvaged a point for Millwall, though, in the 75th minute when he fired in from close range.

Albion head coach Slaven Bilic opted to stick with the same side that beat Nottingham Forest last weekend, meaning that the four signings the club secured on transfer deadline day were not deemed ready to take part.

Lions boss Neil Harris, meanwhile, made three changes to the side that beat Preston on the opening day; there were starts for Tom Bradshaw, Bartosz Bialkowski and Ryan Leonard.

The hosts began the match in control of proceedings, and thought they'd broken the deadlock early when Filip Krovinovic expertly curled home from all of 25 yards; striker Kenneth Zohore, though, had been flagged for offside in the build-up.

At the other end, there were half-hearted penalty appeals when Tom Bradshaw collided with Nathan Ferguson in the box, before Ben Thompson then rose highest at the back post to glance a header wide of goal.

The best chance of the first half came to West Brom, though.

Millwall defender Jake Cooper was caught in possession by Matt Phillips, and the winger raced towards goal. He dinked the ball back into the path of Zohore, who side-footed it first time and perhaps ought to have scored, but Bialkowski denied him with his feet.

West Brom continued to dominate heading into the interval, and might have taken the lead had Kyle Edwards' inviting cross not been out of reach for those waiting in front of goal.

The second half began in much the same was as the first had; the home side picked up where they had left off and applied plenty of pressure to the visiting goal.

They did get their reward in the form of a set-piece.

Phillips' free-kick was aimed towards the far post, and into the path of Kyle Bartley. Replays suggested though, despite appearing to be a Bartley header initially, that in fact the final touch came from Pearce.

Bialkowski got a strong hand to it, but could only palm it into the roof of the net.

That prompted Harris into changing his set-up, and he threw on the towering Smith in the hope of rescuing a result.

It was a substitution that would prove to be inspired; the summer signing from Queens Park Rangers equalised with 15 minutes remaining.

The Londoners pushed forward in search of a levelling goal, and after a goalmouth scramble Smith took advantage of the bouncing ball to fire home past Sam Johnstone.

West Brom regathered themselves in the final throes and pushed hard for a winner, but Harris' side held on and ensured the spoils were shared.

Slaven Bilic: "We had a lot of the ball, but we expected that. Our passing was good, was quick at the back and in the building up. In the first half we had complete control but I wanted us to have that 20 yards further up.

Neil Harris: "It's another real positive for the group to show the belief, the character and the confidence to come back from conceding a disappointing goal at a place like this, and then to go on and look so threatening. We deserved a point. Matt Smith was a handful, wasn't he? Delighted he got the goal. He could've had eight in pre-season - I've never known somebody to have such bad luck! He can score goals in this team.

"The disappointment was conceding the goal that we did - it was poor and we should do better from that set-play - and their other opportunity came from us giving the ball away on the edge of our own box. I'm pleased for the team that Bart (Bartosz Bialkowski) was able to show his qualities as a goalkeeper in that moment."