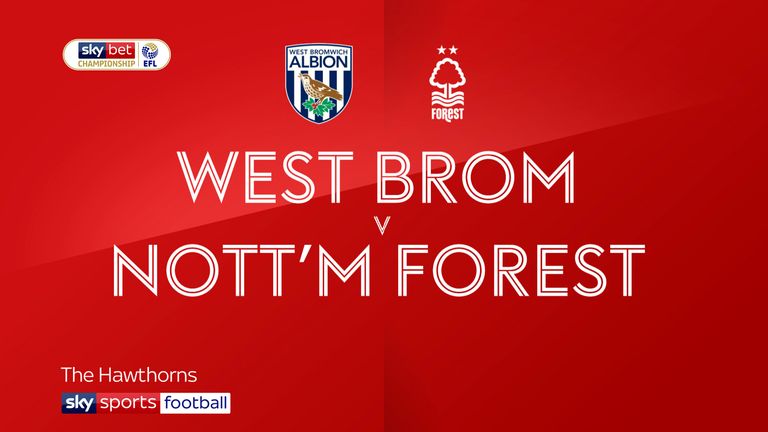 Matty Cash scored a stoppage-time equaliser as Nottingham Forest denied West Brom the chance to move nine points clear at the Sky Bet Championship summit in a 2-2 draw at The Hawthorns.

Sheffield United loanee Callum Robinson tucked away his first goal for the Baggies (37), but Kyle Bartley turned a cross into his own net to level the tie at the halfway stage (45).

Forest left-back Tobias Figueiredo netted the game's second own goal to gift the league leaders the lead once more (65), but Cash managed to earn a valuable point towards the visitors' promotion hopes with a late angled strike (90+1).

The result cuts West Brom's advantage over second-placed Leeds to four points, while Sabri Lamouchi's team stay fifth, behind Brentford on goal difference, after their 10th draw of the campaign.

How Forest secured a dramatic point at The Hawthorns

On the opening day of the season, West Brom had taken the points with a 2-1 win in the reverse fixture at the City Ground, having eased to victory despite Cash's early opener. In the West Midlands it was they who burst out of the traps, but as quickly as they had done so, they almost slipped behind.

An industrious run down the left flank led to a cross from Yuri Ribeiro that found Lewis Grabban six-yards out; the striker has a fearsome reputation from that sort of distance, but he planted his header wide of the left-hand post.

Ribeiro was at the heart of the action soon after, but for totally different reasons. He leapt to hook the ball clear on the edge of the Forest penalty area, but was fouled by Jake Livermore, who was fortunate to escape punishment after he caught the left-back's shin with an apparent mid-air stamp.

Eight minutes before the break, West Brom took the lead when Robinson collected Matheus Pereira's pass after he had picked Samba Sow's pocket, opened up his body and curled past Brice Samba, but it was level at the break after Bartley connected with Sammy Ameobi's cross before Grabban could.

74' WBA 2-1 #NFFC: Keith Stroud is furious as he's forced to give a yellow card to Matt Phillips for a late challenge on Yuri Ribeiro.

After a messy start to the second half, Slaven Bilic's team edged themselves back in front, but in controversial circumstances. Though Ameobi had been fouled in the Baggies' half, referee Keith Stroud waved play on, allowing them to counter with a one-man advantage and retake the lead when furious Figueiredo slid a Livermore cross over the line.

West Brom boss Slaven Bilic stuck with the same starting line-up that beat Reading 2-1 in midweek, with this the third game in succession he has named the same team.

The feisty, dramatic nature of the game continued, firstly when Joe Lolley was denied a penalty after Bartley handled his cross and then when Figueiredo came within inches of a second own goal of the afternoon.

It took one final twist in the first minute of stoppage-time, when Cash found space to hit a shot across the face of goal into the left-hand corner of the net, earning Forest a point with their only shot on target. But though Robinson looked to have won it for the Baggies in the dying seconds when he bundled a Kamil Grosicki free-kick over the line, he was contentiously flagged offside.

West Brom's Slaven Bilic: "I told the guys I'm going to be disappointed and they're frustrated, but if we continue like this, with the same patterns, focus, energy and quality, then we really have a good chance to do what we want to do.

"This was our best performance, whatever the result - we were always the ones who were better, in ball possession, in number of great situations, creating chances, everything was there. The only thing that was missing was to kill the game at 2-1. But some of our finishing was not good enough, and the goalkeeper made a few good saves."

Nottingham Forest's Sabri Lamouchi: "Some people and refs can make mistakes. I made mistakes on Tuesday maybe and will before the end of the season and we must help them of course. But decisions can change the game.

"I have a lot to complain about. But I am the manager of Forest and must be positive with people, it's part of the game."

Man of the match - Matty Cash

Before this season, 22-year-old Cash had made a career as a midfielder, but when Sabri Lamouchi arrived, he was moulded into a right-back. He's enjoyed great success there this term and loves to bomb forward as often as he can, taking up advanced positions, such as the one he scored his third goal of the season from at The Hawthorns

📊 Matty Cash’s contribution for @NFFC today
47 touches - 1 in opposition box
4 clearances, 4 recoveries
1 block
1 chance created
1 shot, scored Forest’s 2-2 equaliser with their only shot on target
2 of his 3 goals this season have been v West Brom pic.twitter.com/yr5sc3X2kX

Both sides are next in action at 3pm on Saturday, February 22. West Brom travel to Bristol City, while Nottingham Forest host QPR at the City Ground.