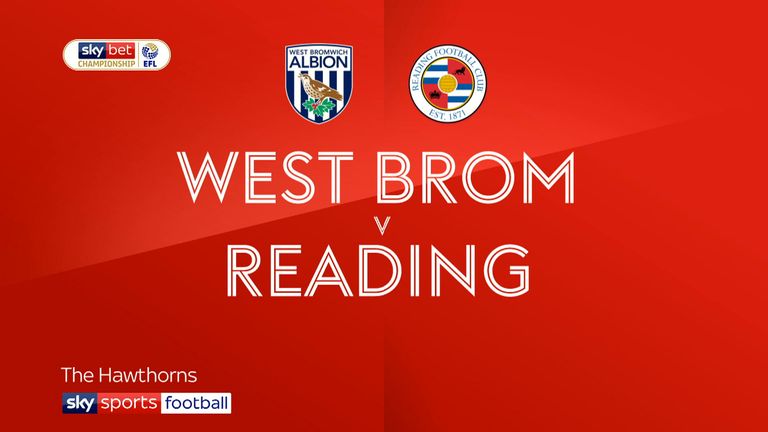 Highlights of the Sky Bet Championship match between West Brom and Reading.

Albion earned their fifth successive home league win thanks to a stunning second-half display after they had fallen behind to Leandro Bacuna's sixth-minute strike.

The hosts did not hit their stride until the start of the second half when on-loan Newcastle United marksman Gayle, who had been named as the Championship Player Of The Month for September, grabbed a 49th-minute equaliser.

Gayle then scored his eighth goal of the season to give Albion a 65th-minute lead before Harvey Barnes struck seven minutes later and Kyle Bartley's first goal for the club, after his summer arrival from Swansea, sealed the win in the 80th minute.

Reading made the perfect start only seconds after Saeid Ezatolahi had threatened to break the deadlock.

His swerving shot from 30 yards was pushed behind by goalkeeper Sam Johnstone but from the resulting corner, Bacuna exchanged passes with John Swift and then surged into a gaping hole in the Albion defence before drilling an angled shot past Johnstone that flew into the net off the far post.

The advantage should have been short-lived as Gayle was inches away from grabbing an equaliser after 18 minutes when he was unable to connect with a Barnes cross.

Reading then threatened to inflict even more damage when a Bacuna pass released Marc McNulty in the 24th minute with the Scottish forward dragging his shot narrowly wide.

Tyler Blackett then volleyed wide from a Bacuna corner after 26 minutes and Andy Yiadom was denied by a smart save from Johnstone at his near post five minutes later as Albion's harassed defence struggled to keep a lively Reading attack in check.

Reading were then made to pay the price for failing to take their chances when Gayle scored the simplest of equalisers.

Albion right-back Tyrone Mears lofted a hopeful cross into the area which deceived the Reading goalkeeper Sam Walker and fell straight to Gayle, who had the simple task of heading home at the far post.

West Brom were a different proposition after the goal and Gayle put them in control with another piece of close-range finishing to deflect the ball in to the net after Bartley had diverted Barnes' header goalwards.

Any hopes Reading had of launching a fightback were then dashed by Barnes who raced on to a pass from Jay Rodriguez and fired a low angled drive past Walker.

Bartley then set the seal on a stunning Albion display when he headed home a corner from Brunt.

Darren Moore: "At half-time I knew that we had to find a way to get back into the game and try and break down a stubborn defensive rearguard. If we were going to win the game we had to go and take it as opposed to Reading give us anything.

"I thought that the changing point of the game was Dwight scoring the first goal. That knocked the stuffing out of them and gave us fresh impetus to win the game. As the chances came we were clinical again and took them very, very well and we ran out the game very strongly."

Paul Clement: "If we had got the second goal it may have been different. We did well in the first half. We played well. It may have been the best that we have played this season. Now at the end of the game we have come off with our heaviest defeat so it is a difficult one, but West Brom are a really good side with Premier League quality players in lots of positions.

"We were a bit deflated after Albion scored their first goal. We have had a tough start to the season but we have made a step but we have to make a bigger step when we come back after the international break. I praised the players at half-time but we knew that Albion would react and they played with more intensity in the second half and they deserved the result."