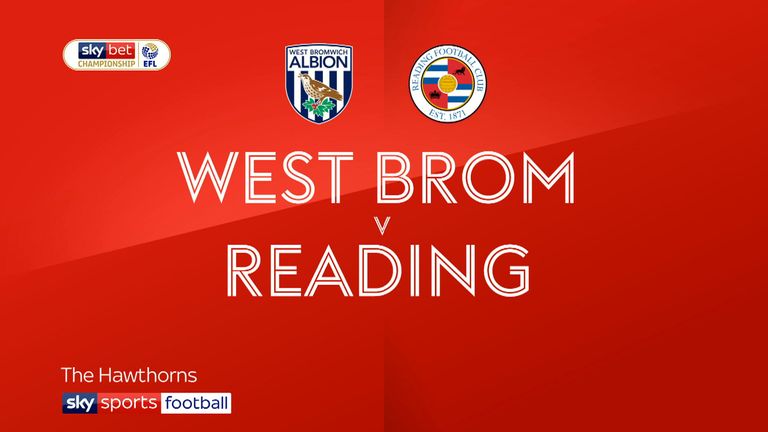 Liverpool loanee Ejaria's stunner looked to have given the Royals victory only for him to concede a late penalty to allow Zohore to earn a 1-1 draw.

Zohore stepped off the bench to score his first Baggies goal but Albion boss Slaven Bilic is still looking for his first win at The Hawthorns since his summer appointment.

The Baggies, who now sit sixth in the Sky Bet Championship, were looking to resolve their home issue after failure to beat Millwall in the league and cup.

Darnell Furlong wanted an early penalty after he appeared to be clipped by Omar Richards but his appeals were waved away.

But despite their bright start Baggies goalkeeper Sam Johnstone made the first save when he beat away John Swift's 10th-minute free-kick.

Reading wrestled a degree of control back after the hosts threatened to overwhelm them as the game evened out.

Midfielder Ejaria was impressing and he forced Johnstone into a smart stop with an angled effort from close range.

Albion continued to get joy down Reading's right but the final ball eluded the otherwise lively Phillips.

The visitors remained more assured in possession and began the second half on the front foot without testing Johnstone.

George Puscas, who scored twice in the 3-0 win over Cardiff on Saturday, sliced well wide but it was the closest the Royals came early on.

They were indebted to Cabral after 55 minutes when his fine stop kept the scores level.

Furlong wriggled free on the right and his low cross found Austin but Cabral stuck out a leg to save his close-range effort.

Albion had begun to ramp up the pressure and wanted a penalty when Filip Krovinovic went down under Andy Yiadom's challenge only for referee Peter Bankes to ignore their pleas.

Diangana then drove over and Reading responded by taking the lead with 19 minutes remaining.

Ejaria had been the visitors' best player and he deservedly grabbed a goal when he was given too much time on the edge of the area to drill into the top corner.

Albion tried to fight back and Zohore's shot was brilliantly blocked by Liam Moore before the substitute fired at Cabral.

But the striker was not going to be denied a leveller from the penalty spot with two minutes left after Ejaria's rash tackle on Krovinovic.

Slaven Bilic: "We deserved to equalise and we just simply ran out of time. We deserved much more based on this performance.

"We are going to have ups and downs but am I happy with the way we are playing? Yes. I am not happy with the results because we should have more points than eight. Goals will come if we continue like this. When we are in this form we have to use that, the momentum."

Jose Gomes: "He (Ejaria) touched the ball, after he touched it there was contact. I don't want to talk abut refereeing decisions, it happens in football. Ovie had a great game. When you have the three points in your pocket until the last minute you feel very disappointed. It's a very good sign, leaving this stadium against one of the strongest teams, having this feeling.

"They couldn't find the way to our goal because we defended very well. My players were brave in their defensive organisation."