Match report and highlights as Robert Page takes temporary charge of Wales at the Liberty Stadium, playing out a goalless draw; Teenagers Giovanni Reyna and Yunus Musah, both eligible to play for England, were handed debuts for USA 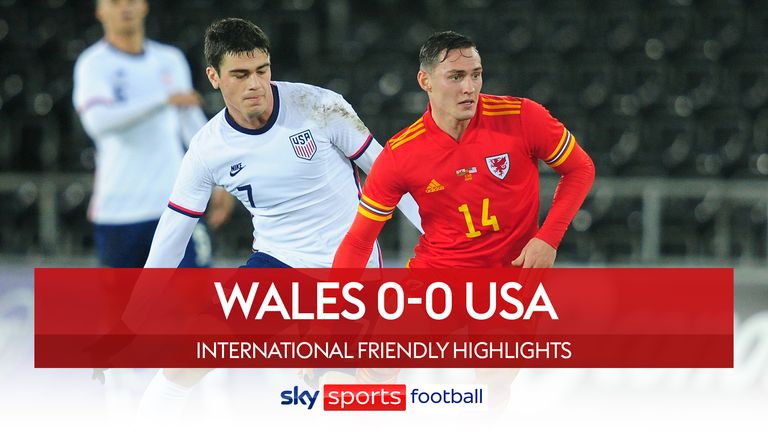 Highlights of the friendly match between Wales and the USA

Wales were held to a goalless draw in the absence of manager Ryan Giggs as the United States shared the honours in a Swansea friendly.

There was plenty of youthful vigour on show and no little intensity, but neither side carried a cutting edge to break the deadlock.

Robert Page, a former Wales captain, was in temporary charge of the Dragons with Giggs, having denied an allegation of assault made against him, not involved at the Liberty Stadium.

The United States players had pledged to take an anti-racism stand ahead of their first game since the death of George Floyd, a black man from Minneapolis, at the hands of police officers in May.

The squad emerged from the tunnel with 'End Police Brutality', 'Be Anti-Racist' and 'World Peace' just some of the slogans emblazoned on the back of their training tops.

Tottenham manager Jose Mourinho had expressed concern over Gareth Bale's workload during the international break, while highlighting the presence of Arsenal coach Albert Stuivenberg in the Wales set-up and a possible conflict of interest.

But Bale was absent from Wales' 23-man squad as Chris Gunter won his 98th cap and captained a side showing nine changes from last month's Nations League win in Bulgaria.

The USA - ranked two places below Wales at 22 in the FIFA world rankings - had not played since February and named a team with seven players aged 23 and under.

Teenagers Giovanni Reyna and Yunus Musah, both eligible to play for England, were handed debuts in a side that included Manchester City goalkeeper Zack Steffen, who wore the captain's armband, and Fulham defender Antonee Robinson.

Midfielder Reyna, the son of former Manchester City, Rangers and Sunderland player Claudio, started after some sparkling form for Borussia Dortmund and stepped into the international arena a day before his 18th birthday.

The two nations had only met once previously, a 2003 friendly in San Jose which the USA won 2-0, and this contest marked Wales' return to Swansea for the first time since 2013.

The USA started in positive fashion with the gloved Reyna prominent, but Kieffer Moore's aerial ability was a distinct threat for Wales and the Cardiff striker held up the ball impressively.

Neither goalkeeper was troubled in the opening half-hour before the contest suddenly opened up.

Danny Ward gathered Sergino Dest's low cross-shot in his six-yard box and then launched a counter-attack which saw Moore set up Tom Lawrence to force a save from Steffen.

Ward was grateful to Konrad De La Fuente firing over from eight yards and breathed another sigh of relief when Sebastian Lletget's clever flick was blocked by James Lawrence at the near post.

Lletget, the only America-based player in the USA squad, forced a stop from Ward at the start of the second half after Newport midfielder Josh Sheehan had replaced Matthew Smith to win his first Wales cap.

Brennan Johnson was also sent on for his debut and almost scored with his first touch after fellow substitute Daniel James had intercepted a USA pass, the Lincoln forward denied by a fine Steffen save.

But it was the last meaningful moment of action as Wales protected their two-year unbeaten home record before Nations League ties against the Republic of Ireland and Finland in Cardiff.

Wales temporary boss Robert Page: "We [myself and Ryan Giggs] spoke before the game and he wished us all luck. We spoke about substitutions and how we anticipated the game would go.

"We'll also have a debrief tonight and we'll go through any little knocks we've picked up, performance, areas we need to look at and have a quick chat.

"I thought there were a lot of positives from the game, regards to keeping clean sheets and confidence we've kept our momentum going."

"I saw some attacks going forward, but not nearly enough. We're still learning the principles and how we want to hurt the opponents and take advantage of their weaknesses."