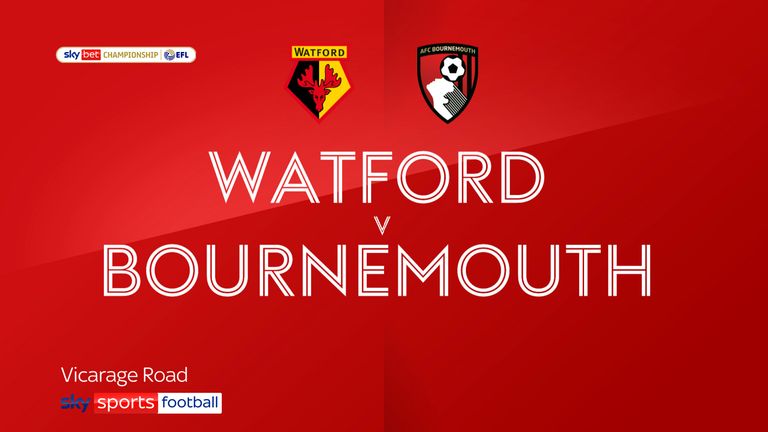 Highlights of the Sky Bet Championship match between Watford and Bournemouth.

Bournemouth dramatically extended their unbeaten start to life back in the Championship as Chris Mepham scored a stoppage-time equaliser in a 1-1 draw with Watford.

The Cherries - who were fortunate not to have Lloyd Kelly sent off early on - conceded the opener, when Croatian frontman Stipe Perica slid his first goal for the club since a summer move from Udinese (12).

Watford were brilliant in defence and looked set to make it four straight wins at Vicarage Road until the fifth minute of time added on when Wales centre-back Chris Mepham hooked the ball beyond Ben Foster from close-range (90+5).

Vladimir Ivic's Hornets are elevated to second ahead of Saturday afternoon's action, with Bournemouth following closely behind in fourth.

Unbeaten Bournemouth started well at Vicarage Road, yet their game plan was almost unravelled inside the first 120 seconds when Lloyd Kelly escaped with just a booking following a reckless, knee-high lunge on Ismaila Sarr, who took some time to, gingerly, get back to his feet.

Justice was, perhaps, served when the Hornets took the lead with a superbly created goal 10 minutes later. A pinpoint diagonal ball from Craig Cathcart was collected by Sarr, who squared for Perica to stretch and tuck the ball into the bottom left corner.

An injury to Jefferson Lerma then saw Dominic Solanke introduced by Jason Tindall as Bournemouth searched for an equaliser. The ex-Liverpool frontman combined well with Arnaut Danjuma and notched up several chances, unlike the somewhat subdued Josh King, who returned to the starting line-up for the first time this season.

There's no doubt the visitors had Asmir Begovic to thanks for keeping them in the game, however. Sarr forced the goalkeeper into a crucial point-blank save moments after the restart, while substitute Domingos Quina saw two thunderous drive turned away from danger.

A shoulder injury to Perica saw the game halted as he received treatment, but while Brazilian teenager Joao Pedro was introduced in his place, Watford couldn't find a way to seal victory, as Mepham helped Kelly's initial strike over the line from close-range to snare an unlikely point.

Watford's Vladimir Ivic: "We can be disappointed because we conceded a goal in extra-time. We worked hard during the 95, 96 minutes and we were very good in our defensive movement and a foul could have been given on Ben Foster before their goal.

"When you miss two chances to make it 2-0, you have to go back to protect the 1-0 at the end. But I am pleased with the behaviour of my players because they gave their maximum."

Bournemouth's Jason Tindall: "I felt we deserved the equaliser. If we hadn't got it, it would have been very harsh, because I felt that we controlled the majority of the game.

"Thankfully for us the goal came and I'm really pleased for Meps. He was really disappointed and down about the goal we conceded against Cardiff in midweek, so to come and deliver a solid performance today and to get the goal right at the end, I'm sure that would have put a smile back on his face."

Man of the match - Nathaniel Chalobah

"I could've given the award to any of the Watford backline today, but in midfield, Chalobah has been first class. I nearly gave him man of the match on the opening day against Middlesbrough but he was everywhere today and thoroughly deserved it."

Watford are next in action on Tuesday, when they travel to Adams Park to face Wycombe, while Bournemouth host Bristol City at the Vitality Stadium the following evening. Both fixtures are available to watch live on Sky Sports Football Red Button.