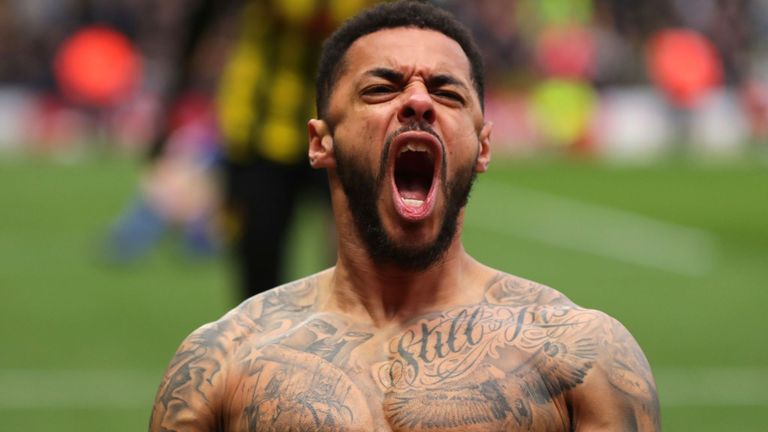 A last-gasp goal from Andre Gray denied Brendan Rodgers his first point as Leicester manager as Watford earned a 2-1 win in the Premier League on Sunday.

Rodgers' debut saw him return to the club where got his first managerial job after being appointed at Leicester on Tuesday, but it was a terrible start for the former Celtic boss as Troy Deeney scored inside five minutes.

Jamie Vardy looked to have secured the draw when he slotted home in the 75th minute, but a lack of concentration from Leicester's defence saw Gray score the winner in the third minute of four added on.

The win sees Watford stay in eighth but go level on points with seventh-placed Wolves, while Leicester remain in 11th with Rodgers yet to win his first game in charge of any team he has managed in English football (D2, L3).

Man of the match: Troy Deeney.

Watford came racing out of the traps at Vicarage Road as they looked to make amends for a 5-0 defeat to Liverpool in midweek. Kasper Schmeichel was forced into a point-blank save inside three minutes after Adrian Mariappa poked a Jose Holebas free-kick towards goal. Gerard Deulofeu also tried his luck with the rebound, but Wes Morgan was there to see it behind.

The hosts took the lead two minutes later when Deulofeu's sumptuous free-kick was glanced home by Deeney as Rodgers began his Leicester tenure in the worst of fashions.

However, Leicester soon found their feet and began to match Watford, although this made for little goalmouth action. The hosts did go close in the 24th minute as Deeney's cross found Abdoulaye Doucoure in the area but Jonny Evans marked him well and managed to poke the ball from his path before the midfielder could convert.

Both sides made one change from their midweek games. Jose Holebas came back into the XI after suspension, replacing Adam Masina, while Brendan Rodgers brought in Wes Morgan for Demarai Gray.

Watford could have added a second just seven minutes after the break. Deulofeu beat three Leicester players to find Roberto Pereyra, who found Doucoure and his strong shot was kept out superbly by Schmeichel.

Vardy scored the first goal of Rodgers' reign to get Leicester level in the 75th minute. Youri Tielemans' superb through ball found him and had too much for his marker Mariappa as he chipped the ball over the oncoming Foster into the net.

Leicester could have nicked a winner as the clock ticked to 90 minutes, but James Maddison's fine cross could only be put wide by returning captain Morgan. However, Watford did take their chance three minutes later to snatch all three points.

The Foxes defence were caught when Etienne Capoue collected a Schmeichel goal-kick and played in Deeney on the right-hand side. With his first touch, the Watford captain hooked the ball forward for Gray, who had acres of space in between Morgan and Harry Maguire, before slotting home past Schmeichel.

Javi Gracia: "You have the reward at the end of the game. I thought we played well in the first half - better than the second. We started creating very good chances with Gerard [Deulofeu] after we scored and maybe in the second, we lost the possession and we had to defend. We then scored in the last minute and it is something amazing for us.

"There are nine games left and we already have 43 points so who knows what is going to happen in the next games, but what I can feel is the ambition, the character of the group and they always want more and more." 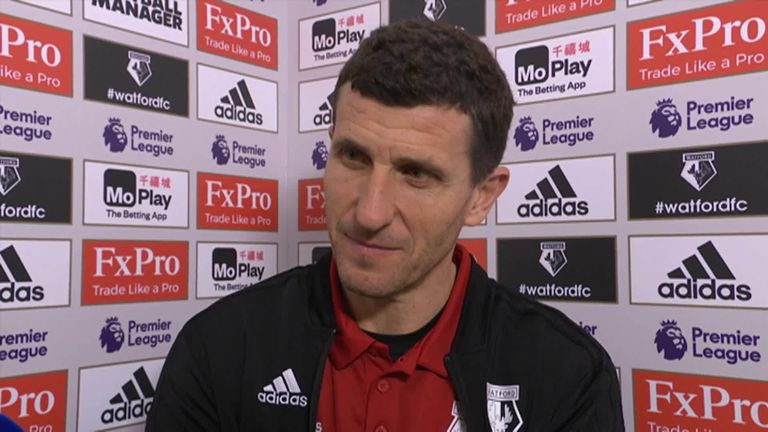 Brendan Rodgers: "I was so pleased with some of the quality in the game today from the players. It's a tough place to come here and we're obviously disappointed to lose the game late on, but there are good signs from today. We'll keep getting better and do some more hard work next week.

"I said to the players today that I didn't have any expectations from them, and I didn't want them to feel the pressure. I just wanted them to go and play because when there is change, sometimes it can be difficult." 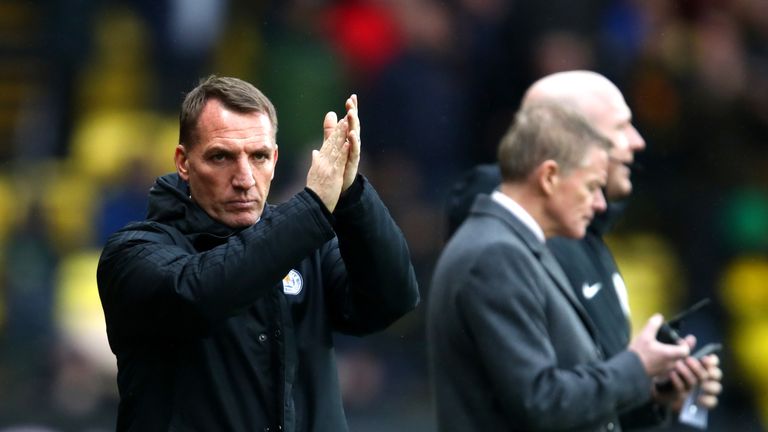 Brendan Rodgers praised Leicester's team spirit, despite losing 2-1 at Watford in his first game since joining from Celtic

Man of the match - Troy Deeney

There were plenty of laughs and smiles for Deeney's old friend and fellow captain Morgan before the game, but on the field, the Watford striker was nothing but ruthless. He got Watford off to the best start with his glancing header and showed his importance with the number of fouls committed against him.

But while the decisions did not always go his way from referee Jon Moss, he showed great composure and leadership to keep pushing Watford forward and it paid off when he set Gray up for the winner. He worked tirelessly, chased down even the most hopeless of balls and was the driving force behind Watford's win on Sunday.

After the game, manager Javi Gracia said: "I think everybody knows how important Troy is for us. On and off the pitch, his personality, ambition and character for the game and out of the game as well. Today, he got the assist for the second [goal] and I think all of them made very good work."

Watford will travel to Manchester City on Saturday in the late kick-off while Leicester host Fulham in a 3pm game.