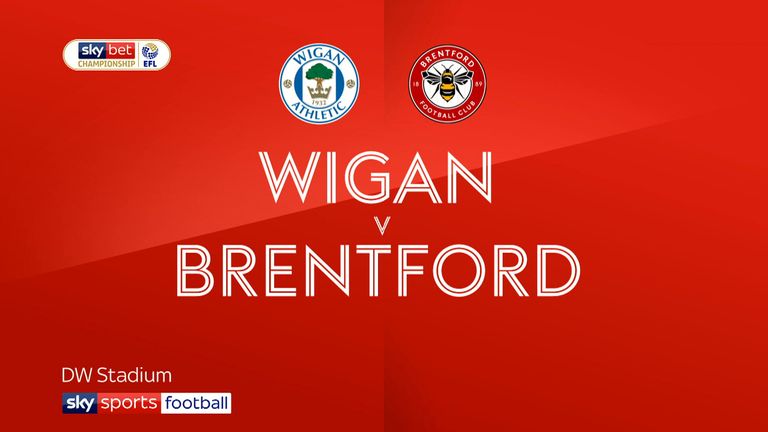 Highlights of the Sky Bet Championship match between Wigan and Brentford

The hosts came closer to edging a winner, only for Reece James to see an audacious attempt from 35 yards tipped over by Luke Daniels, who also denied Chey Dunkley in the second period.

Dunkley did beat Daniels in the final quarter, but he saw his header come back off the woodwork.

Brentford started brightly and Neal Maupay was allowed to advance far too close to the Wigan goal, only to drag his shot wide from the edge of the box.

Wigan then almost grabbed the goal of this or any other season out of absolutely nothing.

There seemed little danger when Michael Jacobs nodded the ball back to James, who was fully 35 yards from goal.

But one swing of the on-loan Chelsea youngster's right boot sent the ball swerving towards the top far corner, only for Daniels to somehow tip it over the top at full stretch.

Wigan suffered a blow when Michael Jacobs limped off before the break, with fit-again Anthony Pilkington coming on in his place.

But the hosts overcame the blow and almost took the lead seconds after the restart.

Nick Powell won the ball on the edge of his own box, and ran 60 yards up the field before playing in Gavin Massey.

The forward was one-on-one with Daniels, but his finish lacked conviction and the goalkeeper was able to save.

At the other end, the visitors came close when a free-kick was flicked on at the near post and hit one of the many Brentford players attacking the ball, rather than the other way round.

Walton was then required to make a great save to deny Said Benrahma, with Kamohelo Mokotjo also firing just wide from distance.

Wigan managed to regain the initiative and a Dunkley header forced Daniels into a brilliant save from James' corner.

The hosts did have the ball in the net when a James free-kick towards the far post found Joe Garner, who guided the ball towards the post.

Pilkington stabbed the ball home from all of a yard but the offside flag was up in any case.

Wigan knew it was not to be their day when Dunkley got his head to a Danny Fox cross, only for the ball to loop beyond Daniels and hit the bar on its way over.

Paul Cook: "I thought it was a very interesting game. I think they're an excellent side who are very well coached. But in terms of penetration and effort, I did think we had the better chances.

"While there's a tinge of disappointment not to have won it, you have to respect the opposition and the league and it's a point towards where we want to be. Our lads gave everything once again and, as a manager, you can't ask for any more."

Thomas Frank: "It was a game of very few chances and I think it was a fair result. We can't get away from the fact Wigan had the better chances and we needed Luke Daniels to keep us level.

"But far too often this year we've been let down with our defending and giving soft goals away, so I was pleased with the solidity in that respect."