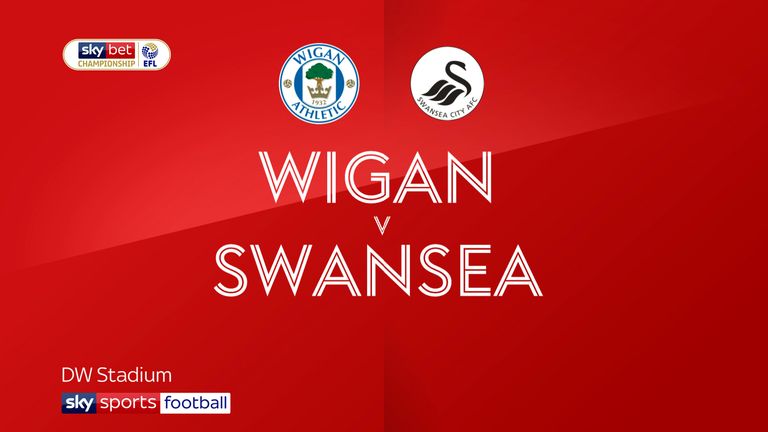 Highlights of the Sky Bet Championship game between Wigan and Swansea

Substitute Sam Surridge headed a stoppage-time winner to earn Swansea a 2-1 win over Wigan and send Steve Cooper’s side second in the Sky Bet Championship.

The visitors edged the opening minutes of the clash and took the lead when long-serving winger Nathan Dyer curled home his first goal of the season (12), but Kieffer Moore scored his first Wigan goal from the penalty spot to level proceedings (21).

Bournemouth loanee Surridge headed home Connor Roberts' cross at the death (90+2) to snatch the three points and retain Swansea's status as the sole side yet to lose on the road in the EFL.

The victory moves the Swans just a point behind Leeds in a congested table, with Wigan's eighth defeat of the season leaving them in 18th, just three points above the relegation zone.

How Swansea snatched win from the jaws of defeat

In spite of their woes on the road, Paul Cook's Wigan had excelled at home this term, so much so that they hadn't conceded a league goal at the DW Stadium since the 2-0 defeat to Leeds on August 17.

That changed inside 15 minutes, despite a largely quiet start. The unmarked Dyer picked up a pull-back from Bersant Celina and tucked a shot past David Marshall into the bottom left corner.

The lead was short-lived, however, as Mike van der Hoorn grabbed a fistful of Chey Dunkley's shirt, allowing Moore to calmly dispatch the equaliser for Wigan after referee Peter Bankes had pointed to the spot.

As the rain poured down after the break in Lancashire, Wigan's chances increased. One of the best came when Jamal Lowe skipped past Ben Wilmot and raced down the left, but instead of squaring for Moore, the ex-Portsmouth man went alone and crashed a shot off the crossbar.

Moore stuttered in front of goal when Joe Gelhardt played him through one-on-one with Swans goalkeeper Freddie Woodman, moments after opposing stopper Marshall had saved at the feet of Connor Roberts.

But it was the visitors who emerged with the smash-and-grab win, when Surridge reacted to Roberts' cross from the right flank, headed the ball into the ground and peeled away in celebration as the winner hit the back of the net.

Man of the match - Kieffer Moore

Having signed from Barnsley in the summer after a prolific campaign in 2018/19, Kieffer Moore embarked on his fourth Championship campaign at the start of August. But as had been the case in three previous attempts, he struggled in front of goal.

In this fixture, he managed to get off the mark for the season and was a threat for the Swansea backline, who had to act in a robust fashion to keep him at bay. But there was plenty for the 27-year-old to work on, not least trying to beat the offside trap, which he fell foul of numerous times.

Wigan's Paul Cook: "Swansea are a good side, with good players, and they caused us problems in the first half with the way they moved the ball. We got to grips with that in the second half, we negated a good side to one which didn't offer a threat - our goalie's not touched the ball second half.

"We've created chances again, that's the crux of it, and it's the biggest thing in football. When those moments come in games, you must take them. Unfortunately for us, we're finding ourselves on the receiving end of some very heavy punches at the moment. The chances come, we don't take them, but that's football."

Swansea's Steve Cooper: "Having gone 1-0 up early, I think there was an opportunity for us to keep going and play well and dominate the game. And we are a little bit disappointed we weren't able to capitalise on the good start we made, and gave away a poor goal.

"I know they had a lot of corners and balls into our box, but our goalie's not really had to make a save in the game. The reality is we defended them really well, and when you do that you always give yourself a chance to win the game. We left it until late, but it was a great cross, a great header and we're all very happy."

Wigan host Brentford at the DW Stadium next Saturday at 3pm, while Swansea travel to Hillsborough the same afternoon to face Sheffield Wednesday.