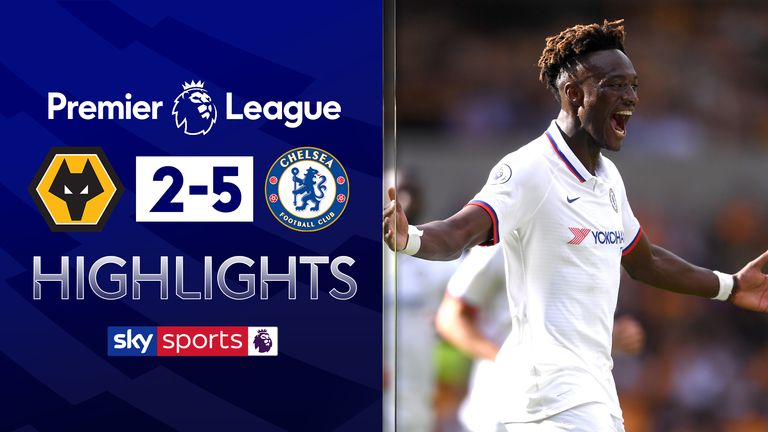 FREE TO WATCH: Highlights from Chelsea's 5-2 win over Wolves in the Premier League

It was defender Tomori (31) who got the scoring under way with a sensational long-range curler before Abraham (34, 41) added two more in the first half.

The 21-year-old scored the next two as well, completing his hat-trick in the 54th minute before handing Wolves a lifeline with an unfortunate own-goal (69). Patrick Cutrone added another for the hosts with five minutes to play, but Mason Mount (90+6) had the last word as he slotted home with the final kick of the game.

It was the second Premier League win of the season for Frank Lampard - sending Chelsea into sixth with eight points - while Wolves remain winless in the league ahead of their Europa League group stage opener on Thursday.

The opening half an hour was a muted affair, and there was not a shot on target until Tomori's sensational opener in the 31st minute.

After a poor corner routine from Chelsea, Jonny's attempted clearance found the defender at the top of the area, and he pinged a wonderful, curling effort into the far corner for his first Blues goal.

Three minutes later, and Abraham doubled the lead. Tomori was involved again as he fed Mount inside the area, with the latter going down after contact from Conor Coady. While the crowd and players were calling for a penalty, the loose ball fell to Abraham who took a touch before hitting home on the turn.

Man of the match: Tammy Abraham.

The 21-year-old then nabbed another double - his third in successive games - in the 41st minute as he continues to impress in the Premier League.

Marcos Alonso collected a Jesus Vallejo clearance at the top right corner, before spotting Abraham in the middle. As the ball was delivered, the striker nipped in front of his defender Coady to head home Chelsea's third.

It took nine minutes of the second half for Abraham to complete his hat-trick. He collected a lovely floated pass from Jorginho under pressure from Coady, before tricking his way past the Wolves captain and racing onto the ball again. After that, it was a classy finish into the far corner as Chelsea made it four.

Abraham was involved all over the pitch and inadvertently handed Wolves a way back into the match with a 69th minute own-goal. Romain Saiss headed a Joao Moutinho corner towards the net, which grazed the arm of Abraham on the line. The ball then slipped through the hands of Kepa Arrizabalaga as Chelsea's chance of a first clean sheet this season came to an end.

It was nearly a grandstand finish when Wolves added another in the 85th minute. It was a deserved goal for Cutrone, who excelled after coming on at half-time, as he fired a volley home at close range after Arrizabalaga had initially saved Matt Doherty's shot.

But it was not enough to inspire a comeback as Chelsea sealed the victory with the last kick of the game. It was a no-look pass from Michy Batshuyai that picked out Mount down the left, with the 20-year-old setting himself up well before curling a shot around Vallejo and into the back of the net.

Chelsea manager Frank Lampard: "Tammy is [looking the part] and that's work, having gone out on loan and scoring a lot of goals in the Championship, having a year in the Premier League and now I think he feels the responsibility of the Chelsea shirt as he should. The last three games speak for themselves. "The only challenge for Tammy now is can he keep doing it? Can he get better and better because the way he's playing, he's a huge threat for us up front and there is competition within from [Olivier] Giroud and [Michy] Batshuayi so he needs to keep it at that level and get even better.

Wolves manager Nuno Espirito Santo: "It was a bad performance. We started the game well, pressing and creating good moments. The game changed with a goal, everything becomes harder and the team lost a little bit of concentration. 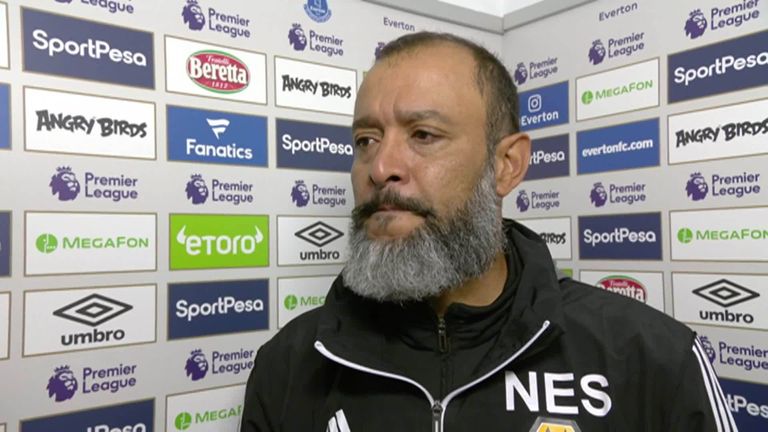 "Today we were beaten, Chelsea were better than us and we have to recognise that, congratulate Chelsea and move forward. Bad games can happen, but what is important is that we cannot repeat them. We have to react and become better."

Man of the match - Tammy Abraham Tammy Abraham became the youngest Chelsea player to score a Premier League hat-trick as the Blues beat Wolves 5-2 at Molineux.

Who else? He scored four goals - three for the right team - and could have added more for Chelsea as the game went on. His positioning and finishing inside the area was top class and he is going a very long way to proving that he can be the main man for Chelsea during their transfer ban.

He contributed at the back too and made a few good clearances to keep Wolves from scoring, even picking up a yellow card for a foul. His own goal was unfortunate and there wasn't too much he could have done about it, but luckily, it was not completely detrimental to the final result.

Ultimately, Abraham is a young man full of confidence at the moment which is wonderful for Chelsea, Frank Lampard and England. Surely Gareth Southgate cannot ignore him when the October internationals come around.

Both teams get their European campaigns under way this week. Wolves host Braga in their first Europa League group game on Thursday (8pm kick-off) before travelling to Crystal Palace next Sunday in the Premier League.

Chelsea are also at home in their Champions League opener against Valencia (8pm kick-off) on Tuesday before welcoming Liverpool to Stamford Bridge on Sunday 22 September, live on Sky Sports (4.30pm kick-off).