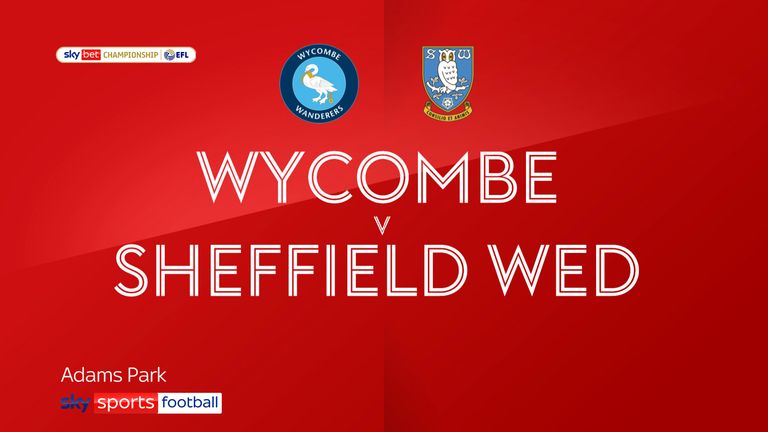 The midfielder headed home on the stroke of half-time to leave Garry Monk's Owls - who started the season with a 12-point deduction - without a win in four matches and stranded at the bottom of the table on -4 points after nine games.

Wycombe boss Ainsworth was watching the game from a hospital after undergoing back surgery on Friday, but assistant manager Richard Dobson oversaw a brilliant second-half defensive display to repel the lacklustre visitors and kickstart their maiden campaign in the second tier.

The Chairboys dominated the early stages after picking up their first point of the season against Watford in midweek and began to show signs of the organisation and team spirit that brought them a promotion from League One last season.

First Joe Jacobson whipped in a free-kick from the right that was glanced away by Callum Paterson, before Dominic Iorfa's brilliant last-ditch intervention stopped Scott Kashket.

The visitors found some rhythm with Adam Reach flashing a low ball across the Wycombe goal that somehow evaded the waiting Paterson.

Former Wycombe youngster Kadeem Harris then had the ball in the net for Wednesday but the flag was already up for offside.

Wycombe retained the upper hand, with a sliding Joey Pelupessy denying Adebayo Akinfenwa a tap-in after excellent work from Daryl Horgan and Kashket in the build-up.

From the resulting corner, only a desperate defensive block prevented Josh Knight's volley flying into the net.

The chances kept coming for both sides as Jacobson diverted Reach's dangerous cross behind before the wing-back slashed a volley wide and with half-time approaching, Ryan Allsop had to be at full stretch to keep out Paterson's effort from the edge of the area.

In added time, Jacobsen cut the ball back for Horgan but Joe Wildsmith was down quickly to push the ball away.

Jacobsen swung the resulting corner into the near post where Wheeler was on hand to flick home emphatically past a stranded Wildsmith.

Wednesday started the second period strongly but found Josh Knight and Anthony Stewart in resilient form at the heart of the home defence.

The hosts still posed a threat going forward and could have doubled the lead as Jack Grimmer launched a lightning counter-attack which ended with Kashket drawing a fine save from Wildsmith.

Gradually the Owls forced the hosts deeper as they pushed for an equaliser, forcing a succession of corners and dominating possession but unable to produce a telling moment.

Substitute Jordan Rhodes, who boasts 10 goals in six games against Wycombe, was introduced by Monk in a bid to conjure some magic but struggled to influence proceedings.

Deep into stoppage time, Paterson brought another flying stop from Allsop to preserve a clean sheet and seal a vital first league victory for the hosts.

Wycombe assistant Richard Dobson: "It is not about spirit, it is about anger. The boys were angry and they wanted to put something right.

"We have had a lot of big game-changing decisions go against us and that has fuelled the fire a bit. It has been tough to take some of these big decisions but it has added to the spirit.

"Gareth told me I was in charge during the game and left me to make the decisions. He was the first phone call and we have a very happy guy in hospital at the moment, he is over the moon.

Wednesday's Garry Monk: "We ran our hearts out today, which we knew we had to do.