Aston Villa took a giant leap towards Premier League safety as Trezeguet's goal took them out of the bottom three with a vital 1-0 win over Arsenal at Villa Park.

Villa were boosted before kick-off by relegation rivals Watford's 4-0 defeat by Manchester City, and the positivity continued as Trezeguet scored his third goal in three games, lashing home at the far post from a corner (27).

Sub Keinan Davis had a golden chance to double Villa's lead in the second half, slipping the ball wide from an angle, moments before Eddie Nketiah headed onto the post from a corner as Villa's lead hung by a thread.

Villa clung on for their first win over Arsenal at Villa Park since 1998, with the Gunners failing to register a shot on target in the entire game.

Relegation and European picture: As it stands

The result means Villa (GD -26) are out of the relegation zone, sitting level on points with 18th-placed Watford (GD -27), but with a one-goal advantage. Bournemouth (GD -27) are 19th, three points further back.

Villa go to West Ham in their final game on Sunday at 4pm, Watford go to Arsenal, and Bournemouth are at Everton.

Arsenal now cannot finish seventh in the final Europa League spot, sitting five points behind Tottenham with one game remaining. They can however qualify if they win the FA Cup against Chelsea on August 1, which would rob Tottenham of their spot in Europe if they finish seventh.

Watford's heavy defeat by City at Vicarage Road meant any win for Villa would bring them out of the relegation zone going into the final game of the season, but they opted for a more conservative approach against Mikel Arteta's FA Cup finalists.

Arsenal fans made their feelings clear to owner Stan Kroenke with concerns over the upcoming transfer budget, flying a banner over Villa Park reading 'Back Arteta Kroenke Out.'

There was more reason for concern among Gunners fans as they conceded from another set-piece. Conor Hourihane's corner was flicked on at the near post by Tyrone Mings, and Trezeguet was on hand 12 yards out at the back post to fire a fine low shot into the bottom-right corner. 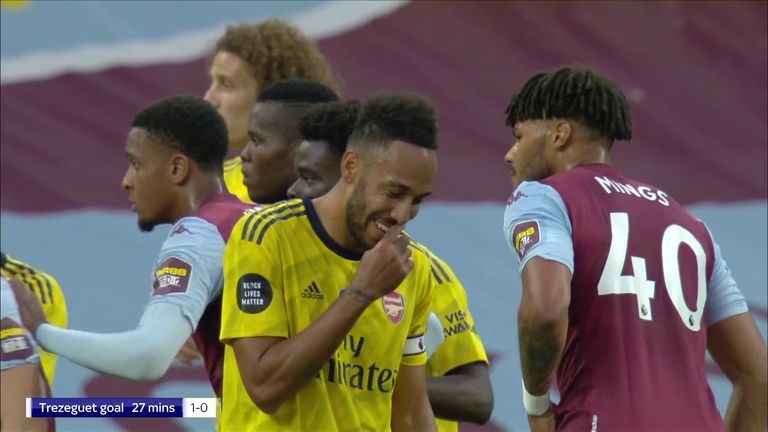 Arsenal looked to respond immediately, but Dani Ceballos blazed over from a Cedric Soares free-kick, before, at the other end, Jack Grealish fired just high and wide from the edge of the box.

Villa, sitting outside the bottom three for the first time since before lockdown, were understandably nervy and retreated slightly after the break, as Bukayo Saka snatched at an effort at the far post, sending it over the bar.

Villa were completely unchanged from their 1-1 draw at Everton. Despite Hause returning, Elmohamady stayed right-back, with Konsa staying in the middle.

There was no room in the matchday squad for Ozil or Guendouzi.

Moments after coming on, Davis was slipped through by Grealish at an angle in front of Emiliano Martinez, but the young striker could not find the far post, slipping inches wide.

Just seconds later he was almost punished as Nketiah headed against the post from a Granit Xhaka corner, and the ball fortuitously bounced into the grateful hands of Pepe Reina.

John McGinn stung the hands of Martinez after more good work from Grealish, and, despite an inevitably nervy final few minutes, Villa held on for their biggest win and most resolute performance of the season at the best possible time.

It means Sunday's final day is in their own hands, more than they could have hoped for when the picture was dour just 10 days ago.

Villa boss Dean Smith: "It was a great performance but an even better result. We knew we had to show a lot of courage, heart and work-rate and we did that. I can't remember our 'keeper making saves. We'd love to have had our fans getting us over the line but you could hear enough from the non-playing staff to do that. 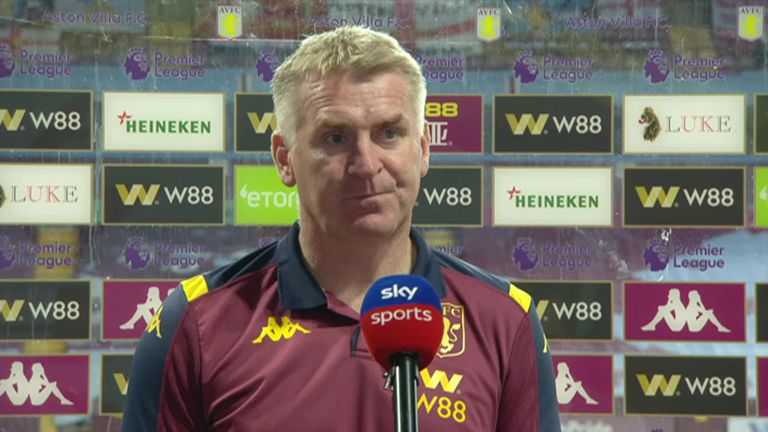 "We've been much better defensively over these eight games. We wanted to be better and the players were engaged with the video sessions we did [during lockdown]. We needed this. We've got to go and do the same against West Ham on Sunday.

"It's a big boost, that's for sure. We knew we had to win to catch Watford up. Now we've got the season in our own hands and that's all you can ask for. Watford can go and win at Arsenal so we have to make sure we win at West Ham."

Arsenal boss Mikel Arteta: "Congratulations to Villa because they were put under a lot of pressure and they managed to win the game. We were in some really good positions but we didn't manage to deliver the ball.

"Emotionally and physically it's been a very demanding week but I saw a team who wanted to fight until the end. I'm not disappointed about the attitude. I know where we are in certain areas and where we need to improve more. We will get that." Mikel Arteta reacts to Arsenal's defeat after the game

On finishing outside of the top six for the first time in 25 years: "It tells you the gap doesn't lie. We have to make that smaller and smaller."

On the "Back Arteta, Kroenke Out" banner: "The Kroenkes and the board and the sporting director, I have their full backing. I have that 100 per cent - the fans have to believe what I'm saying."

Speaking to Sky Sports after the game Villa's man of the match Jack Grealish was asked if this was his last home game for the club...

"I'm not too sure at the moment. I have one aim and that's to keep this club in the Premier League where this stadium, this club and fanbase know where we belong. "That's all I'm thinking about at the moment, keeping this club in the Premier League and hopefully we can do that on Sunday."