Free highlights and match report as Aston Villa see off Everton at Villa Park despite a late scare. This was the first win of the season for Steven Gerrard's side, while Frank Lampard is still waiting for his team to pick up their first points of the campaign 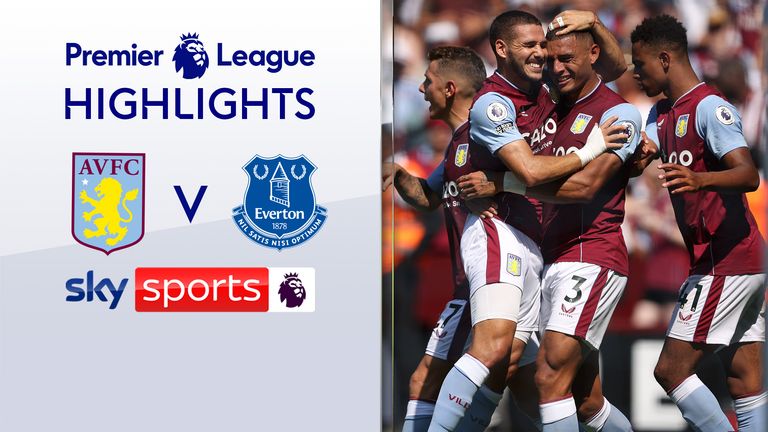 Goals from Danny Ings and Emiliano Buendia secured a 2-1 win for Aston Villa over Everton as Steven Gerrard got the better of Frank Lampard at Villa Park.

The game looked over when substitute Buendia added to Ings' first half strike late on but Lucas Digne's own goal made for a nervy finish in the afternoon sunshine with Amadou Onana coming close to bundling in a shock equaliser for Everton in stoppage time.

The two former England midfielders had both seen their teams lose on the opening weekend but, meeting each other as managers for the first time in the most played fixture in English football history, it was Gerrard who got the big decisions right on the day.

The recalled Ollie Watkins did brilliantly to set up both Aston Villa goals, while former captain Tyrone Mings produced a strong performance at the back to nullify Everton's threat. In contrast, Everton looked a little disorganised despite the arrival of Conor Coady and remain pointless this season.

Villa looked the brighter team from the start with Everton's vulnerability evident when centre-back Diego Carlos went close with an early headed chance from a corner. But Lampard's side did think they had the lead themselves midway through the first half.

Anthony Gordon bundled the ball into the net from close range after James Tarkowski had won the initial header from a right-wing corner but the youngster was offside. Everton were unable to build any momentum because they fell behind soon afterwards.

There were groans inside the stadium when Ings latched onto Watkins' centre because the home supporters could see that Philippe Coutinho was racing to meet the ball. Fortunately for Villa, Ings had the time, the space and composure to lash home on the turn.

Everton were just a little too easy to play against. Even when they had possession in the Villa half any stray pass left them exposed to the counter-attack, particularly after Abdoulaye Doucoure's injury left Alex Iwobi as the ostensible holding midfielder.

There were opportunities but when Dwight McNeil needed to find the pass he overhit it and when Demarai Gray needed to control the ball inside the box it escaped him. The rest of the time there was the sight of the recalled Tyrone Mings reaching the ball before them.

The second goal looked to have finished it as a contest when debutant Amadou Onana was dispossessed in midfield and Buendia played a one-two with Watkins to score a really neat goal. The Argentine made a real difference after he came on and seemed to enjoy himself.

The Villa fans were in a celebratory mood at that point but better work from Onana allowed Everton to pull a goal back when Digne put the ball through his own net. It was a nervy finish as both Salomon Rondon and Onana came close to finding an equaliser in stoppage time.

But the goal would not come and it is hard to see how they will come unless Everton can come up with something in the transfer market this month. Villa are entitled to be the more optimistic, the issues at Bournemouth addressed by Gerrard's team selection.

Gerrard: 'One of our strongest performances'

"I think it was one of the strongest performances [since I came to the club] in terms of control and positional play," said Gerrard. "We had some nervy moments [at the end] because we lost our focus." It was very different to that defeat at Bournemouth.

"I thought we deserved that external criticism, the level of performance was not where it should be but what we did was stay calm. We asked the players to deliver a response and I think we got that. The fans were fantastic and you saw the response from the team."

The decision to recall Watkins to the team was rewarded with an impressive performance as he set up both Villa goals. "He epitomised everything about us. Last week we did not put anywhere near enough pressure on the Bournemouth defence. Ollie was outstanding."

Gerrard also clarified the situation with Mings, back in the team and back on form with a fine display in defence. "He has not been stripped of his place, he was injured last week and wasn't 100 per cent so we went a different way," the Villa boss explained.

"There has not been as much focus and attention outside the building but I understand when you make a decision there is a lot of noise. I thought he was really good for a large part of the game, really dominant. He played his part in an important win for us."

Gerrard is more concerned about Mings' partner in the centre of defence after Carlos went off with an injury late in the game. "It doesn't look good," he revealed.

"That might tarnish the win if we lose someone who is that important to us. It is around by the ankle area. He has felt an uncomfortable mechanism there. He is not the type of man to go off easily. He looks concerned, the medical staff are concerned."

Lampard: 'We can improve'

"I thought there was some good and some bad to the performance," said Lampard in his press conference after the game.

"It was a pretty even game apart from the transitional goals. The overriding feeling is that we shouldn't lose as we created two or three good chances at the end. It is a shame we have not picked up something from first two games."

Lampard is without Dominic Calvert-Lewin through injury and having opted to leave Rondon on the bench, he went into the game without an out-and-out striker. "The feeling that we are going to score goals is not there," he said of the youngsters who are deputising.

Lampard also hopes that the new signings can make a difference. "Conor was very good. His experience we know, his quality we know. I am really pleased with him."

Onana was also praised despite being dispossessed in the build-up to Villa's second goal. "I have no problem with the goal because I want players who can receive the ball," added Lampard.

"Some teams have made moves in June or May, it was not that simple for us. James Tarkowski came in early and I think you can see that in his performance. The reality when you bring players in is that maybe there is five per cent [missing], the little details. Maybe we would have two points now but I am seeing things that we can improve.

"Last season is gone, now we need to move on. There are lots of moving parts for us, the quicker we can get the stability in the squad the better, but that is just daily work for us from now on."

Aston Villa take on Crystal Palace at Selhurst Park next Saturday in a 3pm kick-off. Everton are back in action at Goodison Park at the same time as they host newly-promoted Nottingham Forest in a classic top-flight fixture that has not yet been played this century.