FREE TO WATCH: Highlights from Aston Villa's win over Liverpool in the Premier League.

Aston Villa hit seven goals past champions Liverpool as they emphatically made it three wins from three in the Premier League with a stunning 7-2 victory at Villa Park.

Ollie Watkins' perfect hat-trick and John McGinn's deflected volley left Jurgen Klopp and his side, who scored through Mohamed Salah's 100th goal in English football, stunned and 4-1 down at the break, and it could have been more had Ross Barkley converted any of his three golden opportunities.

Dean Smith's side continued to cut through a shell-shocked Liverpool in the second half as deflected goals from Barkley and Jack Grealish further extended their lead.

Klopp's side did net another goal, again from Salah, but it was the hosts who completed the scoring, on what was a magical evening, as captain Grealish added a seventh.

It is the first time Liverpool, who produced "one of the worst defensive performances I've ever seen!", according to Sky Sports' Jamie Carragher, have conceded seven goals since a 7-2 league defeat at Tottenham in April 1963. They are down to fifth after their own perfect start to the season was ended in remarkable fashion.

Meanwhile, Villa, who have a game in hand, are up to second in the table on goal difference as we move into the international break.

How Villa embarrassed the champions

Villa took the lead in the fourth minute and they never looked back.

Grealish pounced upon Adrian's poor pass before squaring to Watkins, who had a simple finish for his first Premier League goal.

He did not have to wait too long for his second and it was one to remember as the club-record signing cut inside Joe Gomez and fired a right-footed shot past Adrian into the top corner.

It could have been even worse for Liverpool as Villa continued to cut them to shreds, exploiting their high defensive line, but Barkley missed two glorious chances with the goal at his mercy.

Liverpool did eventually pull a goal back through Salah's exquisite 33rd-minute finish, but the expected comeback from the champions never materialised.

Smith's side continued to take the game to Liverpool, and they restored their two-goal advantage when McGinn's volley went in via deflection off Virgil van Dijk.

And then Watkins remarkably completed a perfect first half hat-trick, heading home from Trezeguet's cross to make it 4-1 at the break.

Klopp threw on Takumi Minamino in place of Naby Keita as he tried to get some sort of grip on the game, but they could not cope with the attacking threat of Villa.

Barkley finally got his debut goal in the 55th minute, hitting a shot from outside the box that flew off the boot of Trent Alexander-Arnold and past Adrian.

Salah then grabbed his second of the game with 30 minutes remaining, but it proved only to be a consolation as Villa restored their four-goal cushion six minutes later with Grealish benefiting from another deflection off Fabinho to find the bottom corner.

Grealish then put the exclamation mark on what was an incredible night at Villa Park, grabbing his second of the night as Villa beat the Liverpool offside trap yet again. The Villa captain raced onto McGinn's through ball before calmly beating Adrian to cap a unbelievable night for his side.

Van Dijk: We must all take responsibility

Liverpool defender Virgil van Dijk to Sky Sports: "It's hard to lose the way we have lost tonight.

"First and foremost, well done to Aston Villa. You have to give them the credit they deserve.

"But we are looking at ourselves, it just felt like one of those performances where we just weren't 100 per cent at it from the start until the finish.

"It's key to not get crazy or anything but we have to be stepping it up. The performance level between the last game against Arsenal in the league and today was too big. All of us, everyone, has to take responsibility." 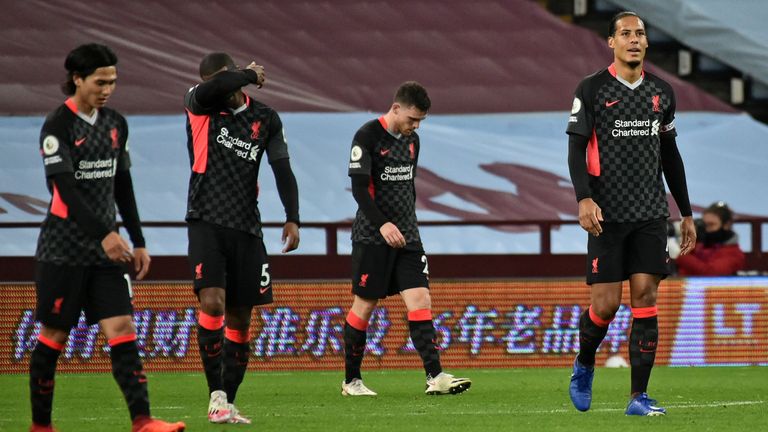 Jamie Carragher has criticised Liverpool's persistence at playing a high defensive line in the 7-2 defeat to Aston Villa in the Premier League. 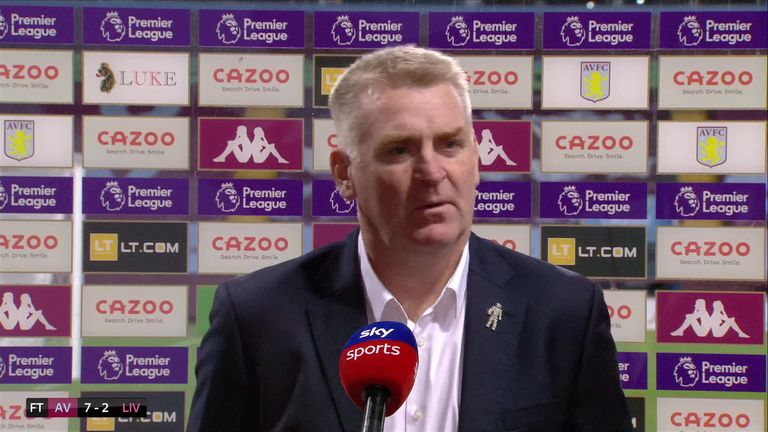 Aston Villa's Dean Smith credited his players work rate and quality on the ball for their incredible win over Liverpool.

Aston Villa boss Dean Smith: "It was sheer hard work and quality within the team. When Jurgen Klopp says 'Wow!' to you at the end you know you've done well.

"The players executed the game plan against an exceptional team."

Liverpool boss Jurgen Klopp: "I saw a game in which for different reasons Aston Villa did really well and forced all the mistakes we made, and then the game has a specific direction. 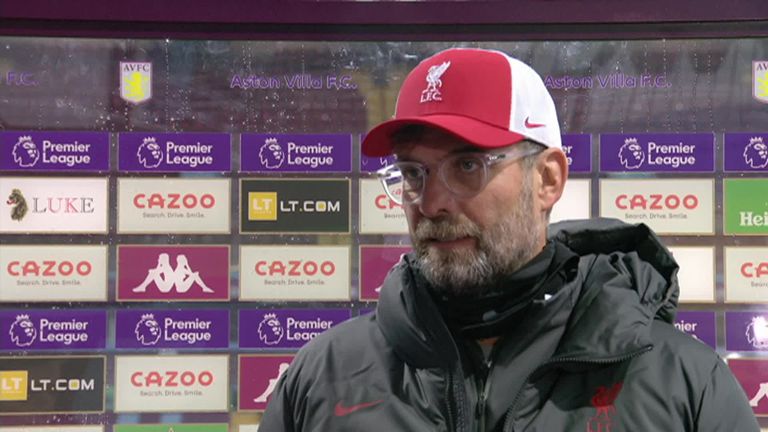 Liverpool's Jurgen Klopp credits Aston Villa for forcing mistakes but admits his side lost the plot during their 7-2 defeat.

"The first goal had an impact, but it shouldn't. Adrian made a mistake for the first goal, but we conceded goals like this in the past.

"The reaction was then, we lost kind of the plot. Our creating was really good, but we did not score. We still had good moments, but those good moments pretty much led to nothing, and their good moments led to big chances or a goal."

Man of the Match - Ollie Watkins

Villa boss Smith on Watkins' performance: "I think there were eyebrows raised over the fee when we brought him from the Championship, but that's doubled now at least. He's a tremendous talent and we've added quality to what I believe was a good strong team anyway."

Watkins admitted it was difficult to comprehend scoring a hat-trick against Liverpool.

"I think when the first one went in, I pinched myself a little bit as it was so early on. I'm just delighted I could contribute, and we won," he told Sky Sports.

"It's unbelievable, before the game I wouldn't think I'd score three goals. But I got a bit of confidence and I should have scored more in the end.

"The game plan was to get in behind them. We fancied ourselves but we didn't think the scoreline would be that."

After the international break, Liverpool travel to Premier League leaders Everton for the Merseyside derby at 12.30pm on October 17. On the same day, Aston Villa travel to Leicester City at 3pm.