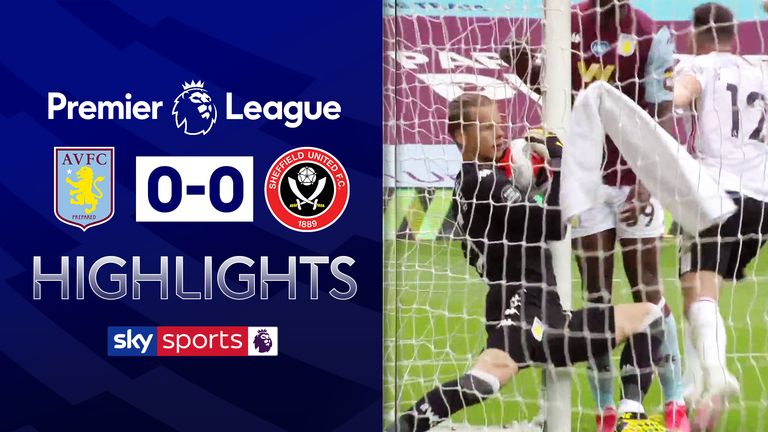 FREE TO WATCH: Highlights from the 0-0 draw between Aston Villa and Sheffield United in the Premier League

Sheffield United were denied by a bizarre goal-line technology error in their 0-0 draw at Aston Villa as the Premier League returned in highly controversial fashion following a 100-day absence.

The visitors should have been ahead going into half-time as Oliver Norwood's deep free-kick was fumbled over the line by Villa goalkeeper Orjan Nyland, but the usually faultless goal-line technology did not alert referee Michael Oliver, to the bemusement of all watching at Villa Park and at home.

Players, staff and officials unexpectedly took a knee just after kick-off to show support for the Black Lives Matter movement, before Sheffield United were denied their opener.

Villa had the better of chances in both halves, however, with Dean Henderson keeping Keinan Davis out well twice, and also tipping away John McGinn's fierce effort from the edge.

But it ended goalless, meaning Villa remain in 19th, now a point off safety, while Sheffield United move up to sixth, four points off the top four.

How technology error stole the headlines

For the first time since Villa's 4-0 defeat at Leicester on March 8, the Premier League kicked off at an eerily empty Villa Park, with football back to provide a welcome distraction in the wake of the coronavirus pandemic.

Wearing 'Black Lives Matter' on the back of their shirts instead of their names, all players, along with coaches and officials, took a knee just after kick-off, a powerful image of unification after recent events. Dean Smith and his assistant coaches took a pew higher up behind the dugout, and they'll have liked what they saw early from their new vantage point on as Villa came out brightest; Conor Hourihane's half volley was beaten away by Henderson, before Davis headed over the bar at close range after leaping over Sander Berge.

VAR has received much criticism this season, but this time it was the supposedly watertight goal-line technology that caused an unusual moment of controversy before the break.

Norwood's deep delivery from wide caused issues for Nyland, who failed to grasp the ball properly, colliding with team-mate Davis and falling into his side-netting inside the goal. The goalkeeper did his best to keep the ball on the line, and though replays conclusively showed it was over, referee Oliver's goal-line technology watch did not vibrate.

During the first half of Aston Villa vs Sheffield United match at Villa Park, there was a goal-line incident where the ball was carried over the line by Aston Villa goalkeeper, No 25 Nyland.

The match officials did not receive a signal to the watch nor earpiece as per the Goal Decision System (GDS) protocol. The seven cameras located in the stands around the goal area were significantly occluded by the goalkeeper, defender, and goalpost. This level of occlusion has never been seen before in over 9,000 matches that the Hawk-Eye Goal Line Technology system has been in operation.

The system was tested and proved functional prior to the start of the match accordance with the IFAB Laws of The Game and confirmed as working by the match officials. The system has remained functional throughout. Hawk-Eye unreservedly apologises to the Premier League, Sheffield United, and everyone affected by this incident.

It is the first time the GDS (Goal-line decision system) has failed since its introduction to the Premier League in 2013, and Hawk-Eye apologised after the game, stating the incident saw the highest "level of occlusion" in over 9,000 games where GDS has been used.

Under the IFAB protocol, the VAR is able to check goal situations, however due to the fact that the on-field match officials did not receive a signal, and the unique nature of that, the VAR did not intervene.

Villa continued to create chances after the break as Davis caused more problems for the Sheffield United defence; he first forced Henderson into a fine save at a tight angle from eight yards, before coming within inches of Anwar El Ghazi's centre. McGinn, back after a breaking his ankle in December, also stung the hands of Henderson with a whipped effort from the edge of the box.

The game petered out as both sides struggled to create chances for a winner, but even after a 15-week absence, technology stole the headlines again. Football is back, not quite how we knew it, but with the same contentious talking points.

The game itself was not a memorable one for the right reasons with no goals given thanks to one huge error. That mistake will linger but while this match was far from a classic, at least the tempo of the contest was encouraging. Aston Villa covered 111.60 kilometres while Sheffield United ran 113.58 kilometres at Villa Park - which is actually above average for the Blades this season. This was no practice match.

Aston Villa boss Dean Smith: "We deserved a victory tonight. I know they've scored a goal that isn't given because of technology, but we did enough to score tonight. I feel for them, but I've had technology go against me, and we're probably due that little bit of luck. 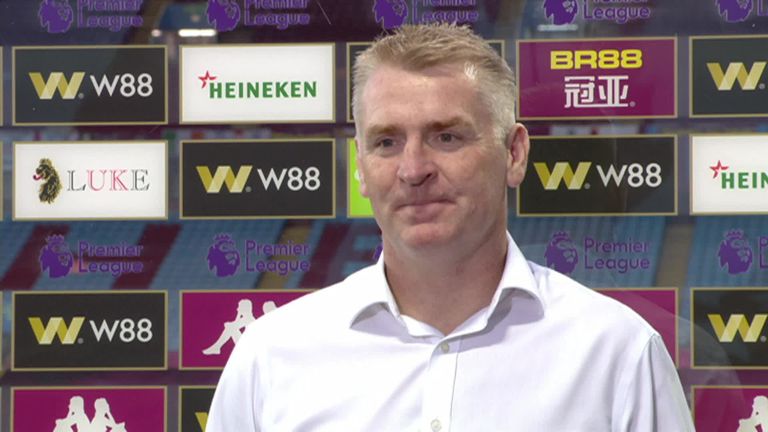 "It was difficult, you don't know what to expect, because it's new. But once the game kicks off, you're into it."

Sheffield United boss Chris Wilder: "The statement's come out, unprecedented, unbelievable. That's the balance. We were waiting for somebody, I don't know who it was at Stockley Park, to show a bit of courage, stick their chest out and say I'll make that decision. But if they say they haven't seen it, and seven cameras haven't seen it, I suppose he's going to say he can't make that decision. 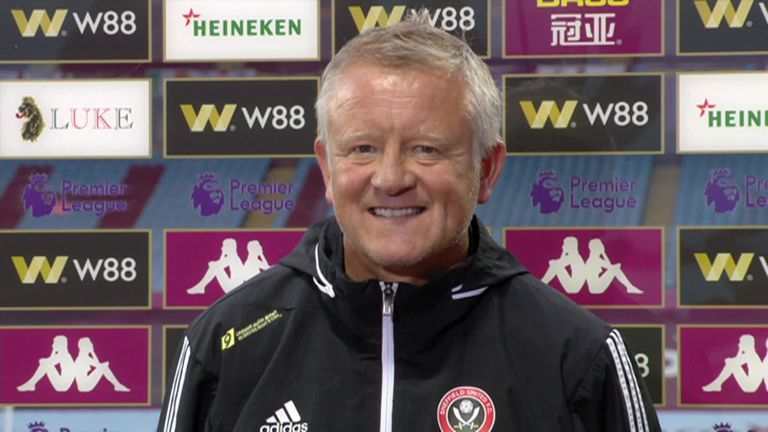 Sheffield United manager Chris Wilder admits he's frustrated that an error by the goal-line technology was not picked up by VAR.

"I think we all had the feel, both sets of players, fans and staff, I think even speaking to the referee and the fourth official, I think we all had the feel of a goal. You listen to the statement that's been given by Hawk Eye, my issue is one of frustration, seven cameras haven't picked it up, the most technical league in the world, video analysis and everything we see at every angle hasn't seen a goal. That's disappointing from our point of view.