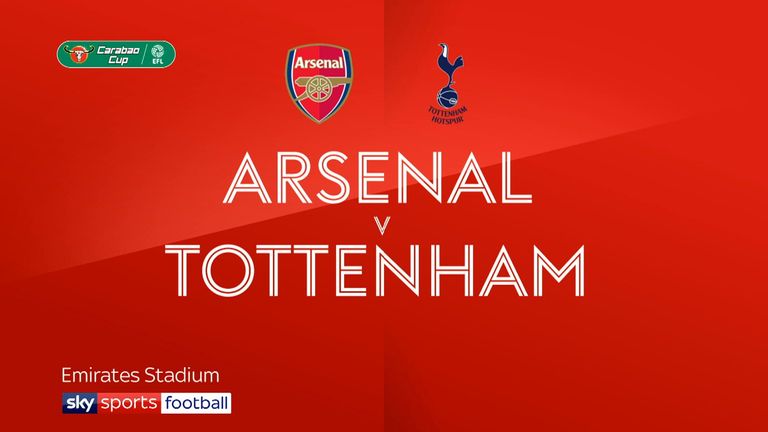 Highlights of the Carabao Cup quarter-final between Arsenal and Tottenham

Tottenham avenged their league defeat to Arsenal by booking their place in the Carabao Cup semi-finals with a 2-0 win at the Emirates.

Breakaway goals in either half from Heung-Min Son and Dele Alli sealed Spurs' second win away at Arsenal since 1993 as Mauricio Pochettino's side set up a two-legged semi-final with Chelsea.

Alli was struck by a plastic bottle thrown from the crowd shortly after doubling Tottenham's lead, with the England international gesturing the scoreline to Arsenal supporters in response.

Aaron Ramsey and Alexandre Lacazette struck the post with efforts but that was as close as the Gunners came as they slipped to back-to-back defeats for the first time since August.

Man of the Match: Dele Alli.

The Gunners started in similar fashion to their league victory over Spurs earlier in December, bombarding the visitors' goal with attempts early on.

Henrikh Mkhitaryan glanced wide from a corner inside two minutes, Ramsey missed the target a drilled shot six minutes later, and the Arsenal pair combined brilliantly on 12 minutes only for Paulo Gazzaniga to keep the Wales international's near-post effort out.

But against the run of play, Spurs took the lead. Gazzaniga's long punt sparked a counter as Alli gathered and released Son through on goal, and the South Korean showed great composure to finish into the far corner beyond Petr Cech.

Spurs should have had a second on the half hour as Christian Eriksen and Moussa Sissoko combined on the counter, but the Frenchman blazed over upon receiving the ball on the edge of the Arsenal area.

Arsenal threatened to draw level before half-time with a flurry of late chances. Pierre-Emerick Aubameyang charged down a Gazzaniga clearance, but, after Ben Davies failed to clear the danger, Ramsey's unnecessary back-heel was cut out.

Gazzaniga then pulled off a sunning save a point-blank range to tip a volley from Ramsey onto the post before Sokratis Papastathopoulos headed wide from a corner before the interval.

Lacazette and Kane were introduced on 58 minutes as both managers looked to turn the derby in their favour. But it was the Spurs striker that had an instant impact, controlling a clearance on halfway a minute after coming on and releasing Alli, who lofted home Spurs' second over the on-rushing Cech.

Arsenal sought an immediate response and almost got it as Aubameyang drove to the byline and cut the ball back for Lacazette, but his scuffed effort clipped the outside of the post.

But after Aubameyang saw a sliced cross hit the crossbar, little else materialised from the Arsenal attack as Spurs gave their fans some early Christmas cheer. 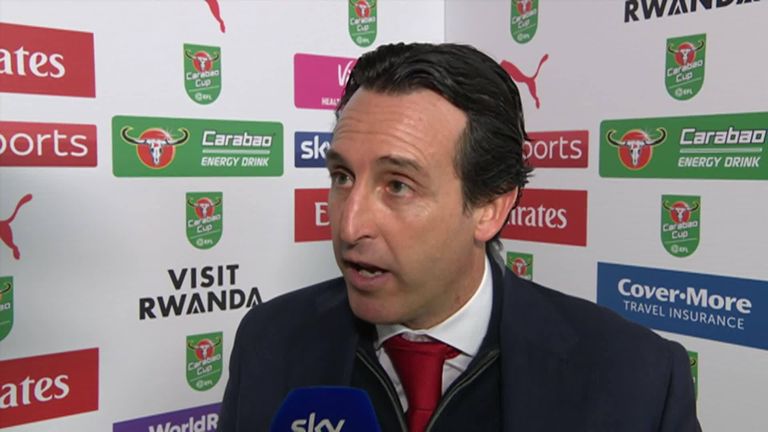 Unai Emery felt his side created more and better chances then Tottenham, but conceded Tottenham were knocked out of the Carabao Cup by their north London rivals

Unai Emery: "We were good in the first half but we needed to keep the ball and possession, but it was not easy because they pressed very well. We created chances to score but were not efficient. We worked for 90 minutes and we didn't take our chances, they scored theirs." 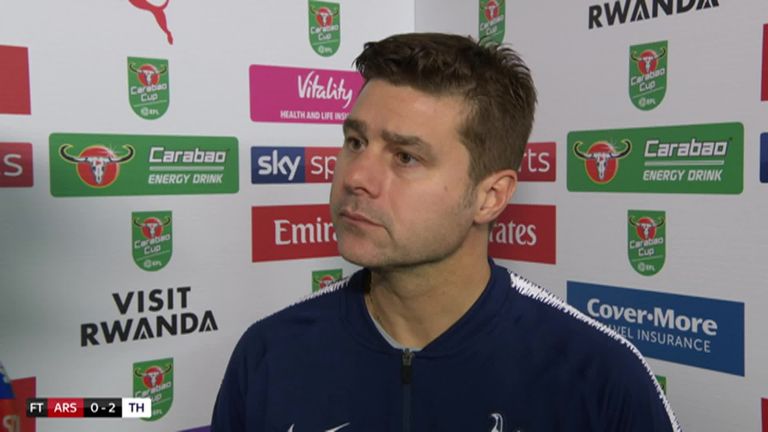 Mauricio Pochettino: "I am very pleased to qualify, that's the most important thing. We tried to play well, the performance is always important for us but to win the game is most important. Keeping a clean sheet after Barcelona, after a very busy period, is very good for us. The level of our fitness was excellent today."

Man of the Match - Dele Alli

After Spurs' defeat at Arsenal three weeks ago, Alli put smiles back on Tottenham faces with a match-winning display at the Emirates. The England international thrives in such a competitive environment and his rose to the occasion with an exquisite assist for Son's opener that was matched only by his lofted finish for Spurs' second.