Arsenal Women 2-1 Brighton Women: Beth Mead scores one and makes another as Gunners come from behind

Match report and free highlights as Beth Mead makes one goal and scores another in Arsenal's 2-1 comeback win over Brighton in the Women's Super League; Emma Koivisto heads Seagulls in front from early free-kick before Vivianne Miedema levels up 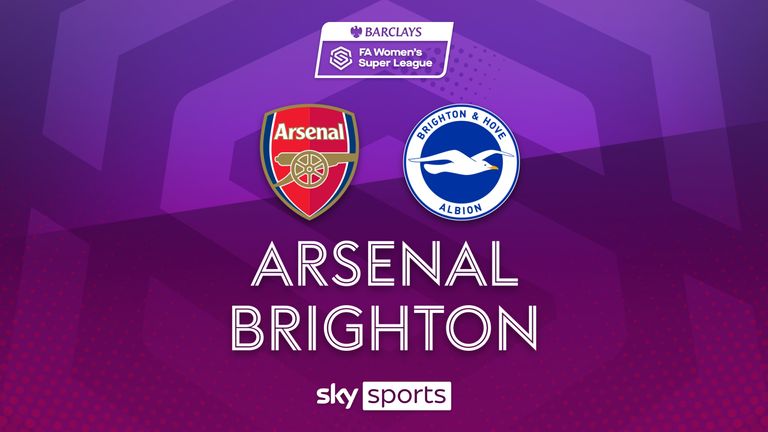 Highlights of the Women's Super League match between Arsenal and Brighton

Arsenal extended their WSL lead to four points after a Beth Mead-inspired comeback saw them beat Brighton 2-1 at Meadow Park.

The Gunners, who had lost and drawn their previous two games, were in danger of handing the initiative to second-placed Chelsea as their out-of-form visitors, who had not scored in more than 460 minutes, were nodded in front by Emma Koivisto from a 15th-minute free-kick. Beth Mead gives Arsenal the lead with a stunning free-kick

That would have opened the door for the Blues to wrestle the lead at the top of the WSL away from the Gunners, who looked short on confidence and largely devoid of ideas before half-time.

An unrecognisable second-half performance was rewarded 10 minutes after the break as Mead's free-kick was prodded home by Vivianne Miedema for a first goal since December 12, lifting the provider level with Karen Carney at the top of the all-time WSL assists charts. 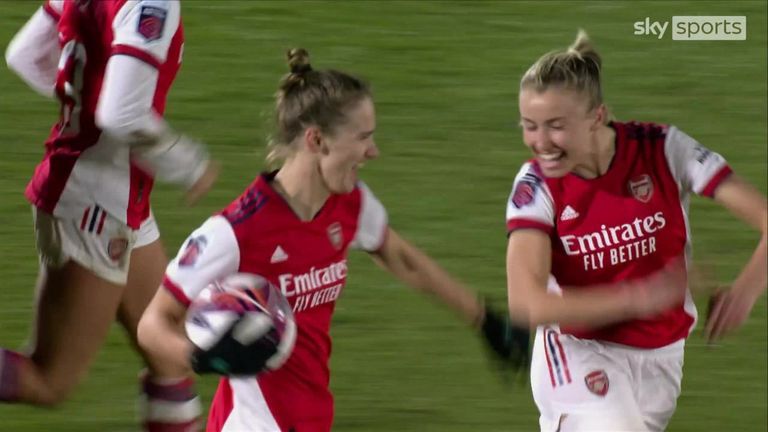 Vivianne Miedema equalises for Arsenal in their WSL match against Brighton

Five minutes later, another moment of Mead magic from a set-piece saw the Gunners in front as her curling free-kick into the far corner left Megan Walsh helpless.

Miedema threatened to add to the hosts' advantage, but ultimately the hosts were relieved to hear the final whistle - and move four points clear at the top of the WSL. 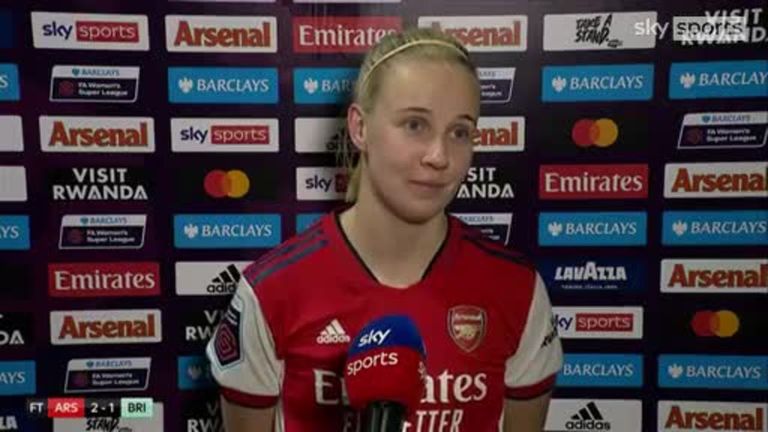 Arsenal's Beth Mead admits they were 'a different team' in the second half, after fighting back from a goal down to beat Brighton 2-1 in the WSL

Had Arsenal not upped their game from a performance met by jeers at the half-time whistle, they may well have ended up on the wrong side of a defeat for the second time in three games.

But their resurgence after an interval of soul-searching was as impressive as their performance had been dreadful to that point.

Mead led the way, coming close to bringing them level before winning the free-kick from which her cross was turned home by Miedema.

Another excellent run across Victoria Williams then brought her a second - which she dispatched expertly to seal the victory.

The hosts improved from back to front and looked like the Arsenal which started the season with such a bang for the second 45 minutes, but it needed Mead to get their attack truly firing - and make history for herself in the process.

EidevalI: We are building something 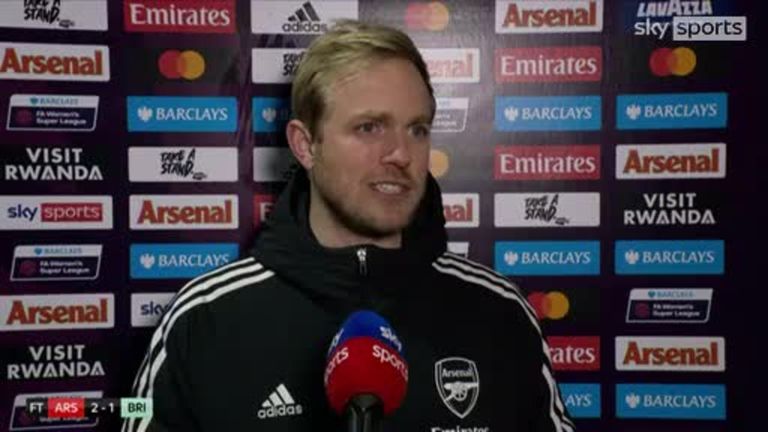 Jonas Eidevall felt the victory was another step on the ladder of an Arsenal resurgence since their dreadful defeat at Birmingham, even though this was their first win in three attempts since that point.

"It's important to see from the way we started against Birmingham, we've built from then," he told Sky Sports. "Even losing against Man Utd in the Conti Cup, City was another step, this was another step. We have something good coming.

"It's a difficult moment coming in 1-0 down, and so important focusing all the energies on things we can control and focus on.

"Half-time was nice, but the execution was even better from the players after half-time. It was a big moment for us, those moments are tough and it's about how you react. This time we won, but looking aside from the result, but even how we are performing when the result is against us is impressive."

Were Brighton unlucky with Arsenal second? 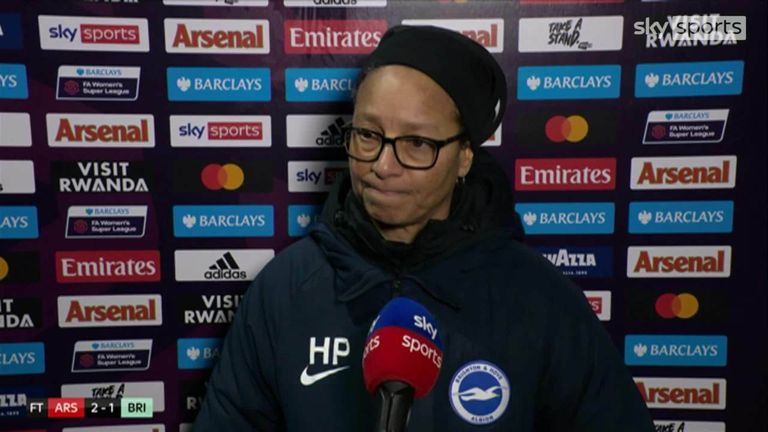 While Brighton boss Hope Powell was plenty satisfied with her players' work, she felt Brighton - now without a win in six games in the WSL - were unlucky not to see the Gunners' winner ruled out for an earlier foul.

She told Sky Sports: "It felt like we weren't getting the rub of the green tonight. Sometimes you're desperate, but it's really unfortunate tonight that some of the decisions we thought we should've had tonight - and one of them ended up being a goal for them.

"I think we can take some heart from tonight. The last two games we've played well against two top sides, so I'm really pleased. If we're looking at results we haven't done so well, but over the last two games I have been proud and pleased in the progression that we're making."

"There was pressure on the Gunners going into this and they knew they couldn't afford any slip ups if they want to win the league.

"After a lacklustre first half performance, Arsenal overwhelmed Brighton after the break. Speaking to manager Jonas Eidevall after the match he said Katie McCabe, who was suspended for this game, came in to do the half time team talk which spurred the players on.

"Viv Miedema's positioning was much improved in the second half, playing more centrally and further forward rather than dropping in to retrieve the ball.

"The win means Arsenal have regained their four point lead at the top of the table and got back to winning ways in the WSL. This was a crucial win for Arsenal's title charge, particularly as they have a potential title decider against Chelsea in two weeks time. "