Report and free match highlights from the Sky Bet Championship clash between Barnsley and Cardiff City at Oakwell; Steve Morison's Bluebirds ended a woeful run of 27 games in all competitions without a clean sheet Highlights of the Sky Bet Championship match between Barnsley and Cardiff City.

On-loan Cardiff substitute Uche Ikpeazu secured a 1-0 Championship victory at bottom side Barnsley, just eight minutes into his debut for the Welsh club.

The 26-year-old striker has only mustered three goals in 22 outings for parent club Middlesbrough this term, but he became an instant hit with Bluebirds fans when he tucked away a 71st-minute chance in a game of few clear-cut opportunities.

At the other end of the pitch, meanwhile, Cardiff ended a woeful run of 27 games in all competitions without a clean sheet. 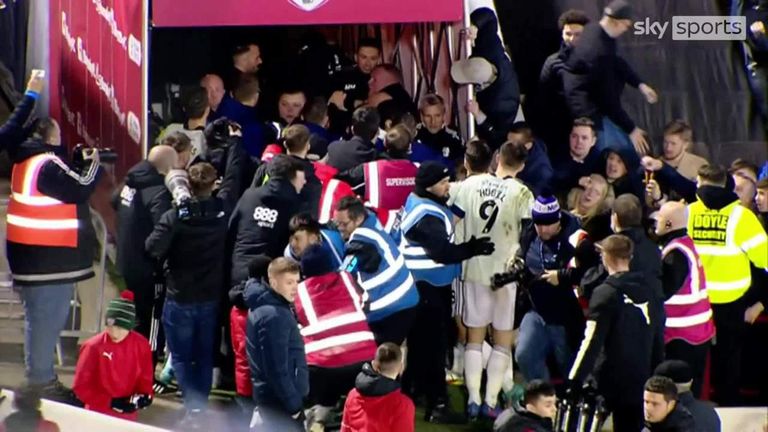 There was a melee in the tunnel after the full-time whistle was blown in Cardiff's 1-0 win against Barnsley.

Liverpool might be a tougher prospect to contain in the FA Cup on Sunday, however, than the Championship's lowest marksmen Barnsley.

The hosts did have the first chance of the night when Liam Kitching's searching ball into the box was only headed as far as Josh Benson by Mark McGuinness - and the home midfielder's firm 15-yard volley was well held by Cardiff goalkeeper Alex Smithies.

The visitors then lost skipper Sean Morrison to injury, while Tommy Doyle was wayward with two hopeful edge-of-the-box efforts either side of the quarter-hour mark.

The Tykes were posing a slightly greater first-half threat with Jordan Williams' side-footed volley across the face of goal palmed behind by Smithies following Domingos Quina's left-wing cross to the far post.

Devante Cole also blasted narrowly off target from the edge of the box and Kitching's header flashed wide after he rose unchallenged to meet Callum Styles' in-swinging corner on the stroke of half-time.

A drab start to the second period saw home boss Poya Asbaghi make the first decisive move from the bench when he introduced Carlton Morris from the bench just past the hour and away chief Steve Morison immediately responded by throwing on Ikpeazu.

After Kitching had aimed high and wide from 15 yards with the first second-half attempt on goal of any description after 70 minutes, Ikpeazu then became an instant Bluebirds favourite from the next attack of the game.

The 6ft 3in striker used all of his brawn to brush off the attentions of Barnsley skipper Mads Andersen and latch on to a long ball forward, before scuffing a 10-yard shot into an onrushing Brad Collins' bottom-right corner.

It was the Welsh side's only on-target effort of the evening and Ikpeazu celebrated by jumping into the jubilant away end.

Will Vaulks went close to doubling the lead with a thumping 20-yard volley before stoppage-time drama saw home substitute Aaron Leya Iseka head wide from a Claudio Gomes free-kick and then fire in, only to be denied by an offside flag.

The result represented a fifth-straight league defeat for the hosts, while it saw Cardiff pull a little further away from the relegation zone.

Barnsley's Poya Asbaghi: "It's great to see that level of intensity and feeling and you don't get it in other countries, but it has to stop at the final whistle. He's the coach of Cardiff and he's won a game 1-0, so you have to win with style and he said some not very nice things to us that I won't repeat, but my assistant reacted to it.

"The fine margins are not going in our favour, but I can't sit here and say we lost the game because of the referee. We conceded from the only chance they created and we shouldn't have done because we had the advantage in that situation."

Cardiff's Steve Morison: "The game wasn't a great spectacle - it was a horrible game and wasn't our finest performance, but he [Ikpeazu] had that one moment and he got to show how strong and powerful he is. He is hard to stop when he gets going and is a great kid who has come into the club with a smile on his face. He's brought a nice energy to the squad and the lads have told him he's got to go to the gym because he's not strong enough.

"They didn't like the fact that we beat them and I don't think they covered themselves in glory all night by hiding the towels on the side of the pitch and putting them up ballboys' jumpers when we were taking throw-ins. But karma came back and bit them on the backside. One member of their staff followed me down the tunnel, but he picked the wrong person and then the security got involved, but it was handbags really."