Report and highlights from the Sky Bet Championship clash between Barnsley and Coventry at Oakwell as Dominik Frieser's first half goal earned all three points for the Tykes against Mark Robins' men, who had a late penalty saved 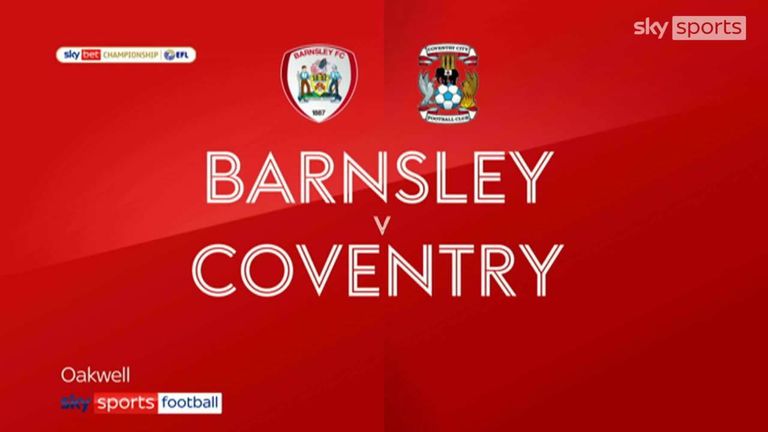 Markus Schopp recorded his first win as Barnsley head coach after Dominik Frieser's first-half goal gave them a 1-0 victory at home to Coventry.

Coventry had a number of good chances to equalise, including a stoppage-time penalty which Viktor Gyokeres failed to convert, as the Tykes held on.

Barnsley were strong in the opening exchanges, but Coventry responded with Gyokeres setting up Callum O'Hare who shot just wide.

O'Hare was then involved in the build-up which saw Coventry threaten again, setting Ian Maatsen free down the left and his cross just evaded Tyler Walker.

Taylor suffered a shoulder injury soon afterwards and had to be replaced in the 17th minute, making way for Martyn Waghorn.

The visitors went close in the 20th minute when Gustavo Hamer's free-kick picked out Kyle McFadzean, whose header went over the bar.

As Coventry continued to press, they hit the woodwork in the 26th minute. Ben Sheaf found Maatsen out wide and his ball into the area was met by Gyokeres, whose volley came back off the bar.

The hosts also made an enforced substitution with Carlton Morris going off to be replaced by Clarke Oduor.

Barnsley took the lead in the 39th minute, with Frieser finding the net with a shot from the right-hand side of the area after receiving the ball from Romal Palmer.

An effort from Michal Helik early in the second half went over following a corner and the hosts threatened again soon afterwards when Cauley Woodrow put a glancing header wide.

Coventry nearly equalised shortly before the hour-mark when Maatsen's corner found Michael Rose, whose header was cleared off the line by Woodrow.

The visitors went close again when Hamer's free-kick was well saved by Brad Collins, and another effort from the Sky Blues saw Hamer's shot from distance go over.

Jake Clarke-Salter came to Coventry's rescue when he made a great challenge to dispossess Odour in a dangerous position.

Coventry then won a penalty in stoppage time when Jamie Allen was brought down inside the area but Gyokeres' effort from the spot was saved by Collins.

Barnsley's Markus Schopp: "It's so important to start with three points in our first home game. Everything gets easier when you get some points on the table. To play at home with the home supporters makes it different and I'm so glad that we have three points. I'm so glad for Dominik that he scored. He gives us something we need.

"When you get a penalty five minutes from the end, it's always a tough one, but I guess it's a moment each goalkeeper is waiting for so that he can bring something to the team. To save a penalty five minutes from the end when the team is 1-0 up is a big thing. I'm happy for him. Coventry did play really well and we were struggling a bit. We take the three points but we know what we have to do better."

Coventry's Mark Robins: "I thought it was a good game, for a start. I thought they were two good, young teams. There was a lot of energy and I thought we dominated from start to finish. There was a really poor chance in the first half that ended up in the back of the net. Apart from that, they've done nothing.

"We didn't allow them to do anything in fairness. I thought we were outstanding in most areas. We have to take the chance from 12 yards and we have to be more clinical in that final third when we've got opportunities. Nobody likes losing but I've got to come away thinking there are loads of positives from it. We were playing against a team who were in the play-offs last season and I thought we were good all game."