Report and highlights from the Sky Bet Championship clash between Barnsley and Luton Town at Oakwell as Amari'i Bell's early first-half goal steered the Nathan Jones' Hatters to victory on Tuesday night. 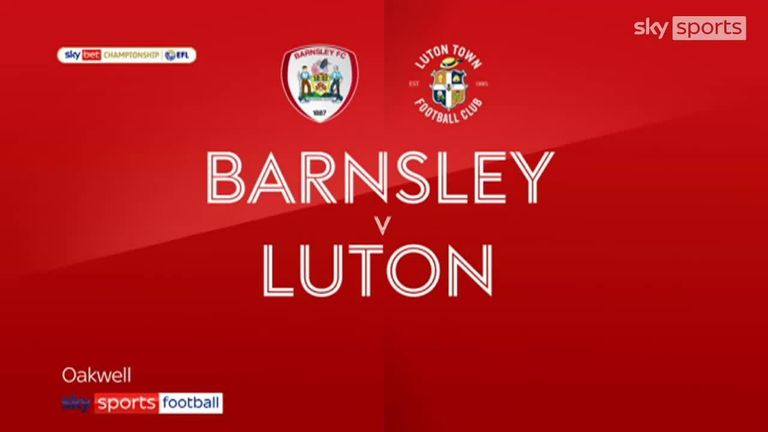 Highlights of the Sky Bet Championship match between Barnsley and Luton.

Jamaica international Bell ended his 58-game drought with less than four minutes on the clock and his effort proved enough as the Hatters secured a fifth victory from their last six visits to Oakwell.

Nathan Jones' men, who had conceded five goals in their previous two outings, went on to protect their lead admirably against a Barnsley team who made that task easier with a tepid performance in the final third.

The visitors forged in front from the first attack of the game when Elijah Adebayo raided down the right and, although Cameron Jerome mis-controlled his low cross, the ball fell to wing-back Bell, who fired inside goalkeeper Brad Collins' right-hand post from 12 yards with aplomb.

The Hatters continued to threaten during the opening stages and James Bree dragged a volleyed chance wide after Collins had been lured out of his goal by another positive burst for the byline from Adebayo.

Barnsley's first opportunity of the night came midway through the half, with Romal Palmer electing unsuccessfully to beat Simon Sluga at his near post when a ball across the six-yard box would have been the better option.

Moments later, Luton defender Tom Lockyer made a brilliant block challenge as Clarke Oduor pulled back his boot and prepared to shoot eight yards from goal.

At the other end, Admiral Muskwe muscled his way into two shooting positions in quick succession, but Michael Helik threw himself in front of the Zimbabwe international's first effort and Collins was equal to his second.

Luton then had to demonstrate their defensive resilience once more before the break when Sluga parried a firm Callum Brittain drive and Peter Kioso's sliding challenge prevented the home winger from having greater success after the rebound.

Brittain continued to probe and, early in the second half, drilled a diagonal 15-yard attempt across the face of the visitors' goal.

In response, Adebayo was wasteful when he tamely shot past Collins' near post after striding clear through the left channel.

Henri Lansbury was more decisive, though, with an edge-of-the-box strike that stung Collins' palms.

For Barnsley, Brittain sent an inviting low cross into the six-yard box from the right wing but none of his team-mates were able to apply a finishing touch.

Josh Benson also thumped over from 20 yards following Kal Naismith's headed clearance and Callum Styles forced Sluga into a save low to his right.

Liam Kitching headed too high from an inswinging Benson corner and Styles lifted a half-volleyed attempt over as time ran out for the Tykes.

Even with six minutes of stoppage time, Markus Schopp's men never looked like finding the quality needed to summon an equaliser and finished the night having only mustered two shots on target.

Barnsley's Markus Schlopp: "It was really disappointing. It was a tough game and we weren't clinical. They defended with intensity but we need to improve when we get in certain situations and have got to be better with certain details. It was a similar game to Saturday though.

"We beat Coventry 1-0 then, but everything wasn't perfect and, although we have lost this game 1-0, we didn't do everything badly. We know it's a long Championship season and I want all my options on the bench as soon as possible. Carlton (Morris) was a big miss for us, because he gives us that option to win the first ball and we also still need to get some fitness into the Belgian boys."

Luton's Nathan Jones: "This win was for big Mick. We know he started his treatment today and Mick's a big part of Luton Town. He has a relationship with everyone at the club and we're missing him but he knows the lads are there for him and it was a big win for him.

"Possession is possession. It's like having a lot of money - it doesn't mean anything if you don't spend it. At times you can allow teams to have possession, and I'd rather be sat here having had less possession and three points than a shed-load of possession and nothing. I'm also delighted for Amari'i because you want your wing-backs playing high up the pitch. I love winning 1-0 away from home. They're the best kind of wins and you never want back-to-back defeats."