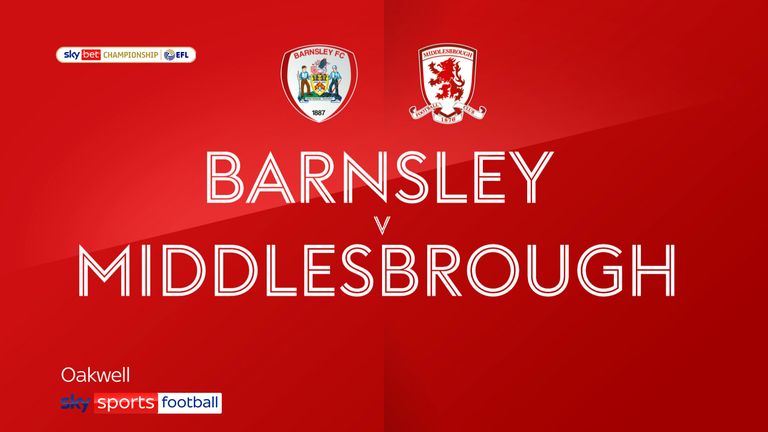 Highlights of the Sky Bet Championship match between Barnsley and Middlesbrough

Goals from Alex Mowatt and Daryl Dike strengthened Barnsley's play-off push in a 2-0 win over Middlesbrough at Oakwell.

Mowatt scored shortly after the hour mark before Dike made sure of the three points 15 minutes from time.

Barnsley sit fifth in the Sky Bet Championship and now hold a five-point advantage over Reading, who are just outside the play-off positions.

For Middlesbrough, it was a fourth consecutive away defeat.

Valerien Ismael made one change from the team who beat Luton on Monday as Dominik Frieser replaced Victor Adeboyejo.

Middlesbrough manager Neil Warnock, meanwhile, also made a single switch from the side who drew with Watford, as Chuba Akpom came in for the injured Sam Morsy.

The hosts started brightest in South Yorkshire, with Tykes front man Dike first to let loose on goal as he fired over Marcus Bettinelli's crossbar early on.

George Saville responded as he registered Boro's first chance of the afternoon. After failing to capitalise on Toby Sibbick's defensive error in the opening minutes, the midfielder caught the defender short at the back. Having intercepted a headed pass to goalkeeper Brad Collins, the Northern Irishman could not beat the goalkeeper from close range.

Barnsley's Cauley Woodrow then tried his luck with a volley that flew wide from inside Middlesbrough's penalty area midway through the first half.

Reds captain Mowatt was next to cause problems for the visitors, picking up the ball outside of the box and driving his effort high and wide.

Michal Helik forced Bettinelli to react quickly before the break. After claiming a deflected strike from the Barnsley centre-back, the shot-stopper wasted no time in getting down low to meet the ball.

Paddy McNair then threatened the Barnsley defence after the restart but the only reward for his rocketed shot through a sea of red was a corner.

Barnsley made a double change shortly before the hour mark, as Aapo Halme and Conor Chaplin replaced Romal Palmer and Woodrow.

Mowatt broke the deadlock directly from a corner in the 62nd minute, the skipper's cross finding its way into the back of the net as Bettinelli rushed out and missed the ball.

An immediate second very nearly followed for Barnsley when Callum Styles' volley from a set play was kept out by Bettinelli.

Dike scored a fifth goal in five games to double Barnsley's lead in the 75th minute, netting a diving header after latching on to Callum Brittain's pass.

The forward was then eager double his personal tally as Barnsley applied the pressure, but a subsequent shot was blocked as the match drew to a close.

Barnsley's Valerien Ismael: "At the end of the day, all that matters is getting the job done. The first half was a sleepy game without intensity. The opponent was very organised and tried to take the time from the clock. We didn't find a way to put the pressure on the opponent in the first half, but we were stable and we didn't concede any shots.

"In the second half we changed to have more impact on the front three. We controlled the second half completely and, as usual, set-pieces made the difference. It's very important that we scored the second goal in the right moment. It was our purpose to win the game because the next three points mean that you cross the 70-point line."

Middlesbrough's Neil Warnock: "If we took one of our chances then we would have won the game. The longer the game went on, you knew they were going to get something. What can you say about a goal like that (Mowatt's)?

"I've just apologised to Jonny Howson because I thought he was absolutely ma of the match. He covered every blade of grass and he didn't deserve to be on the losing side today. We need to improve the squad and today demonstrated where we need to improve."