Report and highlights from the Sky Bet Championship play-off semi-final first leg between Barnsley and Swansea at Oakwell as Andre Ayew's first-half goal handed the Swans the lead in the tie ahead of the second leg. 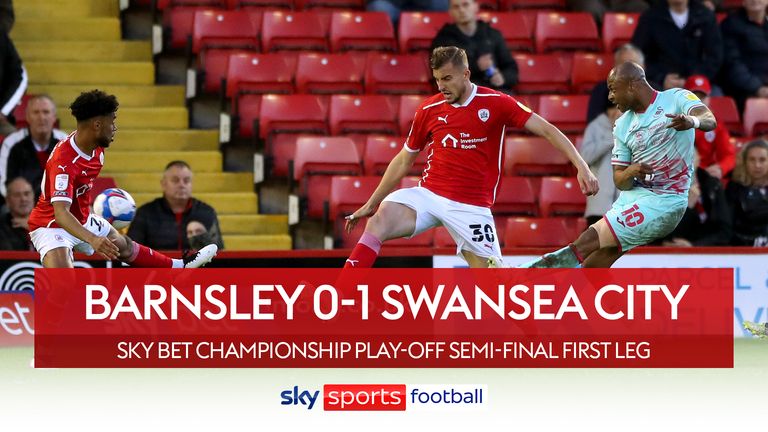 Highlights of the Sky Bet Championship play-off semi-final match between Barnsley and Swansea.

Andre Ayew’s moment of magic proved the difference as Swansea secured a 1-0 victory at Barnsley in the first leg of the Sky Bet Championship play-off semi-final.

In a fast and furious game, Ayew curled an inch-perfect effort beyond the dive of Bradley Collins to give the visitors the lead in the 39th minute.

Buoyed by the introduction of substitute Carlton Morris at half-time, Barnsley piled the pressure on Swansea, but it proved to be a frustrating night for the hosts as they found no way past Swansea goalkeeper Freddie Woodman.

Read all the best interviews, previews and stories ahead of the 2020/21 Sky Bet Championship, League One and League Two play-offs.

The result sees Steve Cooper's side head back to the Liberty Stadium for the second leg on May 22 with a slim advantage, while Barnsley are left with plenty to do if they are to keep their own Premier League dream alive.

How Swansea edged Barnsley at Oakwell

Barnsley were given a rapturous reception by around 4,500 home fans, who were allowed back into the stadium for the first time since March 2020, and it was the hosts who had the first sight of goal, Romal Palmer slicing wide from the edge of the penalty area.

It was a frantic affair as both sides lacked composure in the final third, and it was the final ball that let Barnsley down midway through the first half as Freddie Woodman gathered Dominik Frieser's low cross ahead of Daryl Dike.

Ayew then produced the first bit of finesse of the first half to give Swansea the lead, arguably against the run of play. After latching on Kyle Naughton's ball in behind the Barnsley defence, Ayew cut into the penalty area and inside onto his left foot, before bending a low effort into the bottom corner for his 17th goal of the season.

Barnsley finally had a sight of goal as they looked to respond just before the break, but Michal Helik's looped header landed safely into the arms of Woodman.

Valerien Ismael wasn't happy with what he saw in the first half from his side and he brought on Carlton Morris for Frieser, and the change helped galvanise his side.

Morris was straight into the action, turning onto his right foot on the edge of the box before shooting low at Woodman. The Swansea goalkeeper should have done better with the initial shot, parrying the ball straight out, but he recovered quickly to palm Callum Brittain's follow-up wide.

Alex Mowatt's volley was then deflected wide, Dike's header was also off target before Woodman was called into action again to deny Cauley Woodrow as Barnsley piled the pressure onto Swansea.

Barnsley failed to capitalise on their dominance as Swansea eventually grew into the second half, and Jamal Lowe went close to adding a second, curling over the crossbar after creating space for the shot.

Matt Grimes' strike from 25 yards forced Bradley into action as Swansea looked to kill the game off, but there was still time for one final Barnsley chance.

Deep into stoppage time Morris ran across the near post and he flicked the ball towards goal. The back heel beat Woodman, but the ball rebounded off the crossbar and away to safety as Swansea held on to their advantage.

Barnsley's Valerien Ismael: "First of all I'd like to say a massive thank you to the fans because it was an unbelievable atmosphere. Maybe in the first 20 minutes we felt the emotion a little and we didn't play well in transition, and we didn't put the ball in areas we wanted, and that's why it was difficult to come into the game.

"The second half was much better and we should have scored, but it's half-time now and we have everything to play for. It will be good for us to play away without any pressure. We will play like the second half from the first minute, with belief and desire that we can turn it around." 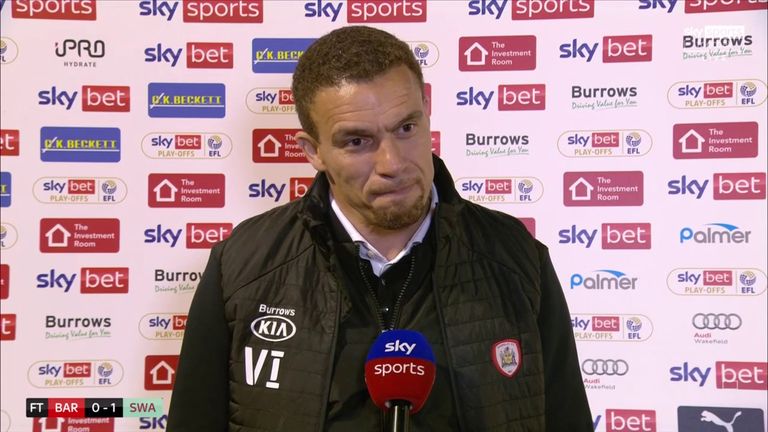 Barnsley boss Valerien Ismael believes his side need to show more desire if they are to overturn the 1-0 deficit to Swansea City in the Sky Bet Championship play-off semi-final.

Swansea's Steve Cooper: "It was a good effort from the boys. We knew the game would be a certain type, we could have come unstuck and we didn't. We showed bits of quality with the goal and other good moments. We certainly looked a threat.

"It was great to have supporters back. I can't wait to get back to our place on Saturday now. That'll be something to savour. It was fine margins, and I'm really pleased. But the final whistle in the next game is the most important one, and that's where our focus is." 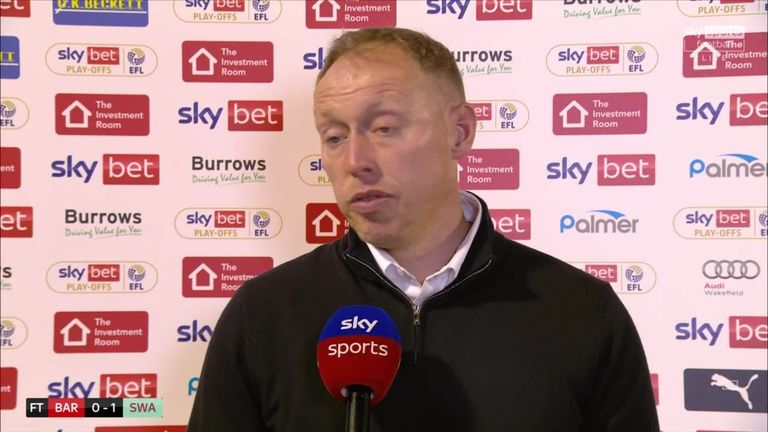 Swansea manager Steve Cooper claims that the Sky Bet Championship play-off semi-final is far from over despite beating Barnsley 1-0 at Oakwell and suggests they need to build on their performance.

Man of the match - Marc Guehi

Curtis Davies on Sky Sports: "It was an established performance from a young 20-year-old centre half. He just looked comfortable the whole game. He never looked in trouble, especially with the way they handled Dike and his physical presence.

"We were speaking before and I compared him to Fikayo Tomori and I almost think he's got a more natural defensive brain in terms of his positioning and knowing where to be. I think he's got a big future In the game."

The second leg will take place at the Liberty Stadium on Saturday, May 22 at 6.30pm, live on Sky Sports Football.